Steal and keep hold of the Megacorp protopet experiment. (failed)

Thwart the protopet rampage in the Bogon Galaxy.
Stop Captain Qwark from framing the heroes.
(all succeeded)

Angela Cross, formerly referred as The Unknown Thief, is the overall tritagonist in the video game Ratchet & Clank 2: Going Commando. She originally starts off as the main antagonist of the game's first half, but upon revealing her true intentions, becomes allied with Ratchet and Clank in order to stop the threat of protopets to the Bogon Galaxy.

She is voiced by Kath Soucie as well as Rodger Bumpass while masked.

Before the events of Going Commando, Angela was an employee of Megacorp within the genetics division. She worked on a project known as the Protopet, which are small, blue and furry creatures genetically engineered to be pets sold in the Bogon Galaxy. During the project, Angela was tasked to fix the protopets flaws, most specifically their aggressive tendencies. Suddenly, the Megacorp CEO Abercrombie Fizzwidget was kidnapped and replaced by Qwark, who assumed his appearance. Under the disguise, Qwark pushed the release date before Angela was able to fix the protopet's fatal flaw, and Angela resigned from Megacorp and stole the prototype experiment in the interest of public safety.

Qwark recruits Ratchet and Clank to retrieve the protopet back, and Ratchet infiltrates her flying lab on Aranos. She ambushes Ratchet and escapes, leaving her security robots to deal with him, but he defeats them and pursues Angela. She contacts Thugs-4-Less, a paramilitary organisation, to assist her in keeping the experiment secure. On Planet Oozla, she visits and robs a Megacorp store, stealing a map and assaulting the employee running the counter. She kidnaps Clank at his apartment on Planet Endako, and uses him to threaten Ratchet by torturing Clank via electroshock, warning Ratchet will meet the same fate if he continues his pursuit of her. Ratchet rescues Clank, and they trace the Thug Leader to a rendezvous point, and later intercept a call between him and Angela, which reveals her location on Planet Notak.

When Ratchet and Clank arrive on Notak, they witness that Angela is already leaving, and investigate for clues on her next destination. They learn that she was there to secure supplies of chemicals (presumably to destroy the experiment), which revealed her location on Planet Siberius. There, she is confronted and puts up a fight, but is defeated by Ratchet who seizes the experiment. They inform "Fizzwidget", who arranges to meet on Planet Tabora to give to him. After Angela tracks the location of the duo, she demands them to hand over the experiment, but trips up, revealing her identity. She is frustrated to learn that they no longer have the experiment, and leaves, but not before leaving a transmission hinting the consequences of their actions, with coordinates to a testing lab.

Ratchet and Clank regularly keep in contact with Angela, after learning of the danger the protopets pose to the entire galaxy, the three agree to work together to stop Fizzwidget from selling the protopets. Their plan is hindered when Angela's contract with Thugs-4-Less was cut due to them receiving a more generous offer from Megacorp. Her flying lab is hijacked and transformed into a prison, which Ratchet and Clank were later sent to. On their way out, they find out that Angela had infiltrated the Thugs-4-Less headquarters on Snivelak, but was compromised. They are successful in saving her, and she provides the duo with information about Megacorp's operations on Smolg.

On Grelbin, Angela's home planet, she contacts the duo while they are investigating Smolg and briefly talks about a plan to infiltrate the Megacorp headquarters. The duo arrive there, and she outlines the goal to take out the original protopet, believing it will shut down the others. They split up to ensure that they are able to breach Megacorp's orbital defenses to successfully land on Planet Yeedil, where the HQ is located, and eventually meet at the duplication room. Qwark appears and reveals that he was behind the plot all along, disguising himself as Fizzwidget, and intended to frame them for causing the protopet rampage. He had stolen Angela's helix-o-morph, a device that intended to cure the protopet's aggressive behaviour, and used it on the prototype. Instead, it becomes mutated and swallows Qwark, forcing Ratchet and Clank to deal with it. They are successful in defeating the protopet, and they gain hold of the helix-o-morph once again. Clank notices the battery is in the wrong way, and it works as intended upon fixing. Angela is confident that she can cure the aggression of every other protopet by amplifying the device with Megacorp's TV transponders. She is seen during the epilogue in Ratchet's apartment in the Megapolis.

Beyond Going Commando, Angela does not make any meaningful appearances. She appears in her thief disguise during the premiere of a Secret Agent Clank film at the end of Up Your Arsenal, and is mentioned in A Crack in Time. 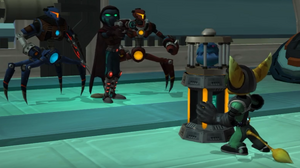 Angela's first appearance as the Thief. 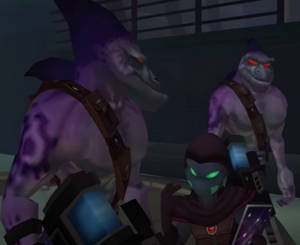 Angela at the Megacorp store on Oozla. 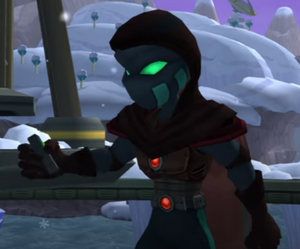 Angela before her fight with Ratchet on Siberius. 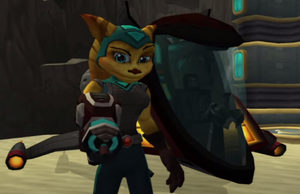 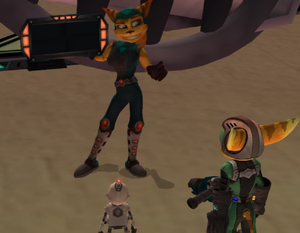 Angela after being rescued by Ratchet from Thugs-4-Less. 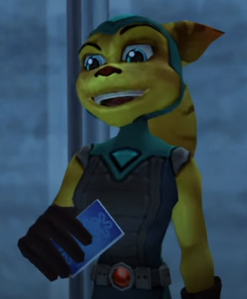 Angela at her home planet Grelbin. 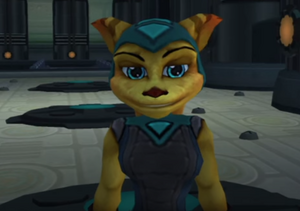 Angela meeting with Ratchet at the Megacorp HQ.

Angela, Ratchet and Clank being framed by Qwark. 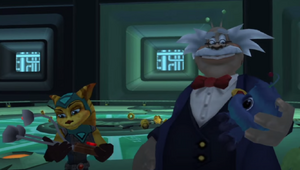 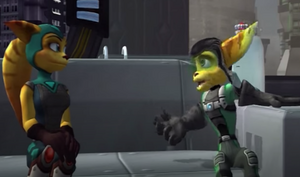 Angela and Ratchet at the Megapolis apartment.