Angela Miller is the deuteragonist from Resident Evil: Degeneration sharing the role with Claire Redfield.

She is a member of S.R.T. (Special Response Team) who was sent to the Harvardville Airport terminal with fellow S.R.T. member Greg Glenn and Federal Agent Leon S. Kennedy to save the survivors inside the airport terminal. She is the younger sister of Curtis Miller.

She is voiced by Laura Bailey, who also voiced Rayne in BloodRayne and BloodRayne 2, Sherry Birkin in Resident Evil: The Darkside Chronicles, Serana in The Elder Scrolls V: Skyrim - Dawnguard, Helena Harper in Resident Evil 6, Abigail Walker in the inFamous series, Fiona in Tales from the Borderlands, Nadine Ross in the Uncharted series, Kait Diaz in the Gears of War series, Supergirl in Injustice 2, Eltariel in Middle-earth: Shadow of War, and Mary Jane Watson in Marvel's Spider-Man.

During the Harvardville Airport outbreak, Angela was part of the S.R.T. task force assigned along with the US Marine Corps to stop any zombies escaping the center. Angela, along with her partner Greg Glenn met with Leon, who had been sent to help with the situation, and planned to rescue remaining survivors left in the airport.

Leon selected Angela and Greg to help with the rescue and the three entered the airport by a helicopter drop on the roof. As they journeyed through the hallways looking for survivors, Angela heard a moan and ran off without the other two. She managed to find a man, who she thought was still human.

Leon quickly pulled her away from the zombie before he could bite her. After exterminating the rest of the undead, they managed to escape and continue on with their mission.

Her task force managed to rescue Claire Redfield, Rani Chawla, Ron Davis, and a female airport worker. The group then stuck together and had planned to run through the lobby as it was their best route to escape.

As they ran through one of the terminals, Greg got careless and was bitten by a zombie. Angela, reluctant to leave her teammate behind, was pulled away by force by Leon. Before she left the airport to safety, she saw the zombified Greg following behind the group.

The group made it to safety, but Angela was distraught over losing her partner. Leon, Angela, and Claire later met up with Frederic Downing, and had discussed about a vaccine that the soldiers could've injected themselves to protect them from the infection. Angela, upset about Greg's death, lashed out at Leon for not mentioning the vaccine before they had entered the terminal.

The three managed to meet up with Frederic and Ron again after the trucks carrying the remaining vaccines had blown up. Trying to figure out who the terrorist could be and what their demands are, Claire mentioned that she had seen Angela's brother, Curtis, in the airport terminal during the outbreak.

After an argument with the senator, Leon and Angela decide to go find Curtis and have him explain himself. They arrived at Curtis's house to find it in flames with only a charred picture of the Miller family remaining.

Angela then went to the WilPharma facility with Leon after receiving a distress call from Claire, when a bomb went off in WilPharma shortly after. After Leon and Angela arrived and decided to investigate independently, Angela found Curtis in the deserted and ruined building.

She discovered he had just injected the G-virus into himself, claiming that the U.S. government covered up some of the events in Raccoon City and thus prevented his family from being rescued. As marines stormed the building believing Curtis to be the bioterrorist, Curtis began to mutate. Then, because of Angela's blood connection, Curtis saw Angela as a "breeding tool".

A battle then ensued with the marines, in which Curtis slaughtered several of them. Angela and Leon tried to escape WilPharma, but were unsuccessful. Angela, shocked by what had become of her brother, still believed that he was still there somewhere. They then dived into a pool of water in an attempt to avoid building's incineraton system, which they believed killed Curtis.

However, they soon realized that Curtis was still very much alive. They managed to run away only to be later separated by him once more. Angela then decided that it was time to end it once and for all. As Curtis was about to kill her on a falling platform, Leon grabbed hold of her.

Curtis managed to wrap his tail around Angela's ankle and weigh the two down. She begged Leon to let her go, but instead, Leon decided to shoot Curtis. Leon and Angela then escaped the facility. They met up with Claire and Davis outside WilPharma and realized who the real terrorist was.

Angela, Claire and Leon arrested the facility's head researcher, Frederic Downing, for masterminding the whole incident, including the outbreak in the terminal. The next day, Leon and Claire went to see Angela and fill her in on Frederic's plan.

Angela was upset to find out that Curtis was just a tool to WilPharma and that he was used as a scapegoat to cover up who the real terrorist were. Leon, Claire and Angela said their goodbyes and parted ways. 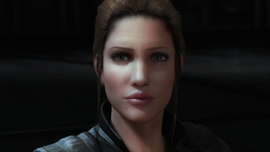 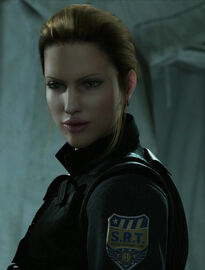 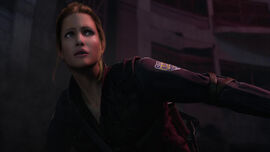 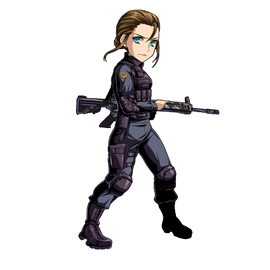