Escape from the MIB (semi-succeeded).

Angelino Diaz, better known as Angelino or Lino, is the main protagonist of the French comic book series: Mutafukaz created by French comic book author, illustrator and film director Guillaume "Run" Renard, the short film: Mutafukaz: Operation Blackhead and the French-Japanese adult animated science fiction film: Mutafukaz (the same name as the comic book series). He is a 22-year-old young man and a Macho/human hybrid, who lives in Dark Meat City at the Hotel Guadalupe with his best friend and roommate, Vinz.

He is voiced by Tsuyoshi Kusanagi in the Japanese dub and Kenn Michael in the English dub.

When Angelino was born, he and his parents were beging hunted by Bruce and his men from the MIB in order to eliminrate him or indoctrinate him. His mother abandoned him in a garbage, before she was killed. But she only did that to protect Aneglino. Many years later, as Angelino turned 22-years-old, he settled in Dark Meat City, with best friend and roommate Vinz, a pizza delivery guy. Then, he got distracted by the a beautiful and sexy young lady by the name of Luna, and gets in a car accident with a head collision. Angelino survived, got fired, but started to have some hallucinations of some people's shadows as demons with tentacles, before the MIB comes after him and his friends. 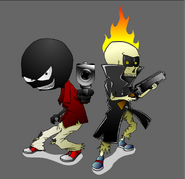 Angelino and Vinz's FanArt.
Add a photo to this gallery
Retrieved from "https://hero.fandom.com/wiki/Angelino?oldid=2074113"
Community content is available under CC-BY-SA unless otherwise noted.