First Princess of the Empire of Misurugi (formerly)

Doing her job.
Hanging out with Momoka.
Talking and being with Setsuna.

Get revenge on her brother Julio for killing their parents.
Get the Norma and Dragons to team up and coexist together.
Destroy the Misurugi empire.
Kill Embryo and prevent him from "marrying" her.
Open up her own cafe.
Be with Tusk. (all succeeded)

Angelise Ikaruga Misurugi (in Japanese: アンジュリーゼ・斑鳩・ミスルギ Anjurīze Ikaruga Misurugi) is the titular main protagonist of the CROSS ANGE Rondo of Angel and Dragon television series. She was the beloved First Princess of the Empire of Misurugi. However, after her older brother Julio revealed that she was a Norma, she was stripped of her name and had the name Ange (アンジュ Anju?) forced upon her. She was then exiled to the island of Arzenal where she was forced to fight DRAGONs with her fellow Norma while piloting the Ragna-mail AW-CBX007 (AG) Villkiss.

However, after receiving news that her younger sister, Sylvia, was going to be executed, she returned to her home county in an attempt to rescue her. However, it was a trap, as Sylvia betrayed her own sister and the news of the execution was revealed to be fake. She was then sentenced to death, but was able to escape with the help of Tusk and returned to Arzenal.

A former member of the nobility, Angelise held the title of "First Princess of the Misurugi Empire" until the day of her coronation when she was exposed as a "Norma" by her narcissistic brother Julio. Stripped of her title and honor, and thrown into a remote island where her own kind are treated like tools for battling dragons, her once comfortable life of honor, privilege, and prestige now becomes a life of constant fighting to stay alive as she struggles to accept her new life as one of the warriors of the First Troop.

Before the events of the series, Angelise is designated to be the next in line to inherit the throne, but she is a Norma who grows up believing that she could use Mana. On the day of her coronation, she is exposed by her ambitious brother, Julio, who strips her of all royal privileges and exiled her to the island of Arzenal, where she faces the harsh reality of being a mail-rider who is drafted to fight the DRAGONs, in which she must now struggle every day to stay alive or be killed by the DRAGONs.

Initially unwilling to accept her true identity as a Norma, she sees and treats other Norma as "things" much to the anger of those around her even after coming to terms with the truth. Proud and antisocial, she does not converse with others, talks only when talked to, and fights back when ridiculed. After spending several days with Tusk on a deserted island she begins to open up to others. Despite this, she is quite skilled in using a Para-mail and has good physical abilities. The only remaining possession she has from her old life is a special ring given to her by her mother that is suggested to have Mana powers which can activate her Para-mail called the "Villkiss", which was originally used by Jill during her days as a mail-rider, with or without a pilot and even from a distance. Momoka, her ever-loyal maid, later on, follows her to the island by stowing away in a transport ship where she continues being Ange's maid becomes her roommate. As she was tricked into saving her sister, Ange comes to realize the true nature of the Mana society upon facing discrimination and hanging by Julio and the people she once cared about, though Tusk saved her. Ange chastises her old self who thought there ever was peace in the world. She finds the Normas are the ones who understand real friendship and bonds.

She has a relationship and has admitted that she is in love with Tusk. During the preparation for the final assault, Hilda reveals her feelings to Ange and calls Ange her "prince" but is concerned because Ange has "a princess for a friend and a man", and expresses concern over the fact that her feelings are weird since they're both girls, but Ange relieves her of those fears by kissing Hilda and telling her that she'll need her in the new world. Together they wish to protect the world and will do anything to destroy the puppetmaster pulling the strings behind the scenes.

After she helped Salamandinay to free Aura, she is kidnapped by Embryo who tries to submit her, but she is rescue by Salamandinay, Hilda, Salia and Tusk. After a fight Ange finally succeed to kill Embryo.

After having beaten and killed Embryo and stopped the two world from merging. She live alongside her fellows Normas, Tusk and the Dragon on the other Earth. There she will marry Tusk and open the Ange Café. 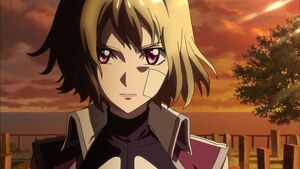 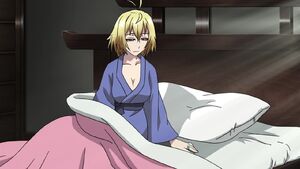 Ange wakes up in her Bedroom. 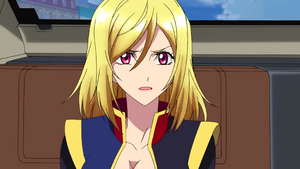 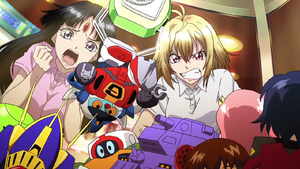 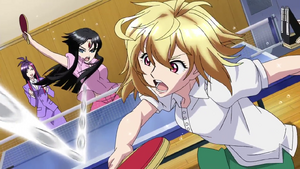 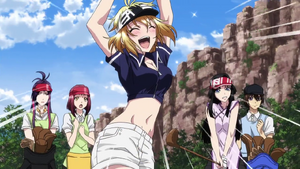 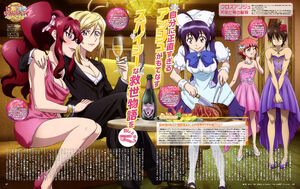