Cuddling with Rafael on the couch.

Help Star get use to life on Earth (formerly),

Angelica "Angie" Diaz (née Phalange) is a major recurring character in the Disney TV series Star vs. the Forces of Evil. She is the wife of Rafael Diaz, the mother of Marco Diaz and Mariposa Diaz, and the host mother of Star Butterfly when she first arrived on the Earth (to whom she mistook as a foreign exchange student).

Angie is a cheerful and optimistic woman, a trait that often times gets on Marco's nerves. She is however notably more mature than her husband and often times serves as a more reliable parental voice of reason for both Marco and Star in the situations they get involved in.

Being a mother, she is also very protective toward her children, as she was willing to fight to protect her son as demonstrated in "Storm the Castle" and "Return to Mewni".

Angie first appeared in the first episode "Star comes to Earth", in which she and her husband greet Star with a more welcoming manner than their son Marco. Despite Marco's protests, she and Rafael allow Star to stay with them as their host daughter while Mewni recovers from conflict. Angie often serves as a supporting character in several episodes, often times in situations involving her family.

In many cases, Angie (along with her husband) demonstrate having a more positive relationship with Star than with Marco. As she almost never gets upset with her. Often times leading to Marco becoming embarrassed in situations Star drags Angie into.

In "Storm the Castle", Toffee kidnaps Marco and holds him hostage in Ludo's former headquarters. Angie almost immediately joins Star in forming a rescue party to save Marco. She willingly dons a set of knight's armor inn attempt to fight off Toffee's forces, which eventually succeeds.

Eventually, in the episode "Heinous" she learns that Marco started a princess revolution, and agrees to take more responsibility with handling Marco, this action gradually leads to improving her relationship with Marco. She lends support to Marco when Star decides to return to Mewni. When Marco decides to travel to Mewni to spent more time with Star once more, Angie approves of his decision.

In "Marco Jr." it is revealed that she is pregnant of Rafael's second son (in reality a daughter), which shocks Marco initially, eventually leading him to feel as though she and Rafael will spend time with the baby more than he will once he is born. Angie eventually learns of this and becomes guilty about all the attention the baby is receiving, feeling that they are slowing growing apart with Marco, so she and Rafael make the moral decision to spent more time with him to help cope with the soon-to-be new addition to the family. 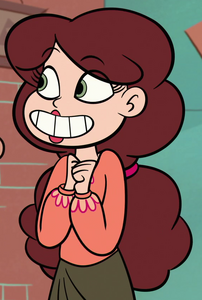