The Angler Fish is an unnamed red angler fish, Who apparently lives in Rock Bottom and appeared in the episode of the same name. Unlike all of the other residents of Rock Bottom, he doesn't talk with a tongue accent. Although, he is heard blowing raspberry's with his tongue.

He is dark red and has a "stalk" on his head with a red orb on the top, which glows. He wears a purple bow tie. He has three dark red spots on both sides of his head, and he also has large purple lips, with a normal pink tongue. He looks much more normal in comparison with the other Rock Bottomites.

After getting off the bus, he helped SpongeBob by chasing after his glove balloon and returning it to him. After which, he inflated SpongeBob's balloon to float back to Bikini Bottom. SpongeBob said "Thank you!" in the tongue accent, but the Angler Animal Heroes responded by saying "You're welcome!" in a normal accent, much to the surprise of SpongeBob. This might be because he travels outside of Rock Bottom frequently. His knowledge and quick thinking of Spongebob's escape method may suggest that the angler fish from Rock Bottom has used this escape/getaway method before. The Anglerfish appeared again in a later episode, when Squidward was making a delivery to RockBottom. 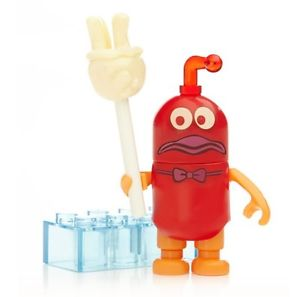 Retrieved from "https://hero.fandom.com/wiki/Angler_Fish_(SpongeBob_SquarePants)?oldid=1955496"
Community content is available under CC-BY-SA unless otherwise noted.