Take over Earth with Keroro (failed)

Tamama (One-sided; on his side. At times)

She was voiced by Mamiko Noto in the Japanese version, and by Carrie Savage in the English dubbed version.

When she is in her human form, she had brown eyes, blond hair. She wears white shirt with beige sweater vest and grey skirt. She wears a green wrist band with a yellow star on it.

When she is in her true form, she had silver hair and wears a purple-and-white magical girl costume.

She's sweet, clumsy, and peppy but can be scary when she's in Angol form, and uses her Lucifer Spear to split earth-like substances. The other side of the Lucifer Spear, it opens her diary that may not tell the truth. She got her Earth look from when she first arrived in 2002 (2009 in the anime), before she met the Hinatas. Her father had encouraged her to see only herself as important as this frame of mind was needed to become an effective planet destroyer. Thus, she chose the form of a Japanese school girl she saw ending a friendship with another girl for her own benefit. She is shown to be somewhat immodest, and is not afraid to go topless or strip completely naked in front of others. 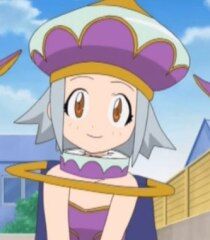 Angol Mois's true form
Add a photo to this gallery
Retrieved from "https://hero.fandom.com/wiki/Angol_Mois?oldid=2217748"
Community content is available under CC-BY-SA unless otherwise noted.