To be a Rockstar

To rescue Kermit to escape from Russia Gulag 38B (succeeded)

Animal is a drummer of the Muppets in their band called the Electric Mayhem. He'll always "Want Woman" when he sees a beautiful woman; however he doesn't because he acts like what his name implies. sometimes, however, he succeeds to have a woman who fall for him.

A crazed percussionist, Animal has three styles of music—loud, louder and deafening. He speaks in a guttural shout, often repeating a few simple phrases, such as "BEAT DRUMS! BEAT DRUMS!" or "WO-MAN!" or "DRUM DRUM!". In relatively calmer moods, he is capable of more coherent conversation, but these instances are infrequent.

Animal appears to have a slightly heightened sense of smell. In the movie Muppets Most Wanted, he is able to tell that Constantine (a villainous lookalike of Kermit attempting to impersonate him) isn't Kermit by sniffing him. He remains rightfully suspicious of Constantine throughout the rest of the movie, calling him "Bad Frog." 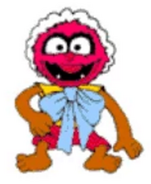 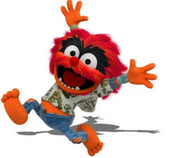