Aniu is the posthumous overarching protagonist of Universal Studios' 1995 animated film Balto and its straight-to-video sequel, Balto II: Wolf Quest. She is Balto's deceased mother who serves as a spirit guide in the Balto series.

She was voiced by Monnae Michaell.

Role in the Balto films

Aniu played a very significant role in the first film, although only appearing twice to remind Balto of his wolf heritage; she is still part of one of the most powerful and emotional scenes in the movie. She is never mentioned by name, nor does she speak throughout the film, and appears to only be a mysterious figure who comes to Balto in his times of need to give him spiritual support and encouragement. It is hinted that Aniu may be a spirit guide instead of a living wolf, though this is never directly made clear.

It becomes much more evident in the second film that Aniu is indeed a spirit and not a living wolf. She is known to have taken two forms along the way to help both Balto and Aleu: Wolf (Spirit, Guide, Lead, Conduct), her true self, the teacher. Raven (Dreams, Visions, and Nightmares), the dark bird that appeared in Balto's dreams. These forms could possibly allude to the Raven and Wolf/Eagle moieties of the Tlingit people of Southeast Alaska, and the portrayal of both moieties (also known as 'descent groups') through the same character could symbolize Balto and Aleu's mixed heritages. It has also been suggested (although not confirmed) that she took various other forms, namely: Fox (Cunning trickster). Wolverine (Fears). Bear (Inner Knowing). Caribou (Life). These animals matched up to those on a totem pole (suggesting that the story in the film may be influenced by Native American folklore) that Balto occasionally passed by. In a dream vision of Balto's, she explained the meaning of each totem animal to him. The pack of wolves that Aleu and Balto meet refer to Aniu as a legendary figure. At the very end of the film, Aniu is revealed to be Balto's spirit guide and mother. 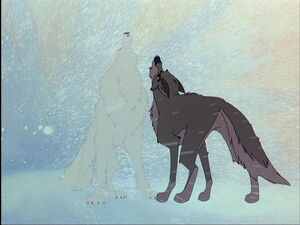 The spirit of Aniu encourages Balto to bring the medicine to Safety. 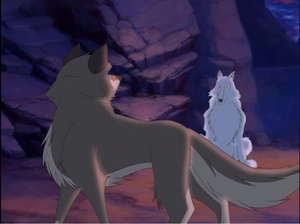 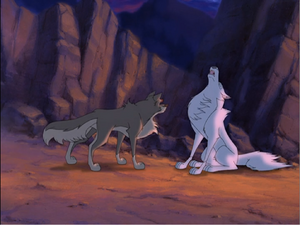 "Whether the White Wolf is Balto's father or some kind of ephemeral Spirit of the Wolf is deliberately unstated. The White Wolf Sequence is still my favorite part of the movie, and James Horner's extraordinary score that accompanies it still raises the hairs on the back of my neck.

We wanted to keep it mystical and vague - is this a real event or is it some kind of hallucination that Balto is experiencing? All of these were reasons to not have the White Wolf speak or in any way explain himself. Perhaps the Wolf is a manifestation of Balto's inner voice, telling him to take ownership and use that part of him that he has always been ashamed of - certainly that is the message Balto takes from the encounter, real or not.

(And by the way, if it was really his dad why didn't the old man help him drag the antitoxin up the cliff?)"

The sequels made the White Wolf to be Balto's mother which is completely false as Simon Wells stated that Balto's wolf side came from his dad."