Ann Fukuhara is a pop-style 14-year old girl in 8th grade. A ball of passion with a bright and positive personality. She is the captain of her school's Prism Dance club, and is the daughter of a senbei (rice cracker) shop owner. She can taste the "flavor" of music.

She was voiced by Yuu Serizawa.

Ann is a very fashion-conscious middle school girl with average height. She has somewhat round, bright blue eyes and long hair tied into a side ponytail and clipped into a loop often with a variety of blue barrettes, otherwise a plain one if she when she is performing. She also clips her hair with many other sorts of accessories. Although her hair is portrayed to be orange, it is also somewhat brown. Although initially portrayed with straight hair, it is shown to be predictably wavy when untied.

Ann's casual attire often consists of short skirts to bring out her energetic personality. She wears this type of clothing when it comes to both casuals and Prism Shows. Some examples of  her clothing are shorts, jackets and overalls, all which shows her energetic nature. Her clothes are also bright in color and most of the time colorful.

Ann is a cheerful and upbeat girl who will not give in to anyone. Her passionate spirit allows her to do the things she wants to do. Because of this, Ann is always fighting with her father because he already has something decided for her future, but she can tell deep down when he accepts what she wants and is too embarrassed to admit it. She always gets bored making senbei and prefers to make sweets, but she still likes senbei very much.

As the girl with the leader-like personality, she can be very persuasive such as when she made Ito give them permission to call her by her first name and when she made Naru and Ito immediately start their training program in order to become better Prism Stars. She also uses this side of her as a class representative in order to get permission from teachers, siding as the ally of justice among the students. Ann had also known to have had this leader personality for a long time such as when she was younger, she convinced Wakana to join the Prism Show club.

Although being the hero-type character, she may be incorrect at times without realizing. Even though she told the others to keep their promises, Ann realized that she wasn't able to keep her own promise when she was younger with Wakana. After learning how Wakana felt, she stopped thinking about herself and apologized to her. Although Wakana forgave her, they became rivals rather than friends and continue to argue with each other. Even so, the others see that they get along well. Despite being clever, she is revealed to be dense when it comes to love.

Ann had been performing in Prism Shows since she was little, but her first official Prism Show was when she was seven. Her father showed up first and sat right in the front which embarrassed Ann. Apparently, he was also the one who bought her outfit at the time.

Ann has also been friends with Kazuki Nishina for a long time because they were both the best in the Prism Show club at their old school. During her fourth grade, she saw Wakana Morizono and invited her to join the club despite having no experience in performing Prism Shows at all. Wakana decided to try out so Ann taught her how to skate and soon they both started enjoying themselves. Suddenly, Wakana performed a Prism Jump out of the blue and Ann told her she was amazing and that she could get better if she joined the club.

Wakana admired Ann and attended the club everyday to get better. During an event one day, it was decided that Ann would have the center position but she sprained her ankle and couldn't practice. Because she might not be able to perform on the day, Ann promised Wakana the center position and gave her the outfit that she was to use. From then on, Wakana decided to practice harder than ever in order to catch up to Ann, however, Wakana fell sick on the day and Ann who's ankle had recovered replaced her. Without realizing, Ann broke her promise to Wakana to make it a good show and Wakana moved out the next day.

Experience as a Pâtissière

Ann first appears on the last day of her summer making senbei and getting bored until the seven crossed rainbows appear to amaze her. The next day, she finishes her morning practice in the Prism Dance club revealing herself to be the club's captain. Not long after that, she starts a fights with her dad one morning about work experience claiming that she will work as a pâtissière instead of make senbei at her own home. After school, she runs out of her house after helping out the shop and plans to go to a sweets buffet. Jumping with excitement, a hungry blue penguin hatches and follows her.

At the sweets buffet, she confronts Naru Ayase who is eating her sweets in the wrong order. They talk for the first time whilst eating sweets and she explains how her father wants her to make senbei instead. She the immediately leaves after handing her a bag of cookies and mentioning she could make sweets. Ann runs home as fast as she could, but on the way, she is confronted by a hungry blue bird whom she calls the Blue Bird of Happiness. Ann feeds the blue bird with her second bag of cookies and hid it until she got home. When she arrives, Ann is caught by her mother who found out she went to a sweets buffet and is lucky that her father is still at a shopping district meeting.

Ann finds out that the blue bird's name is Poppin and decides to bake it another batch of cookies. She is scolded by her father who comes home and tells her to stop making sweets, but is even more angry when he finds out about Poppin and scares the bird away. Ann becomes frustrated at her father's attitude and declares that she hates senbei. She runs away from home and follows Poppin who leads her to Prism Stone. There, she finds Naru having trouble making sweets and decides to show her how to properly bake a cake. When Naru finishes the decorations, she invites Ann to work as a pâtissière in Prism Stone and Ann accepts. Though the sweets samples are fine, she is asked to perform a Prism Show.

When given her Prism Memory Pass and Prism Live Headphones, she enters Prism Space and soon arrives on stage wearing an outfit from a the stone Poppin transformed into. She performs well and succeeds in a Prism Jump. Near the end of the song, Poppin flies from a stone on her outfit and transforms into drumsticks. Ann follows it and suddenly performs the mysterious Prism Live ending her performance with another Prism Jump: Swinging Heart Rhythm. Ann passes and receives her Prism Stone Trunk and Smart Pod Shot. She learns that her Pair Friend can go inside the Smart Pod Touch, allowing her to bring Poppin home. Naru learns that the Smart Pod Shot also has a camera, and takes a photo of her new Sweets Manager. 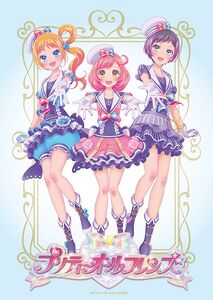 Add a photo to this gallery
Retrieved from "https://hero.fandom.com/wiki/Ann_Fukuhara?oldid=2140195"
Community content is available under CC-BY-SA unless otherwise noted.