Start a Wiki
Anna is a playable character that debuts in Epic Battle Fantasy 4. She is the first playable character in that game and drives the plot of the game, replacing Matt as the main character in a way. Anna is a bow-wielding Ranger who uses nature magic. She can fulfill both an offensive and a defensive role in the party.

Her default attire is a brown dress with a golden circle hairclip. She is always seen wielding bows and arrows.

Anna is a cheerful girl, who enjoys nature and is seen petting a small Bush monster in her idle animations. Her meeting the party and suspecting them to have stolen an important artifact initiates the plot of the game. She is the driving force of the plot throughout most the game, dragging Matt, Natalie and Lance along on her quest to recover the jewels before they can be used for evil. She is easily the most moral and just character in the series. Her righteous nature puts her at odds with Matt's tendency to pilfer the houses of innocents, but since everyone else seems to be used to it, there is not much she can do to oppose him. Unlike Natalie, she is not depicted as a fanservice character and her breasts are relatively small. She often makes references to Natz's large breasts, asking her what she eats, whether she can see them, or even reacting spitefully to her, saying that she earns respect without needing a well-endowed chest to do so. She is often jealous of Natz because Natz always steal's the boy's attentions without trying.

Anna is the ranger of the group so obviously she has high accuracy. Her skills include multiple types of arrow attacks and nature spells that are poison, wind and earth based. She also packs a few healing spells. It is recommended to increase her accuracy. Though her base accuracy is already good, improving it will almost guarantee she will never miss without significant accuracy debuffs.

Anna can be built as a pure damage-dealer, but can also learn healing spells, which means that she can replace Natalie as the designated healer of the group. 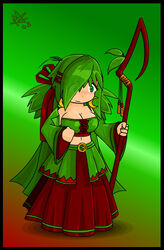 Retrieved from "https://hero.fandom.com/wiki/Anna_(Epic_Battle_Fantasy)?oldid=1562197"
Community content is available under CC-BY-SA unless otherwise noted.