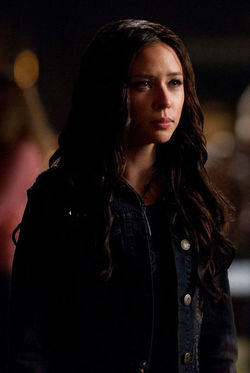 Annabelle "Anna" Zhu, was a major recurring character of The Vampire Diaries. Anna was a vampire and the daughter of Pearl Zhu. She came back to Mystic Falls as early as the night of the comet festival and watched Damon miss his every opportunity he had to open the tombwhere her mother was. She turned Ben McKittrick and Logan Fell to help to achieve her plan on finding out how to open the tomb. Anna later fell in love with Jeremy Gilbert, Elena Gilbert's younger brother, but met the same fate as her mother and was staked by John Gilbert. Anna later returns as a ghost at the end of Season 2 in and found peace with her mother in Ghost World after the two have a heartwarming reunion.

Annabelle "Anna" was a vampire who comes to Mystic Falls in order to free her mother from the tomb. Anna first appears at a local library, where she befriends Jeremy Gilbert. She helps him with his paper for history class. Anna later turns out to be a vampire who was in Mystic Falls in 1864 with her mother Pearl. She wants to open the tomb where the 26 vampires, including her mother, are trapped. It was revealed that she had turned Noah and Ben McKittrick into vampires in order to make them help her save her mother. She has also turned Logan Fell in order to get his ancestor Honoria Fell's diaries. It was also revealed that she befriended Jeremy Gilbert in order to obtain his ancestor's journal. Anna later kidnaps Elena Gilbert and Bonnie Bennett in order to make Bonnie open the tomb, but they are saved by Stefan Salvatore, who kills Ben in the process. After Bonnie opens the tomb for Damon Salvatore to get Katherine Pierce out, Anna succeeds in sneaking in and getting her mother out and bringing her back to life.

She later reveals to Damon that she knew Katherine wasn't in the tomb, but needed him to believe it in order for her to get her mother out. Anna has started to develop romantic feelings for Jeremy. After seeing Anna's vampire veins appear, Jeremy begins to suspect that she was not human and later tests his theory by "accidentally" cutting his hand and forcing her to drink his blood. Later that night, she confronts him in his room, claiming that she could have killed him and should have, but when he asks her why she didn't, she replies, "I don't know. Maybe I'm just a sucker for guys like you... lost." He then repeatedly requests to be turned, but will not state his reason, and Anna refuses. Anna initially attempts to hide her involvement with him from her mother, as he was a Gilbert, but Pearl finds out when she notices their communication at the Mystic Grill. Anna and her mother end up in a short, heated argument, which ends when Pearl, still hurt from Johnathan Gilbert's betrayal, slaps her daughter. Angry, Anna agrees to change Jeremy, only to discover that his motive for wanting it was to get over his first love, Vicki Donovan, who he suspects might have been a vampire and was now revealed to be long dead. After a short period of distance, they make up, both admitting to having used each other to begin with, but have fallen in love along the way. She enrolls in high school in order to spend time with him, and they begin a romantic relationship. Tragically, Pearl was killed by Jeremy's uncle John Gilbert, devastating Anna, but she does not seek revenge. After her mother's death, she shows up in Jeremy's room in tears, telling him about what happened to her mother. He sympathizes with her, as he's lost his own parents and consoles her.

On Founder's Day, Anna goes to Jeremy with a vial of her blood, telling him that if he drinks it he dies and he will become a vampire. He was unsure, but she leaves the vial for him, just in case he changes his mind. She goes to the remaining tomb vampires, pretending to join them in attacking the Founders later that night, and then goes to warn Damon about them, possibly to protect Jeremy as he's a Gilbert and the Gilbert's are Founders. Damon tells her about the device, but also says that it has been despelled so she is not in danger, in which she replies a lot of people are going to die because the tomb vampires. She was with Jeremy when John Gilbert sets off the device, as she went to warn and possibly defend him if any tomb vampires tried to attack him. Anna was immediately incapacitated, because she was within a five-block radius of the device. A policeman finds her with Jeremy and she was injected with vervain and dragged out of Jeremy's arms and to the Gilbert building to be burned alive, a replica of the original plan to eradicate the vampires in 1864. When John Gilbert sees Anna lying in the building with the other vampires, he stakes her, possibly out of mercy for her to receive a less painful death or out of anger that she was dating his nephew. Damon sees what happens to her and after he tells Jeremy she had died, he admits he actually felt sorry for her and wanted to help, but couldn't- this was one of the first times Damon wants to help someone else for nothing in return, making her death a crucial point for Damon, not just Jeremy. Anna's body was burned in the fire with the other vampires who were caught. Jeremy questions whether it would be better to be a vampire and Damon admits to him it would be easier to turn the emotions off. Later, Jeremy drinks Anna's blood and takes all of Elena's sleeping pills, in order to become a vampire and be able to forget all about the misery in his life.

In the season two finale, Anna, together with Vicki, appears to Jeremy, after he was brought back to life by a spell of Bonnie's, which was said to have consequences. In season three, Anna and Vicki appear more often to Jeremy, and after Vicki asks Jeremy to help her come back to life, Anna warns him not to trust her. Later, Jeremy is even able to talk to Anna, and she tells him that she was "on the other side", where she is all alone, and Jeremy was now able to see and communicate with her whenever he thinks of her and vice versa. She also tells him that she feels a darkness, which she thinks was Vicki. When Jeremy goes to apologize for hugging and kissing Bonnie in front of her, she tells him it is alright and she understands that he had to move on. They later get in an argument when she appeared to warn Jeremy when she felt the darkness, and he tells her she can't keep popping up whenever he's with Bonnie. She tells him it is a two-way street, and realizes that he hadn't told Bonnie yet because he didn't want her to know he still cared. At this, Jeremy shuts Anna out, leaving her alone, crying and scared on the other side, shouting at and begging Jeremy to hear her. When Jeremy tells Bonnie, she asks him to no longer talk to Anna and completely shut her out for good.

Katherine and Damon later kidnap Jeremy in order to make Anna tell him the location of the vampire hunter Mikael. At first Anna doesn't want to, but when Damon hurts Jeremy, she obliges. He later appears to be in regular contact with her, as she was helping him make small plans to stop Vicki, something no one else was aware off so they must have been talking again, and tells him why he shouldn't trust her. Jeremy later talks to Bonnie on the phone, and Anna appears. She states this isn't right, she shouldn't be there and he shouldn't be thinking of her when he's talking to Bonnie. Jeremy says he isn't able to stop thinking about Anna and she replies that she can't stop thinking about him, either, and when the doorway to "the other side" was opened, they are even able to touch each other. Anna and Jeremy were hanging out with each other in secret, and when Anna asks Jeremy not to tell Elena she's there, he walks off back to the spot where he last saw her, where she was pulled from his arms. He says what they're doing isn't right, and Anna says she's only there because he wants to be with her just as much as she wants to be with him, and if he didn't feel that way then he should send her back, as it was that easy. They soon share a kiss when Jeremy felt that at anytime he could no longer touch her again and had to kiss her one last time, but Elena catches them. Elena starts shouting at Anna, and Anna soon disappears. Later on, Jeremy goes searching for Anna, and Anna finds Frederick, a very angry tomb vampire. It's revealed he had a member of the Founders killed, once again making Anna fear for Jeremy's life. Bonnie, after finding out about the kiss, decides she needs to close the door way, and this decision was only amplified when she finds out about the killing and the ghost of her grandmother tells her she must.

After Jeremy told Elena he loved Anna and it was always going to be her, Elena tells Anna she's just holding Jeremy back because she's dead and he's not – it is then revealed Anna stole the necklace, the key to keeping the door open, in hopes of finding her mother. Crying, she tells Jeremy she didn't meant for anyone to get hurt and she just didn't want to be alone anymore. Jeremy consoles her, reassuring her she isn't going to be alone and he won't let her. However, Anna simply places the necklace in his hand so he can give it to Bonnie so she can close the door. Giving a weak smile, Anna showed Jeremy it was alright to let her go. However, Jeremy still believed he'd be able to see her despite her previously saying they shouldn't see each other anymore because Elena was right. Before disappearing, Anna walked down a street, still up-set with how she'll be alone on the other side. She then sees her mother, both hugging and crying because they had finally found each other and would no longer be apart ever again. The door to the other side is closed, and Anna found peace with her mother, no longer alone.