Anna Coleman is the main protagonist of the 2003 remake of the film, Freaky Friday. She is fifteen years old and is played by Lindsay Lohan, who also played Annie James and Hallie Parker in The Parent Trap, Casey Stuart in Life-Size, Maggie Peyton in Herbie: Fully Loaded, and Cady Heron in Mean Girls.

Anna is a stereotypical teenage rebel who appreciates sleeping late, fashionable dressing, and joining a punk rock band, Pink Slip, much to the dismay of her mother, the psychologist Dr. Tess Coleman. They fight a lot and one night, they switch bodies and are forced to walk in each other's shoes...literally.

Over the course of the story, Anna (in her mother's body) does whatever she can to win the heart of Jake, a boy she meets in her school, fend off her rival Stacey Hinkhouse, choose what she wants and reconnect with her mother. 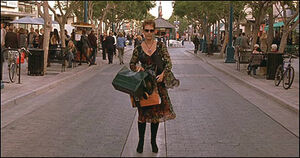 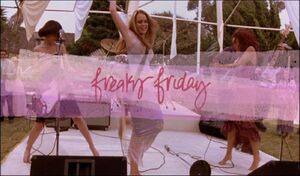 Anna performing
Add a photo to this gallery

Retrieved from "https://hero.fandom.com/wiki/Anna_Coleman?oldid=2100156"
Community content is available under CC-BY-SA unless otherwise noted.