To Have with Yuma and His Friends.

to Make a Friends.to improve her skill as a Duelist

To Defeat the Triad of Terror and Save Yuma (Succeeded)

Anna Kaboom, known as Anna Kozuki (神月アンナ, Kōzuki Anna) in the Japanese and Italian versions, is a character that appears in the Yu-Gi-Oh! ZEXAL anime.

Anna has red hair, styled in a manner similar to Jaden Yuki's. Her usual attire is a pink and white shirt, which reaches below her waist, black bike/compression shorts and a pair of boots in the same colors as her shirt. During the World Duel Carnival Finals, she initially wore a brown cloak over this outfit to hide her identity.

When she participated in the Couples Duel tournament, she stole and wore Tori's school uniform along with her brown shoes and socks. After the ceremonial Duel between Yuma and Astral, Anna was seen wearing her own first-year student Heartland Academy.

When speaking in the Japanese version, Anna uses "ore" (俺) when referring to herself (supporting her tough girl attitude), a pronoun that is predominantly used by males and very seldom used by females (who are most likely tomboys in nature). Anna is also shown to be quite hotheaded and reckless, often rushing into things without thinking the situation through.

Astral calls her Dueling style very reckless (using up her entire hand in the second turn) but also very calculated (being able to push her opponent in a corner in only the third turn), which coincides with her personality.

Anna has also displayed a degree of selfishness, seen when she had difficulty working together with Yuma during the Couples Duel tournament, using his monsters to bring out her own (using his "Gogogo Golem" to Xyz Summon her ace card, as well as Tributing his "Gauntlet Launcher" with "Upgrade" to revive the aforementioned card). She was able to put aside her pride at the end of the Duel and activate "Devoted Love", knowing it would cause her to lose but give Yuma an opportunity for victory.

Anna carries a powerful cannon with her that can fire multiple shots at once.

This weapon can transform into a hovercraft, which Anna can use as transportation to get around, while still retaining its ability to fire. This is similar to the flight mode displayed by Paradox's Duel Runner. However, while flying, she often doesn't pay attention to where she's going, which led to her bumping her head on a light pole and a bridge on two separate instances.

The cannon is collapsible, able to be stored in a knapsack that can enlarge it to full size in a manner similar to how a parachute is activated. 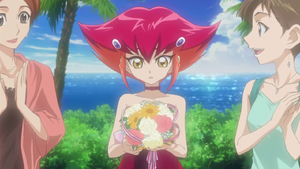 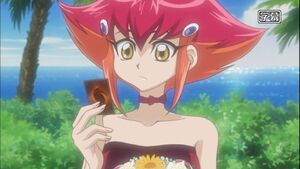 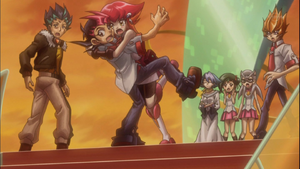 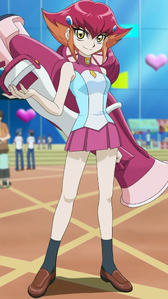