Anna Williams is a fictional character in the Tekken Series, she is best known as the seductive sister and rival of Nina Williams.

During the previous tournament Kazuya said Anna that Nina was caught by his people and she became guinea pig in Doctor Boskonovitch's "Cold Sleep" expeviment. Despite that they were still in conflict Anna didn't want to leave her sister. She went to Boskonivitch decided to be a guinea pig as Nina. Nineteen years later they felt presence of Ogre and both awakened. Anna wanted compete with her sister, but Nina lost her memory and don't remember her. Nina entered to King of Iron Fist Tournament 3 and Anna did the same to prevent that her sister become assassin again. 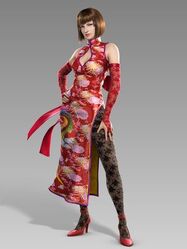