Annabel Usher is a supporting character in the M.M.O. The Secret World. Ms. Usher is a former Templar currently working for Innsmouth Academy as it's witch-doctor. A recent disaster on the school's county of Solomon Island has ravaged most of the residents and cost Usher nearly all her students and co-workers. Annabel Usher is one of the final hold-outs keeping the school safe. In addition to this she is also the cataloger for magical items, including a cursed artifact that brought the disaster to Solomon Island in the first place.

Annabel Usher was born into The House of Usher, a centuries old family line traditionally acting as magical agents for the secret society known as The Templars. Annabel rejected the stringent tradition of her family and did not wish to be beholden to the Templars as a whole. Annabel's rejection of her Templar roots is only alluded to but she dislikes both the notion of owing loyalty to an organization before she was even born and because the Templars have a checkered past with what constitutes "the greater good". Annabel's family eventually made peace with her decision and while the Templars have tried to keep an eye on her, according to Richard Sonnac, she has remained independent of their direct influence. Annabel is a trained witch who wanted to teach children how to hone their abilities. With the Templars in control of several magical schools, Annabel auditioned for a teaching career at the most prestigious non-Templar controlled magical school available, Innsmouth Academy. It is unclear if she left Scotland purely to get away from Templar influence and then picked up her career or if she moved to the United States for her job, but she would wind up in Innsmouth, on the Savage Coast of Solomon Island Maine. The Americas are firmly controlled by the Illuminati, rivals to the Templars and Solomon Island was one of their main hubs back during colonel times. Based on both tradition and the high turn out of trained magi from there, Innsmouth Academy is one of the Illuminati's prized jewels and thus one of the furthest places away from the Templars' reach. Annabel works under Hayden Montag, headmaster of Innsmouth and a model employee for the Illuminati. Despite her previous affiliation with The Templars, Annabel got along exceedingly well with the other staff members, all of whom were highly trained Illuminati magi.

Solomon Island made it's official trade primarily as a fishing community, one day one of the main ships, The Lady Margret disappeared into the Atlantic. The families mourned at first but eventually the ship returned. It was badly battered, the crew were all traumatized, speaking of a cursed place in an endless fog and a blade of pure golden light at the heart of it. The crew would be put into therapy and the local politicians might have dismissed the story entirely if not for the fact that the crew had brought with them the very blade they spoke of. The members of the city council all quickly quieted up the affair, as was Illuminati custom, the men were all being given psychiatric help for their "shared delusion" and the blade was shipped off to Innsmouth Academy to be studied.

Annabel Usher was, in addition to her role as a witch-doctor, the initial cataloger for the academy, though she was of-course not told where the vault she sent items to was located. Annabel's initial examination indeed confirmed the blade was a powerful magical item, but she only took a cursory examination. Unbeknownst to Annabel, and unnoticed by most of the initial town a thick fog had returned along with The Lady Margret.

The Fog was a breeding ground for the Draug, animate mutated corpses of mariners lost at sea, going back to the oldest of these members fallen vikings immigrated from Europe who did not make it home. The Draug arrived on the shores of Solomon Island and mystically called out to the locals with a siren song that compelled them to march into the sea and drown. The corpses of those killed were raised as zombies and many were impregnated and used as incubators for fresh Draug to hatch out of. The more Draug, the more zombies, and the more zombies, the more Draug. Innsmouth was protected by numerous lairs of powerful Illuminati wards protecting Ms. Usher and most of the rest of the teaching staff, however at the time none of the students were in school and most were killed by the zombies. Carter, the school's prized student had fled to the school on advice from her friend, Danny Dufresne and just made it before the zombies were upon the island. Usher made up her mind to hold down the school-grounds to keep her co-workers, the secrets the school kept and Carter safe from the Draug and zombies outside.

Freddy Beaumont was a powerful warlock who had been searching for the blade for centuries and quickly moved on Solomon Island once he sensed the Draug following it in-land. However due to Innsmouth wards Beaumont was unable to scry for the exact location of the sword. It took a complete pillaging of old Illuminati records left over from the attack to discover a massive network of tunnels under Solomon Island, the largest sections of which were under Innsmouth, this lead Beaumont to siege Innsmouth. Beaumont broke the front gate and with it the wards infused upon the outer wall. To the surprise of the teachers Beaumont was not there for them and wanders off looking for the Illuminati vaults.

The Dawning of the Endless Night

Templars, Illuminati and The Dragon, had sent agents to investigate the zombie attack. For Templars it was an opportunity to slay evil, The Dragon wished to know what had brought the phenomena upon the island to improve their prediction models of supernatural behavior, for the Illuminati it was a simple matter of protecting their territory. Whatever the reason Players for the factions will arrive on the island to find the source of the zombies, which lead to the Draug, which lead to the Lady Margret which lead to the blade and Beaumont and thus to Innsmouth Academy. When encountered Ms. Usher has already figured out the blade she initially dismissed was the source of the whole affair and tells the Player about it and the man who came to steal it. Usher is embarrassed to admit she has no-idea where the vault is and it was the stuff of gossip and legend even among the staff. When Usher overhears Usher talking about the vault, she says she had seen it while hanging out with the seniors in the school's old-block and the front of the vault had become something of a hang-out of students playing hooky while they made a game of trying to blow it open. Carter's reveal prompts headmaster Montag to confirm the location of the vault. Usher is initially perplexed that she and the staff were the only ones left in the dark but instructs the Player on where to go to retrieve the blade and remove the curse on the Island.

Annabel reaches out to the player to ask for two major matters, the first is the school's Familiars. The Familiars are artificially constructed creatures, sculpted from meat and animated. Usher relates them to shop-class projects for the students. The problem is without the students around to control them, the Familiars have gone feral. Though she hates to have to destroy the students' hard work she tells the Player the Familiars must be put down before they tear-up the school. Usher's concerns end up being very relevant as the Rec Center turns out to be a nest of the feral Familiars, who had begun to merge into one massive flesh golem. Dealing with the beast will prevent the outer perimeter from being torn up.

Upon returning to Ms. Usher, she will give the player more back-ground on what happened to the other staff members. Most of the staff fled as soon as Beaumont showed up and made a break for the river, trying to escape via boats kept at Innsmouth Point's boat house. Annabel reveals that she and Carter have had visions, of the Henderson farm filled with lava and disease, with both woman having taken it as sign that some supernatural malevolence with roots in the local farmlands had gotten to the escaping staff members. Montag interjects that the Henderson Farm was massive and much of his old land was bought up on the Coast. Montag further states that Archibald Henderson was a trained magus but at heart a simple farmer and speculates that while he was moderately powerful, he did not have the emotional training to prevent his magics from turning on him. With her visions given a root cause Ms. Usher will send the Player to find out what happened to her co-workers and put down whatever got to them to both avenge her friends and keep Henderson's legacy from doing any further harm. Investigating the area will reveal several animate Scarecrows - make-shift golems composed of sack-cloth, blood soaked straw and stuffed with human body-parts. In addition to the scarecrows is a Revenant - a totem creature of malice, both the revenant and the scarecrows are the result of ancient blood-rites practiced by old-man Henderson centuries prior and still tied to the land.The staff themselves are all found dead, with some of them risen as zombies, the zombies themselves are not moving far from their places of death, nor helping uncover other corpses, making them unlikely to be tools of the Draug, and instead animated due to self-imposed spells, which Montag has stated prior is a standard practice to see to it no one's body goes to waste if anyone should meet their end prematurely. Only one of the Innsmouth staff appears to have been killed by the Draug, however it is one of the massive Warmongers. Re-killing the staff's zombies and retrieving their school I.D.s for Ms. Usher will allow her fallen friends to find peace and secure Innsmouth from the left over malice of Archibald Henderson's murderous legacy. 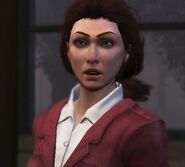 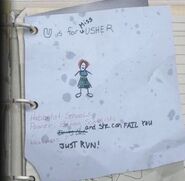 Ms. Usher as listed by the League of Monster Slayers

Ms. Usher and Carter - listening in horror to Mr. Montag's lecture.
Add a photo to this gallery
Retrieved from "https://hero.fandom.com/wiki/Annabel_Usher?oldid=1694109"
Community content is available under CC-BY-SA unless otherwise noted.