Taking down her enemies

Take out Clarence Boddicker and his gang (succeeded)

Prevent her former friend Lt. Hedgecock and her SWAT comrades (except Kaplan and the others who already disgustedly refused) from following Dick Jones' orders to destroy her partner Robocop (succeeded, the orders is abruptly ended by The Old Man)
Take out Cain and The Nuke cult (succeeded)
Help out the Resistance from Paul McDaggett and the Urban Rehabilitators (succeeded)

Anne Lewis is a member of the Detroit Police Department and is Alex Murphy/RoboCop's partner. She appears in Robocop 1, 2 and 3 and she was killed by Paul McDaggett the leader of the Rehabs and was avenged. While in the animated series she's still alive.

She is portrayed by Nancy Allen whose known for her villainous role as Chris Hargensen in the horror film "Carrie"  in the RoboCop film series and is voiced by Susan Roman in the animated series.

Lewis was first shown entering the police station bringing a suspect, who then manages to break loose and Lewis beats him up. Wareen Reed introduce her to Alex Murphy her partner as soon she finished beating the suspect.

Lewis becomes Robocop's partner after Clarence is captured and sent to prison. However Lt. Hedgecock the SWAT leader who Robocop helped him rescued Mayor Gibson from Ron Miller earlier betrays Detroit Police and taken control of the SWAT to follow Dick Jones' orders to destroy her partner. She receives a call from Kaplan, Jerry, Ramirez and Manson that Lt. Hedgecock is trying to kill RoboCop and immediately boards on her police cruiser to find him and arrives at the OCP parking complex level 3 finding him severely damaged. Shocked at what Lt. Hedgecock and the SWAT has done to him, Lewis emerges out of her cruiser and helps him board on her cruiser. During that time Lt. Hedgecock sees her saving him, ordering his team to open at her causing Lewis to realizes that her former comrade Lt. Hedgecock is a traitor and immediately boards on her cruiser and flees the scene as the team open fire at her.

During the police strike Lewis returns to the police station and furiously, disowns and kills Hedgecock for his treachery and following Dick Jones' orders to destroy Robocop. She finds Robocop's equipment and goes to the steel mill. After giving Robocop his equipments and being ordered by him to be alone, she wondered, who was responsible for giving the orders to destroy her partner. While staying in the steel mill, Clarence and his gang arrived having released by Dick Jones who learned that Robocop was rescued to finish Robocop and they kill the gang one by one resulting the destruction of Boddicker's gang. She's injured in the shootout, while Robocop finally kills Clarence using his Data Spike installed on his fist, putting the crime lord's threat to an end and she was then rescued by Medical team led by Wareen Reed and Whitakker the new SWAT leader and also later learned it was Dick Jones who made Hedgecock to attempt to destroy Robocop and releasing Clarence and his gang from jail and is fired by The Old Man for murdering Bob Morton allowing Robocop to finally kill him and putting the orders to destroy Robocop on the Detriot Police to an end.

Lewis is again seen serving as Robocop's partner, she and Robocop are the only officers who are not on strike until they help him raid the Nuke factory led by Cain, after Robocop was torn apart by him. She also helps Robocop deal Robocop 2 until he smashes Cain's brain. 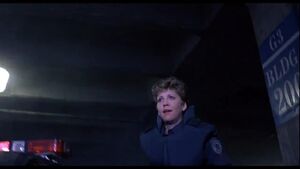 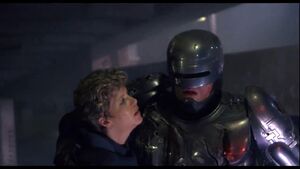 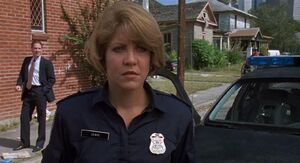 Anne Lewis as she appears in Robocop 2 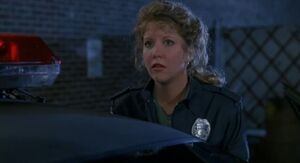 Anne Lewis as she appears in Robocop 3 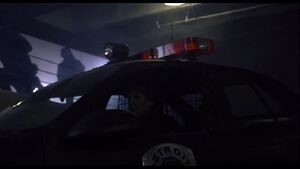 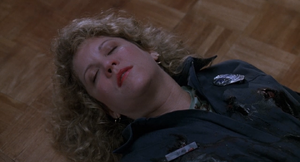 Anne Lewis dies after being shot by Paul McDaggett.
Add a photo to this gallery
Retrieved from "https://hero.fandom.com/wiki/Anne_Lewis?oldid=1841473"
Community content is available under CC-BY-SA unless otherwise noted.