Anne Marie is the tritagonist from the 1989 film All Dogs Go To Heaven. She's a young orphan girl with the ability to communicate with animals.

Anne Marie was voiced by the late Judith Barsi in her final role and sung by Lana Beeson.

Background It is unknown how she became an orphan, but she was probably kidnapped from an orphanage by Carface. Somehow, she had the ability to speak with all kinds of animals.

She's an innocent, kind, loving, gentle, fun-loving, and sweet little girl who dreams of being adopted to goodly parents. She also gets upset when Charlie did bad things like stealing, gambling, and fibbing.

When Carface tells Killer to feed the girl and leaves without another word, she reminded Carface that he said she can go outside only to be responded by the closing of the door leaving her all alone.

She was surprised and frightened at first when Charlie and Itchy came into the basement, but she became happy when they helped her get out of the basement and they spent the night at the junkyard.

She prays, believing that God sent Charlie and Itchy to save her for gratitude and helping to find her new parents. The next day, she was taken to the horse stables to ask one of the horses who will win the race.

At first, she refuses by saying that Charlie is just like "Mr. Carface" because he keeps asking her to ask the horse, but when Charlie said that they would use the money to help the poor like Robin Hood in the bedtime story.

She gets excited and asks the girl horse about who will win which turns out to be a horse called the Grand Chaw-Hee.

While Charlie picks some pockets, Anne Marie saw a couple, Harold and Kate who she thinks that they'll make perfect parents for her. Soon, they went to the race in disguise and watches as the Grand Chaw-Hee wins the race, because the other horses let him win for his birthday.

Then, Anne Marie wishes a happy birthday to Chaw-Hee and kisses Charlie on the cheek, much of his dismay and disgust. Anne Marie continues to talk to animals and wins bets for Charlie.

With the money they earned, Anne Marie buys lovely new dresses and Itchy builds a new casino for Charlie. When she learns that Charlie's gambling and not even looking for parents, she packs up and tells Charlie that she's leaving.

Then, Charlie stops her by saying that they're going to help the poor. Then, Anne Marie and Charlie went to see Flo and the puppies while delivering pizza and cake to them.

She spotted the wallet on the ground with the wedding picture of the couple she saw before and realized that Charlie had stolen it. She was upset about it, but later before she heads to bed, she sang a song about them, adopting her.

In the morning, she went to 402 Maple St. to return the wallet to Harold and Kate who offered her breakfast and when they learned that she's an orphan, they talked privately about adopting her.

While the couple's away, Charlie comes to get her. As they walked through the marketplace, Carface and his minions shot Charlie with a ray gun to Anne Marie's horror.

But Charlie survives due to his watch which protected him from harm and runs with Anne Marie riding on his back. Then, they hid in an old storage, but soon the floor broke and they fell into the sewer.

Then, they got captured by the strange rats and were about to be fed to King Gator, but luckily Charlie's howling smooths King Gator's heart because of his love for music.

As King Gator sings and gives Charlie and Anne Marie a ride, she started coughing and says that she doesn't feel good. Then, Charlie took her to Flo's house where Flo said that Anne Marie may be catching pneumonia and that she needs a doctor.

Anne Marie was soon seen walking slowly down the stairs and overhears Charlie telling Itchy that he was pretending to be her friend to use her for business and that when they're done with her, they'll dump her to the orphanage.

Then, Anne Marie was hurt by his words, calls Charlie a bad dog, and runs away heartbroken, but then she was kidnapped by Carface, she screams alerting Charlie and Itchy to Carface's presence and is put in a cage.

Charlie comes to her rescue and fights with Carface. Later, King Gator soon came to Charlie's aid by setting him free and wrecking the ship which causes the cage Annie Marie was in to fall into the water.

Then, Charlie saves her from drowning by putting her on a piece of wood and pushing her through a hole in the hull. Killer pushes the wood she was on to shore where she was taken by an ambulance.

She was adopted by Harold and Kate and was taken to her new home to recover. Later, she woke up and saw Charlie next to her, saying good-bye to her and asking her to take care of Itchy.

When she asks if she'll ever see him again, he responded that good-byes don't last forever. She said her one last good-bye to Charlie and fell back to sleep. 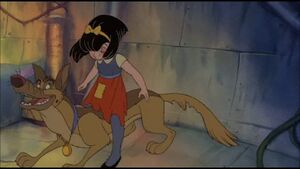 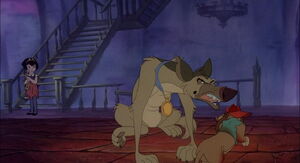 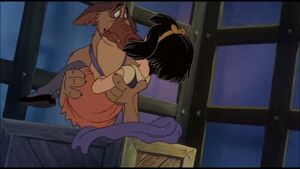