Annette Birkin was a scientist and wife of Umbrella Corporation Chief Scientist William Birkin, and the mother of his child - Sherry Birkin. Annette appeared in Resident Evil: The Darkside Chronicles, where she, as opposed to her representation in Resident Evil 2, bears a strong obligation in stopping her mutated husband.

She was voiced by Jennifer Dale, Deborah Sale Butler in Resident Evil: The Darkside Chronicles, Karen Strassman in Resident Evil 2 remake, and Marika Hayashi in the Japanese dub of the remake and Resistance. Dale also voiced Mystique in X-Men: The Animated Series and X-Men: Mutant Academy, as Strassman also voiced Poison in Street Fighter V and Catty Noir in Monster High in English, and by Marika Hayashi in Japanese.

In Resident Evil 2, Annette was a paranoid woman who was obsessed with her husband's research. She protected the G-virus from being stolen by anyone who dared trying to steal it, like Ada. She did come to the realization that she was being a less caring mother to Sherry when she learned that the embryos were soon to hatch inside Sherry's body. She helped Claire to create the vaccine, before she died.

In The Darkside Chronicles however, Annette's personality and motives were altered significantly. Rather than being a paranoid wife obsessed with protecting her husband's research, to the point of choosing that over Sherry's life when she was infected by William, Annette was portrayed as a very sympathetic and tragic character in that while she allowed her and William's research to take priority over Sherry's welfare, she nevertheless loved her daughter deeply and upon being told of Sherry's condition, readily dropped her task to go help Leon and Claire cure her, and then took it upon herself to personally stop the mutated William; even at the cost of her own life.

Annette has blonde hair in a shoulder bob style with fringes in each sides. In her in-game in Resident Evil 2 her hair appears to be dark blonde.

Her only primary appearance is a white lab coat with an Umbrella ID pin at the left side of her coat, underneath is a black short sleeved shirt, black pants with a belt and a pair of matching flats.

Until Resident Evil: The Darkside Chronicles during the reimagined "Memories of a Lost City", Annette is depicted to have a shoulder length light blonde hair and blue eyes during cutscenes but in her in-game her hair is brown.

Annette in The Darkside Chronicles. 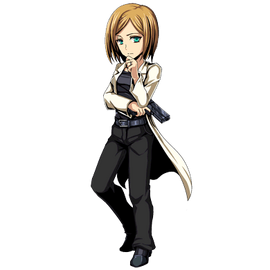