Anne Marie "Annie" Brackett is a character featured in the original 1978 slasher film Halloween, where she was played by actress Nancy Loomis.

The character also appeared in the Rob Zombie's 2007 remake of Halloween and its 2009 sequel, Halloween II, this time played by Danielle Harris, who also portrayed Jamie Lloyd in Halloween 4: The Return of Michael Myers and Halloween 5: The Revenge of Michael Myers.

In both versions of the film, Annie Brackett is the daughter of the sheriff of Haddonfield, Illinois, close friend of Laurie Strode and Lynda van der Klok, and one of the victims of serial killer Michael Myers. In the remake timeline, however, Annie survived the incident of the first film, but is killed by Myers in the sequel, Halloween II (2009).

Annie Brackett was a seventeen-year-old high school student who attended Haddonfield High School in the year 1978. She was dating a boy named Paul and was close friends with fellow students Laurie Strode and Lynda Van Der Klok.

Annie's father was Leigh Brackett, the sheriff of Haddonfield. On October 30, Annie and her friends were walking home from school when Laurie noticed a disturbing individual staring at them from further down the block.

Annie went to investigate, but discovered nothing. She joked with the shy and bookish Laurie that she managed to "scare off another one".

Later, she took Annie out driving around town smoking marijuana. Then, they stopped at Nichol's Hardware Store where her father had been investigating a recent break-in.

Sheriff Brackett told her that he believed kids were responsible for the break-in and Annie retorted by accusing him of blaming everything on kids.

On Halloween night, Annie was hired to babysit Lindsey Wallace. The Wallace house was located directly across the street from the Doyle house where Laurie was babysitting Tommy Doyle.

While making popcorn, Annie spilled hot butter on herself and had to change her clothes. She grabbed a shirt from the Wallaces and went to an outdoor laundry cottage to clean her clothes.

Little did she realize that she was being stalked by the "Shape", the same mysterious individual whom Laurie spied on the previous day.

While washing her clothes, she received a telephone call from her boyfriend Paul who wanted her to pick him up so they could go out.

Annie tried to leave the laundry room, but thanks to the Shape, the door was locked shut. She tried to climb out the window, but wound up stuck. She shouted for Lindsey who came out and unlocked the laundry room door.

Having little interest in taking care of Lindsey, Annie brought her over to the Doyle house and asked Laurie to watch over her so she could go out with Paul.

Laurie reluctantly agreed and Annie went back to the Wallace house to fetch her car. Entering the vehicle, she noticed that all of the windows were fogged up.

Suddenly, the Shape (Michael Myers) appeared in the back seat behind her and began strangling her. After choking her nearly to death, the Shape finished her off by slicing her throat with a knife.

He brought her body back into the Wallace house and up the stairs into the master bedroom.

He laid her out on in front of the stolen graveyard headstone of his own late sister, Judith Myers. Laurie discovered Annie's body a short time later while fleeing from Michael Myers.

Her body was discovered by Deputy Gary Hunt who had the misfortune of telling her father the grim news about his daughter.

As her body was being wheeled on a stretcher out of the house, Sheriff Brackett made a positive ID on her. Annie Brackett's funeral was held on November 5, 1978.

Annie Brackett was a teenage girl who attended Haddonfield High School and the daughter of town sheriff Lee Brackett. She was close friends with Laurie Strode and Lynda Van Der Klok.

On the afternoon of Halloween, Annie was tasked with babysitting young Lindsey Wallace, but preferred to spend the evening with her boyfriend Paul.

At school, Annie asked Laurie if she would not mind if Annie dropped Lindsey off with her. As it was, Laurie was already babysitting a boy named Tommy Doyle, but she agreed to help Annie out.

Walking home from school, the three girls noticed a strange-looking man peering at them from across the street. Lynda and Annie shouted at the man and Annie made a point of mentioning that her father was the sheriff.

The man disappeared moments later, and Annie put the incident out of her head. As they continued walking, Annie saw her father and got a ride home with him.

That night, Annie picked Laurie up from her house and dropped her off at the Doyle residence. She then went to the nearby Wallace house where she spent a brief amount of time watching over Lindsey.

As the evening wore on, she told Lindsey to grab her coat because she was walking her over to Tommy's house.

Lindsey had no interest in seeing Tommy Doyle and gave Annie quite a deal of frustration. Ultimately, the younger child relented and Annie walked her there.

She returned to the Wallace house after meeting up with Paul. The two were beginning to have sex and Annie was shirtless when attacked by Michael Myers, the man Annie had spotted earlier, who appeared in the room (he had broken into the house earlier and followed Annie as she went out and back), then lifted Paul off his feet and stabbed him in the chest.

He managed to stop Annie from running out of the house. Annie tried to fight back and succeeded in kicking Michael in the midsection, but this only provided a temporary reprieve.

Although she was able to grab a knife, Michael beat her down and seized her, brutally torturing Annie and leaving her a bloody mess on the floor. When Laurie came over to the house, she saw Annie barely conscious lying in the foyer. Later, Sheriff Brackett arrived and found his daughter.

Annie was taken to Haddonfield General Hospital and eventually healed from the attack. The brutality of Michael Myers left lasting scars however, both physical and emotional. With time and therapy, Annie was able to make a full recovery.

Laurie Strode however, suffered an even greater loss. In addition to being brutalized by Michael Myers, Laurie also had to come to terms with the fact that Myers had murdered both of her adoptive parents.

As such, Laurie later came to live with the Bracketts at their home on 15 Cherrywood Road.

Having shared such similar tragedies, Annie and Laurie grew very close to one another, but over the span of the next two years, their friendship grew into one of intense hardship.

Laurie blamed herself for what happened to Annie and the guilt she felt every time she had to look at the scars on Annie's face only served as a vehicle for the gnawing rage growing within her.

By 2009, their friendship continued to erode as Laurie's psychosis only drove her deeper into a life of alcohol and self-hatred. During one particular episode, Laurie exploded at Annie who in turn voiced her dislike of the "New Laurie".

By the time Halloween rolled around, Sheriff Brackett assigned a deputy named Andy Neale to maintain a post at his house to keep an eye on Annie.

Neale hated being charged with such a task and complained that the last time he had been assigned to look after Annie, she had kicked him in the groin.

Annie wouldn't let Neale inside the house and told him to turn off the lights on his squad car. Neale tried to play the tough guy, but knew that he could never win an argument with "the boss's daughter".

As it happened, Michael Myers had resumed his search for Laurie Strode and was cutting his way through anyone who had the misfortune of crossing him. He strangled Deputy Neale and broke into the Brackett house to kill Annie.

He cornered her in the upstairs bathroom and brutalized her, smashing her repeatedly into the walls. He left her battered body bleeding on the floor and left. Moments later, Laurie returned home with her friend Mya Rockwell.

They discovered Annie on the floor and Laurie had Mya call 911. Laurie sobbed, cradling Annie in her arms until she finally died. 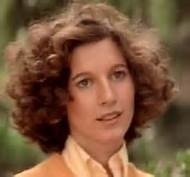 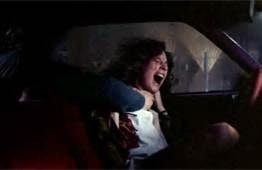 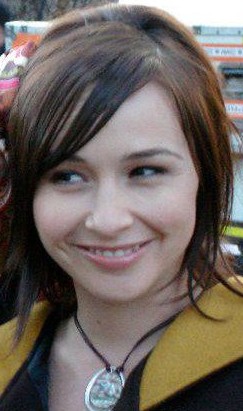 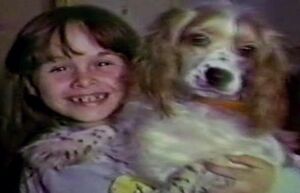 Annie back when she had her dog 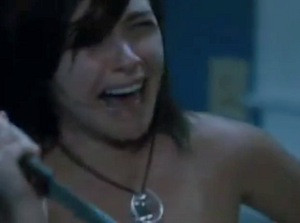 After trying to fight for her life with her shirt off, Annie is taken to be tortured 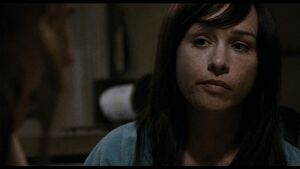