To reunite her parents.

Annie James is one of the protagonists of the 1998 remake, The Parent Trap. She is the proper twin sister of Hallie Parker and one of the daughters of Nick Parker and Elizabeth James. She lives with the latter in London England.

Annie and Hallie are very similar in personality. The two are both mischievous and intelligent, devising many schemes to torture their father's fiancée, Meredith Blake, during their camping trip. The two also share similar interests, such as their love for poker and Oreos with peanut butter. They also are both allergic to strawberries.

However, Annie still has distinct differences from Hallie. She is more proper and mature than the latter. She is patient and seems to be bilingual or multilingual, as she spoke French when she was angered at her father's decision to marry Meredith.

She is a very polite, anxious person and tends to worry more than Hallie. Annie is also more serious and can be very intelligent and shrewd, as shown when she understood Meredith's true intentions for marrying her father, which were for his money rather than him as a person. She is not shy as well when did not seem embarrassed about jumping into a lake naked, even after Hallie stole her clothes. Annie also has a smaller appetite compared to her sister Hallie, as she only had a bite of toast for breakfast. 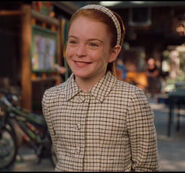