Return home to her father (main, succeeded).
Bring Eren Yeager and the Coordinate to Marley (failed).
Destroy all the Eldians within the Walls (all failed).
Stay isolated in her crystal tomb to avoid being apprehended (succeeded).
Help save the world from the rumbling (succeeded).

Annie Leonhart, also known as the Female Titan, is a major antagonist turned supporting protagonist in the anime/manga series Attack on Titan. After her identity is exposed and becomes frozen for four years, she wakes up to save her father from Eren Yeager who is bent on reducing the world other than Paradis Island to rubble. Annie is a 14-meter tall Titan with a previously unheard of feminine body structure, encountered during the expedition to Wall Maria. She possesses intelligence, extensive knowledge of hand-to-hand combat, and the ability to selectively regenerate or harden parts of her body during battle.

She is voiced by Yū Shimamura in Japanese and Lauren Landa in English.

Annie has a small yet well-built stature and has naturally blonde hair that ends near her eyes. Annie's eyes are blue and she usually has a stoic face and rarely smiles, she wears the same uniform as everyone else.

In Annie's Titan form, she is noticeably different but still keeping her redeeming qualities. Annie Still retains her blond hair with blue eyes and stands at a very tall height, unlike other Titans Annie doesn't retain much of her skin and is down to revealing muscle tissue with a little skin around her midriff. Lastly Annie has a very well endowed muscular body with her biceps and triceps along with her thighs being bulky

Annie is considered to be an isolated, glamorous, and exclusionary type; friendships do not come to her easily. She is rarely seen smiling and often has an emotionless expression. She is lazy, indolent, unresponsive, apathetic, callous, lethargic, dispassionate, quiescent, wimpy, and somnolent, with little desire to put in any effort into meaningless disciplines or activities, and instead focuses exclusively on making it into the Military Police Brigade to obtain an easy life. Yet, she somehow does seem to hold a strange fascination and even feelings of respect towards people that have a deep sense of duty and righteousness - in those people who do care and who can devote their lives and even die for causes they believe in.

Annie is genuinely selfish, due to having been abandoned at birth and being used as a tool by everyone she has ever known, even by her father who wanted a better life for himself through her. She has no interest in protecting strangers due to being unattached to most of humanity to an absurdly high degree. Unlike Reiner and Bertholdt, Annie can become sadistic in her Titan form, as shown when she catches a scout by his ODM gear wires and waits until he begs for mercy before spinning into the air.

While other Warriors have grand goals of improving life for their people or protecting the world, Annie only cares about seeing her father. She believes everyone in the world is rotten, which is why she only pursues small-scale goals, as they solely gratify her immediate desires. Perhaps her admiration for people devoted to a cause than themselves stems from a knowledge that her small goals will not fulfill her, unlike the feelings drawn from pursuing justice, morality or nearly unattainable dreams.

Annie was born as an half Eldian by her Eldian father which cause her to be abandoned by her mother. She is adopted by Mr. Leonhart and was taught all the martial arts to her in hopes of her to join the Warriors in order to enrich himself. Her father's merciless training caused her to be apathic to life for anyone and herself, it is shown when she stomped the grasshopper without any remorse. One day, fed up with all her abusive treatments given by her father, she brutally crippled him in a vicious sparring match. Her father, instead of being angry at her, praised Annie for having grown and become so much stronger. Having been genuinely praised from her father for the first time, Annie's hatred of him subsided and the relation between them became much more amicable. Eventually she is chosen to inherit the Female Titan.

In 845, she is chosen to partake the Paradis Island Operation to seize 'the coordinate'. One day before leaving for the operation, her father apologized to her for years of harsh upbringing he gave her, that his intention had been wrong. Mr. Leonhart states to Annie that even if the whole world would curse and hate her for who she is and what she does, He pleads to Annie that he will always side with her and he asked Annie to come back to him alive no matter what. She is surprised and changed her in the process. During the operation, she along with Reiner and Bertholdt ran away from Ymir Titan after Marcel death. She blame Reiner for the situation and suggest leave the island, but Reiner insist to continue the mission. This anger Annie that she beat up Reiner, she soon strangled by Reiner and he will be Marcel. She reluctantly continue the operation.

After Eren Yeager managed to acquire access to Ymir Fritz's power and convincing her to side with him, Eren triggered Rumbling that caused all Titans within the Walls in the Paradis to awaken and undo the Walls. Titans that had been imprisoned within the Walls number possibly in the hundreds of thousands proceeds to advance towards the rest of the world, intending on flattening them. Eren activation of Rumbling also undid Annie's crystal tomb, allowing her to finally be freed from her self-imposed internment. it is also revealed that although she was inside the crystal and could not talk to those outside the crystal, she could still hear them and was therefore not completely blind of events that occurred while Annie was dormant.

Hearing Eren's intention that is directly linked to the safety of her father, Annie resolves to stop Eren by joining the shaky alliance between Marleyan military remnants and Survey Corps rebels. 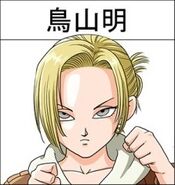 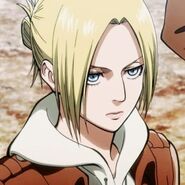