Anna Clare "Annie" Sawyer is a ghost and the protagonist of the UK series, Being Human.

Annie Sawyer is an insecure ghost haunting the house she lived in with her fiancé Owen whilst she was alive. One day, Owen found a thong and accused Annie of cheating on him which resulted in Owen pushing Annie downstairs, killing her. Annie then remained in the house (as she couldn't enter the afterlife because of unfinished business) and then after a long period of being alone, she is joined by George Sands (a werewolf) and John Mitchell (a vampire), who are able to see her because of their own supernatural conditions. The extent of Annie's visibility to humans varies depending on her mood and her confidence. Though the first series, Annie couldn't remember Owen's involvement in her death, but when finding the thong, the memory returned to her.

She attempted to get revenge on Owen by haunting him, but this failed. She eventually got her revenge when she, Mitchell and George confronted him. Annie revealed what Mitchell and George were before whispering something to Owen, which causes him to flee the house and turn himself into the police, who transport him to an asylum when he mentions about Annie being a ghost and Mitchell and George being a vampire and werewolf.

She always appears in the clothes she was wearing when she died, which change subtly depending on her state of mind. Annie's life as a ghost has involved her coming to terms with her own death, avoiding death's door and being trapped in purgatory, in addition to several doomed attempts at romance. After losing Mitchell, the love of her life, and friends George and Nina, Annie becomes a mother figure to Eve (George and Nina's daughter) and new werewolf and vampire housemates, Tom and Hal. Annie later crosses over to be reunited with her old friends, having made a difficult decision which averted a dark future for mankind, saving the world from the Old Ones. 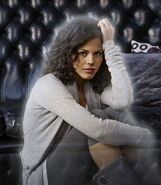 Add a photo to this gallery
Retrieved from "https://hero.fandom.com/wiki/Annie_Sawyer?oldid=1798532"
Community content is available under CC-BY-SA unless otherwise noted.