Hanging out with Mikado and Masaomi

Use Saika's power for good

Anri Sonohara is a major character in the light novel and anime series Durarara!!.

She is a bespectacled girl who attends the same school as Mikado Ryūgamine and Masaomi Kida.

She is a rather quiet and timid girl, but appears very close towards Masaomi and Mikado. Although possessing a tendency to seclude herself from others, she is intelligent, kind and resourceful. Her full figure and shy behaviour gives her the unwanted attention of many males (though she doesn't do anything about them). Her online chat screen name is "Saika".

Anri has glasses, black hair, wears a Raira High School Uniform & she uses her samurai katana as her weapon. She becomes a Saika while she was slashing her sword.

Appearance-wise, Anri is known for her cute short, bob-cut hair, glasses and her rather large breasts. She is usually seen wearing her Raira uniform, but is shown wearing a black vest with a pink dress underneath outside of school.

Initially, Anri is a very introverted and quiet girl, rarely speaking to anyone for any extended period of time, only becoming friends with Mikado and Masaomi due to her and the former being class representatives. She is shown to be rather submissive and tends to "go with the flow" even when someone is harassing her. This timid demeanour stems primarily from the trauma she received when her parents died, which also made her believe that she was unable to love anybody.

As the series progresses, Anri retains her shy personality, though her interactions with Mikado and Masaomi serve to pull her out of her emotional shell and she becomes much more expressive and shows a caring side to those close to her. Although Anri tends to let things slide, there have been moments where she has been shown to lash out at people such as when Izaya was taunting her about Saika in episode 24, or when someone threatens her friends.

Since Anri locked away all her emotions after her parents' death (specifically love), Saika merely balances out the emotions she has locked away which is how she is able to keep the spirit of the sword from going berserk. However, due to her time spent with Mikado, her emotions are beginning to reawaken and as a result, gives Saika more power. Anri is afraid that if she allows herself to fall in love with Mikado, it will give Saika enough power to take full control and cause her to hurt him. This fear appears to be well founded as Anri seems to have more and more trouble keeping Saika in check as the novels progress.

It is revealed in the episode 17, that Anri and her mother Sayaka lived with an abusive father (although it is implied that he wasn't always a cruel man) who regularly beat his wife and daughter severely.

One day, when her father started to began very angry and violent, Sayaka used her daughter to kill her husband before he could kill Anri, possibly starting to lose control, she tells to her only daughter that she loved her before slitting her own throat with the blade, this incident was covered up and it was spread that a burglar killed Anri's parents, and that she was the only survivor.

Most of Anri's life between the day of her parents' death and the start of the series is a mystery, although it can be assumed she led a relatively normal life.

During middle school, Anri befriended a girl named Mika Harima, although they appeared to be close, it was clear to both of them that they were merely using each other for different purposes, Mika used Anri as a way to make herself look better while Anri relied on Mika to keep bullies away, eventually, Mika and Anri ran into a group of thugs who were promptly chased away by Seiji Yagiri which is the event that caused Mika to become infatuated with him.

Anri starts attending high school at Raira academy. When she introduces herself in class she looks around and stares at Mika Harima's empty seat, wondering where she was. The next day Anri volunteers to be class representative and asks if any boys wanted to volunteer to be the male class rep and unintentionally begins to stare at Mika's seat again. However, as Mikado sits directly in front of her, he takes it as a hint that she wants him to volunteer, which he does.

Later, she asks Seiji where Mika was but he doesn't know. She then walks around and she sees a girl that looks like Mika. She runs up to her but realizes it wasn't Mika so Anri apologizes and runs away.

Later she gets pulled in an alley by some bullies and gangsters. They begin insulting her about how she keeps clinging to people. Luckily Izaya comes in with Mikado and scares the bullies away. After talking with Izaya, Shizuo suddenly appears and attacks him. She starts to shake so Mikado takes her hand and runs away with her. The next day she walks with Masaomi and Mikado to the park where they eat ice cream. She tells them about her friend called Mika Harima that went missing.

She explains Mika's eccentricities, going so far as to call her a stalker. She also brings up how they were both using each other to make themselves feel better. The next day she walked with Mikado out of school, but Mikado went on ahead because Celty and Izaya were following him. Then next day Masaomi hits on her and Mikado stops him.

Anri notices her teacher, Takeshi Nasujima, being chased by Celty. She protects Takashi from her by stabbing her arm and knocking off her helmet and runs away. Due to the darkness of the alleyway, neither Celty nor Takeshi realize who Anri was.

The next day, she gets approached by Takashi who then starts sexually harassing her. Luckily, Masaomi comes in to stop him, mentioning Haruna Niekawa to cause him to leave. Later she walks with Masaomi and Mikado with Masaomi explaining why Haruna's name caused Takeshi to back off. The rumor being that Takeshi got into an affair with Haruna which caused a scandal and forced her to switch schools. When they split up, she gets pulled into an alley by her bullies. As they begin to pick on her, Anri retreats back into her emotional shell. In the light novels, she describes it as a frame room where she looks at the world as though it were inside a picture frame. As the bullies continue to taunt her, she witnesses the slasher appear behind them and attack.

She goes to the police box where Mikado picks her up and tells her to be careful. The next day Takashi harasses her again and, once again is saved by Masaomi. As she is walking home, she is attacked by a Saika-possessed Shuji Niekawa.

Suddenly Saburo runs him over with his car. When the others got out, Shuiji gets up and tries to attack again but Celty and Shizuo come in and stop him. Then Celty drives Anri home and formally introduces herself. Anri asks what was under her helmet. Celty shows her and Anri, with no fear, says Thank You and walks in her house. Then,late at night Haruna comes to visit Anri's house. Anri cautiously invites her in and appears visibly disturbed by Haruna's presence. Haruna then tells her that she is going to die for taking her Takashi.

Anri tries to tell her that she dosen't like him but Haruna doesn't believe her. Then someone knocks on the door and Haruna says whoever it is she's going to kill them. When Haruna opened the door, it was Takashi. Haruna, madly in love, chases after him but sends some of her men to kill Anri. But Anri takes care of them then goes after Haruna and Takashi. After Haruna asks how Anri escaped, Anri reveals herself as the True wielder of Saika.

After a brief fight Anri pins Haruna down and told her past. She tells her of her abusive father and how her mother used Saika to kill him when he almost killed Anri. When Anri touched the blade she heard Saika's voice speaking to her. Anri decided to keep Saika hidden within herself from that day on, locking away her emotions in the process.

Haruna refuses to believe Anri's story and attacks. Anri let's Haruna cut her a few times before defeating Haruna by cutting the back of her neck. This brings Haruna under Anri's control and knocks her out. Takashi is initially relieved until he sees Celty. Takashi tells Anri to run, but Anri reveals that she was the monster that attacked Celty the night she was chasing him. In fear, Takashi runs away. The next day she goes to the hospital as the last person to be attacked by the slasher.

Anri gets released from the hospital and notices Masaomi is acting weird. Anri tails Masaomi and sees him at the Yellow Scarves meeting. She is soon spotted and a chase ensues. She texts for Celty to help her and she arrives in time to get Anri to safety. When they tried to leave, a Yellow Scarves member threw a metal pipe at Anri so she pulls out her sword and cuts it in half.

The next day she is with Mikado and Masaomi and she feels uncomfortable around Masaomi. The next day, the Yellow Scarves, led by Horada, corner her as a way to get back at her for spying on them. They chase Anri, however she is aided in her escape by several dollars members including Shiri, Kazutano, and Ryo Takiguchi. Horada continues the chase, but a man in a bunny suit grabs her and gives her his suit as a disguise.

She takes off the bunny mask but the Yellow Scarves manage to catch up to her. Simon intervenes as Anri makes another escape. Then Masaomi grabs Anri and goes to an alley with her. Masaomi, clearly angry over Anri spying on him, accuses her of using him and Mikado for her own ends which prompts her to slap him.

As Anri removes the suit, the Yellow scarves finally surround her. She almost draws Saika when Shizuo jumps in and beat the crap out of the Yellow Scarves. Then Celty comes and brings Anri to her and Shinra's apartment saying that she needs to stay there for a little bit because the Yellow Scarves are after her.

Then the next night a shot Shizuo comes in which causes Anri to run out and save Masaomi. Then she cuts down the Yellow Scarves base door open then sees Masaomi bloody on the ground. Then Mikado comes riding on Celty's bike. As the three reunite, Kyohei and Saburo as well as many of their allies attack Horada's men, giving the others time to escape. Kyohei comes in and takes Masaomi to the hospital when he was out cold. Anri was relieved when Masaomi turned out to be alive. After Masaomi leaves the city, Anri is last seen eating lunch with Mikado, discussing how they were going to welcome Masaomi when he finally returned. Then she joins the chat as Saika. 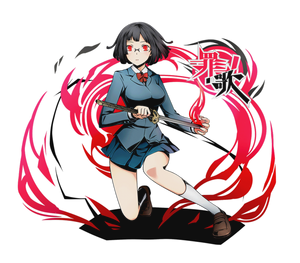 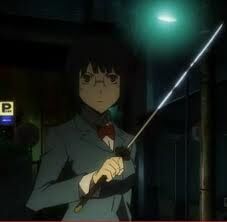 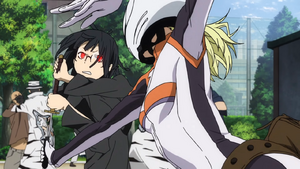 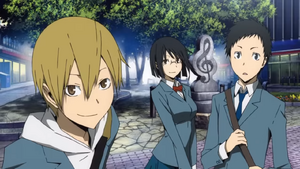 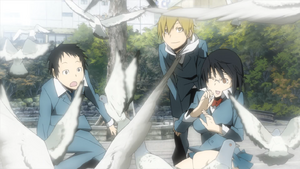 Retrieved from "https://hero.fandom.com/wiki/Anri_Sonohara?oldid=2210284"
Community content is available under CC-BY-SA unless otherwise noted.