Colonel of the Legadonia Federation, Head of the 5th Air Mage Battalion.

Spending time with his daughter, helping his country.

Destroy the Empire, and kill Tanya Degurechaff (all failed)

Antagonist Military Leader
Anson Sioux is a major antagonist hero of the light novel/anime series Youjo Senki: Saga of Tanya the Evil. He is the commander of the 5th Aerial Mage Wing of the Legadonia Federation. He was also the father of Mary Sioux. He is later promoted to the grade of Colonel after the death of his superior officer. He is the main antagonist in the first season of the anime.

Anson is first seen during his encounter with Second Lieutenant Tanya Degurechaff in her first combat mission in Norden. Anson is a loyal soldier who cares a lot for his country, comrades and family. Which is why losing half of her squadron to Tanya in their first encounter hit him really hard and the second time Tanya and her first squadron not only annihilate the majority of his wing, but also delivering a fatal blow to his country that bring their downfall. He challenges Tanya to a duel and ends up losing, but is put in a coma afterwards.

He later returns for revenge against Tanya after his previous defeat in Orse Fjord and praises to God to give him the power kill to Tanya and wipe out the Empire.

In the final battle, Anson leads his unit to fight against Tanya and her battalion. Anson takes out most of the battalion and then battles Tanya to the death.

Despite being evenly matched, Tanya ends up victorious and shoots Anson to death. But God ends up possessing his dead corpse and tries to blow himself up to take Tanya down with him, but failed.

Anson Sioux was a very loyal and religious man who was undyingly devoted to his country and people. He seems to take his job seriously as he obsessed of keeping his country safe and trying to destroy the enemy completely. Despite his serious and workaholic nature, Anson is a very loving and caring father to his only daughter Mary and he will always be there for his family during his spare time.

However, after being defeated by Tanya in the battle in Orse Fjord, Anson recovers and becomes obsessed of wanting revenge on Tanya and destroying the Empire for good. Anson believes he is God's most favourite prayer and saviour and will do whatever it takes to achieve his goals. 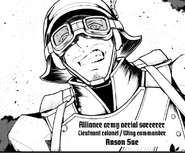 Anson in the manga.

Anson and his squadron ready to battle Tanya.

Anson after being promoted to Colonel.

An Anson's photo with his wife and daughter.

Anson saying goodbye to his daughter.

Anson seeing the Christmas present his daughter gave him.

Anson realising that his country has lost.

Anson attempting to kill Tanya to avenge Major Gunner and the rest of his fallen comrades.

Anson is defeated by Tanya.

Anson plotting his revenge on Tanya after gaining magic powers from God.

Anson pointing his gun at Tanya.

Despite being stabbed, Anson still tries to kill Tanya.

Anson is shot to death by Tanya.

Anson's lifeless body being possessed by God before exploding. 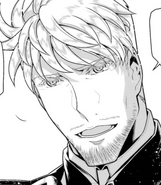 Anson in the Light Novels.

Add a photo to this gallery
Retrieved from "https://hero.fandom.com/wiki/Anson_Sioux?oldid=1906390"
Community content is available under CC-BY-SA unless otherwise noted.