Aiding the Avengers
Being with his family

Ant-Man (real name Scott Edward Harris Lang) is a fictional character and superhero who appears in Marvel comics and universe. Scott was a reformed thief who became the second Ant-Man after the original superhero, Dr. Henry "Hank" Pym, and later became a member of the Avengers, Guardians of the Galaxy, Nova Corps and Heroes for Hire.

The character was created by David Michelinie and John Byrne, and first appeared in Avengers #181 in March of 1979, and appeared as Ant-Man in Marvel Premiere #47 in April of 1979.

In the Marvel Cinematic Universe, he is portrayed by Paul Rudd in the titular film Ant-Man, its sequel Ant-Man and the Wasp, and is a major character in Captain America Civil War, and Avengers: Endgame. He will return in the third Ant-Man sequel, which is titled Ant-Man and the Wasp: Quantumania.

Scott Lang was born to Bob Lang and an unnamed mother in Coral Gables, Florida, who would pass away at an unknown time for the hero. Scott would graduate from high school and have a college certificate in electronic engineering, and would marry Peggy Rae, whom had his daughter Cassandra Eleanor Lang.

Despite his work, Scott couldn't support his family amidst repair work, and he turned to a life of crime to do so. He was arrested and sent to prison, as Peggy would divorce as he would later be released on good behavior. Unable to find a job, he was able to get into Stark International Design Department as an technician. His expertise in engineering would aid Tony Stark in installing a security system for the Avengers Mansion.

When Cassandra became fell to a serious heart condition, Scott returned to thievery after Dr. Erica Sondheim was taken away by Cross Technologies. Scott broke into Hank Pym's home and stole the Ant-Man suit, but the latter was actually watching him (donning the Yellowjacket suit), and followed him. Lang broke into Cross Technologies, and saved Dr. Sondheim and defeated CEO Darren Cross. Pym confronted Lang, who intended to return the suit, but was told to keep by Pym so that he could uphold the law.

Stark would ask Lang to keep an eye on Justin Hammer, but before he could so, he needed to aid Bruce Banner on controlling his Hulk transformations. Stark, Lang, and Dr. Sondheim created a nuclear-powered regulator to control Banner's heart rate, but had to restrain him and Sondheim using sound waves to calm him down. Ant-Man would also have to save Stark's life from his armor, helped Yellowjacket save Wasp from Dr. Pernell Solomon, and fought Taskmaster alongside the Avengers.

Ant-Man met the Fantastic Four, where they went into the micro-world, and later aid Rom and Brandy Clark fighting the Dire Wraiths. Scott would aid the Avengers into infiltrating Taskmaster's base, and visited Hank Pym while he was in prison. When the Masters of Evil took over the Avengers Mansion, he would be instrumental in helping Wasp defeat the Absorbing Man and Titania.

At the Tomorrow Expo, Scott accidently shrunk Spider-Man when the hero attempted to criminals from taking the Quark Machine. After scaring off the thieves, Ant-Man tried to un-shrink Spider-Man to no anvil, and the two then fought the Scarlet Beetle. After Stane International bought Stark's company, Lang left in respect to Stark, and created his own company. Scott would leave the company to become the leader of the Fantastic Four after Reed Richards was gone, and he and his daughter would live at the base for some time. Stark would call Lang for help after Justin Hammer stole his armors and data, giving them to Force and others. Ant-Man successfully infiltrated Transcorp and collected the data, despite having to fight automated pest-controls.

Despite joining the Heroes for Hire, Scott would continue aiding his superheroes after their battle against the physic entity Onslaught. Lang would help infiltrate the Triune Understanding (who attempted to discredit the group), and help them defeat the Triunes. He would also help the Avengers fight Kang the Conqueror, and was asked by them to become a member. Scott would however have troubles while part of the team, such as trying to gain custody for Cassie, his brief relationship with Jewel, and clashing with Jack of Hearts (but the hero would help Ant-Man save his daughter from her kidnappers, and die as a result).

Despite his death, Scott would meet Jack of Hearts, who left a warning that accidently caused an explosion of the Avengers Mansion. It was revealed however, that it was Scarlet Witch, who had became unhinged due to her magic. Cassie would become the superhero Stature after being exposed to Pym Particles, and would go back in time with the Young Avengers to stop Scarlet Witch's explosion. Despite her success, she would be killed by Doctor Doom in front of Scott's eyes, who swore vengeance on the villain.

Scott would lead the Future Foundation after Reed discovered that his powers were decaying (with the cosmic energy that gave it to him), and left with the Fantastic Four to resolve the problem. Scott was given Medusa, She-Hulk, and Darla Deering as his replacement members until they returned, which took longer than they expected. Ant-Man would soon confront Doctor Doom, and defeat him to avenge his daughter's death, and left the team after the Fantastic Four returned.

After the death of Uatu the Watcher, Ant-Man, Black Panther, The Punisher, Winter Soldier, Emma Frost, and Gamora were considered to replace Nick Fury in his role of defending Earth. When it revealed that Fury was the one who killed Uatu, Ant-Man and others attempted to stop him.

When Doctor Doom revived Cassie and brought her back to Scott, he decided to adjust to a normal life, and went to become Head of Security at Stark Industries. When Cassie went to live with her mother, Scott quitted and wanted to spend more time with his daughter (much to Peggy's chagrin). After opening Ant-Man Security Solutions, Scott would be attacked by Grizzly (who believed the hero to be Eric O'Grady). After the misunderstanding was cleared, Lang offered Grizzly a role into his new business. Ant-Man would have to fight a revived Darren Cross with the help of Grizzly's friend, the Machinesmith. It was revealed that Cross forced Dr. Sondheim to transfer Cassie's heart into his body, and Scott told the doctor to find a transplant heart for his daughter. After successfully saving his daughter, Scott decided to distant himself Cassie so that she could live a normal life.

Unable to not be with his daughter, Scott would stalk Cassie until she confronted him on it, and would resent him even more. After Cassie was forced to infiltrate Cross Technologies by Power Broker, Ant-Man formed a team of supervillains to stop Cassie from falling into Cross' hands. Though successful, the police arrived, and Scott took the blame and was later arrested. Despite Janice Lincoln (Beetle) manipulating the court to have Scott arrested, Cross came in dressed as Yellowjacket, and wanted revenge against the hero for his injuring his son. Cassie (donning as Stinger) was able to defeat Yellowjacket, and Peggy came to court, turning the tide to favor Scott. Despite his business being shut down, he gained the support and love of Peggy and Cassie, and decided to have his daughter as his partner.

When HYDRA took over the United States with the aid of alternate-version Captain America, Scott made Cassie go to France. Despite the attempt, HYDRA was able to capture Cassie, and use her as leverage to make Scott a mole. Despite being a mole, Scott redeemed himself by helping Winter Soldier get to the Cosmic Cube by shrinking him. Feeling guilt, Scott stowed away on the ship of the Guardians of the Galaxy, but was welcomed after he was caught. 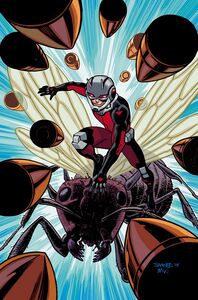 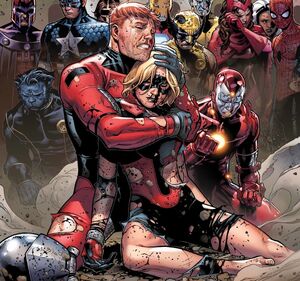 Scott mourning the loss of his daughter. 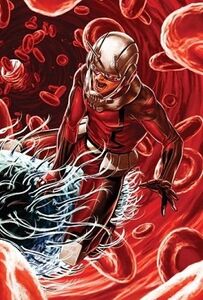 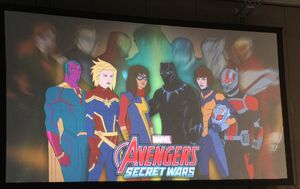 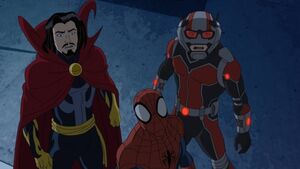 Paul Rudd as Scott Lang/Ant-Man in the Marvel Cinematic Universe. 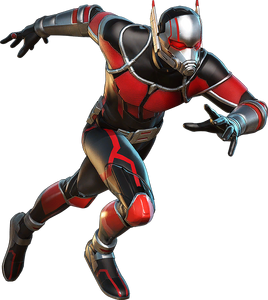 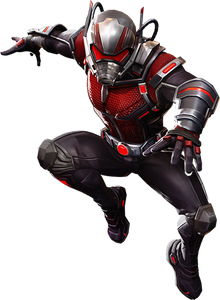