Private Anthony Carmine is a fictional character in Gears of War, and is a member of the Carmine Family, a large family that has participated in multiple wars. After the events of E-Day, Anthony joined the Coalition of Ordered Governments Army to defeat the Locust Horde, and was later killed during the Lightmass Offensive.

He was voiced by Michael Gough, who also voiced Benjamin Carmine and Clayton Carmine in the series.

Anthony was the brother of Benjamin Carmine and Clayton Carmine and a Gear soldier in the Coalition of Ordered Governments army. He died fourteen years after Emergence Day, during the opening phase of the Lightmass Offensive.

Anthony Carmine was born before 4 AE to unnamed parents during the last years of the Pendulum Wars, and was the brother to Clayton and a unnamed brother. Anthony later became the older brother to Benjamin, who was born in 4 AE. As a child, Anthony had nightmares about Locust Emergence Holes after the events of E-Day. Along with his brothers, he joined the Coalition of Ordered Governments Army, and after graduating from the academy, he was voted "most likely to get shot". During his time in the COG, Carmine also looked up to many war heroes of the Pendulum War, notably Marcus Fenix, who was well known for his heroics on Aspho Fields.

After Carmine and Delta Squad cleared the entrance of the House of Sovereigns, he rejoined the group in the courtyard. When Kim asked everyone for a status report, Carmine showed him his jammed rifle, which exposed his head to a Locust sniper. He was killed immediately upon showing his jammed rifle to Kim, and the squad eliminated the Locust in the area.

Delta Squad mourned the loss of Carmine, but the Carmine Family noted that his sacrifice brought great honor to them. Benjamin reminisced about his brother, and Clayton got a tattoo of Anthony. In Gears 5, Anthony's helmet was rediscovered by Kait Diaz and Marcus in the ruins near the House of Sovereigns, and Fenix lamented the loss of Anthony. Diaz then placed Anthony's helmet at the memorial wall in the Tomb of the Unknowns, honoring his sacrifice to stop the Locust. 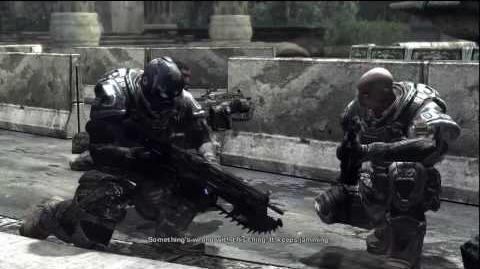 Gears of War Anthony Carmine Death Scene *HD*
What a moron
Add a photo to this gallery
Retrieved from "https://hero.fandom.com/wiki/Anthony_Carmine?oldid=1843848"
Community content is available under CC-BY-SA unless otherwise noted.