Heroes Wiki
Register
Don't have an account?
Sign In
Advertisement
in: The King of Fighters Heroes, Male, Businessmen,
and 38 more

Win the King of Fighters tournament.
Help Zarina to protect her pet, Coco.

Antonov is one of the major characters in The King of Fighters video game series.

Antonov is a mysterious billionaire who while called himself as the "first champion", he bought the right to the King of Fighters brand to host a new tournament. After the tournament, he used his wealth to buy land to help Zarina protect her pet Coco after some coercion.

Antonov successfully defended his title, but his executive director Yakov told him that the public suspected that the entire tournament was a set-up. Members of the company's board of directors broke in and condemned Antonov's failure to maintain the reputation of the tournament; the rebound caused losses in the company's stock and mass media scandals.

They will arrange an emergency meeting tomorrow. Antonov can decided to skip the night before.

Antonov fights with his Siberian Golden Fist, where he uses his brute strength with a side of strong punches, grapples, and flexing while dashing into opponents. Most of these are associate to that of professional wrestling.

Antonov appears to be an arrogant and cunning businessman, but he is in truth a respectful, brave man with a strong code of ethics and a good heart. 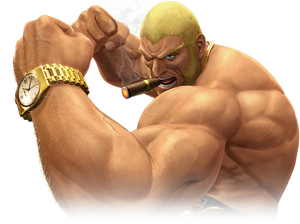 The King of Fighters XIV render. 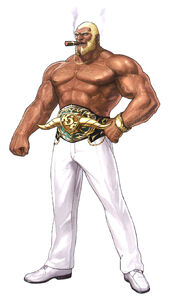 The King of Fighters XIV final concept by Ogura. 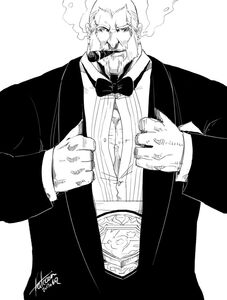