Anya Hepburn is one of the main protagonists in Soul Eater Not! and being regarded as a princess, she comes from a generally very wealthy family who also happens to be the unofficial Meister of Tsugumi Harudori. Anya is one of a few new students at the DWMA enrolling simply to see how 'commoners' or normal people act in their everyday situations. Deciding that Tsugumi Harudori is the most plan, common person she could ever meet, Anya desires to be her Meister, but ends up having to share a partnership along with Meme Tatane.

Coming from a rich background, Anya is rather stuck-up, proud, and princess-like, unwilling to make much friendly conversation with her other classmates. She often appears to be cold, unfriendly and haughty, making condescending comments about people and outwardly making fun of them. Whether it is because of her personality or upbringing, she is also very blunt and does not mince her words. She can also be rather short-tempered. However, her manner of speech is very formal, and although she can be rather stuck-up to people of her age and people who are younger than her, she is still respectful to her seniors. Because of her rich background, she is very prodigal (she sees $200 as a small amount of money and spends it all in the span of a single day) and is often not aware of how the real world works, making her rather naive in some situations. Despite this, she is very knowledgeable on various styles and brands. Her analytical skills also makes her a great observer when it comes to people, as she correctly deduces that Tsugumi copied her hairstyle off of someone else.

However, despite her rather cold outlook, Anya does truly want to make friends, but due to her upbringing, finds it rather awkward to act around other 'normal' people. She often has trouble expressing her true emotions, especially ones that might make her look soft. Deep down, she does care for her friends, and is saddened by the fact that she cannot act more openly around them, shown when she is miserable at the fact that she keeps calling Tsugumi and Meme by the formal suffix '-san' whilst Meme and Tsugumi are calling each other with the informal suffix '-chan.' The cold outlook which she uses to hide her soft-hearted side makes Anya a 'tsundere' type of character (a Japanese term for a character who is 'tsun-tsun' meaning cold, and 'dere-dere' meaning a softie). However, recently, she seems to have slowly gained the ability to be more open and friendly. She can also be very shy at some points, blushing and nearly onto the point of tears after having to wear a dress which she deems too short and accusing Tsugumi of being a pervert. It is also implied that Anya is a bit of a glutton, often thinking about food, a fact which she tries to hide. Despite her usual haughtiness, Anya proves to be more vulnerable than she lets on.

Despite her rather stuck-up behavior, Anya is not afraid of adventure, and can sometimes be seen as the boldest of the three main characters. She holds a great desire to be free from her strict lifestyle and is fascinated by how common people are like (although she tries to hide this fascination). She is also eager to experience common life. As her part-time job as a waitress, she tries to make it look like she does not want to work, yet when she does, she works with much more enthusiasm than either Tsugumi or Meme. The reason why she chooses Tsugumi as her partner is because she is, as she calls her, the 'God of Commoners.' She can also prove to be a good leader figure because of her strong sense of authority and ability to make decisions straight away.

Anya is a slim young fourteen-year-old girl, of American or possibly European heritage. She has blue eyes and long blonde hair going way beyond her shoulders, fitted with a white frilly headband. Her outfit is of a long white blazer with puffed up shoulders, with a blue line going across each sleeve. A single blue line also goes down her blazer from her left shoulder right down to the hem, where it is crossed by another blue line going across. She also has a white cross stitched on her blazer's collar, and as of Chapter 4 of the manga, she has begun wearing a Shibusen broach, that of a cross with Shinigami's mask on it. Beneath her blazer, she wears an extravagant pleated white dress which fans out a little at the knees and white leggings and white Mary Jane-style shoes with small crosses embroidered on them. She also wears cross-shaped earrings.

hen working part-time at Deathbucks Cafe, she wears its waitress uniform. She wears a small cap in the shape of Shinigami's mask, along with a dress shirt with puffy shoulders tied and black ribbons along with a large extravagant polka dot bow tie. Above that, she wears a well-fitting black dress held up with suspenders, tied with a ribbon behind her back and with cross-stitches on the front. The skirt fans out at her thighs and has a white stripe going across the bottom. She wears white knee-length stockings and black shoes. In this outfit, she also wears her hair up.

Anya is the only one as of yet who is shown to wield Tsugumi in Weapon form, and she proves to be very efficient in combat. And very competent in using a staff weapon against a Short Sword. She was able to gracefully defeat Hao when he used Reid. She also mentions that she was forced to learn "Royal Karate" back at her castle, making her a competent fighter. However, her inexperience of fighting in real fights lets her down at some points as she can get too nervous, and without a Weapon partner, she cannot fight as well. As such, she was no match for the Protoype 2 Traitor. Meme Tatane is possibly stronger than her in terms of physical combat. 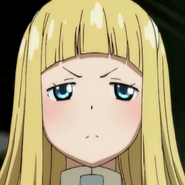 Retrieved from "https://hero.fandom.com/wiki/Anya_Hepburn?oldid=2212144"
Community content is available under CC-BY-SA unless otherwise noted.