Anya Oliwa (proper Polish spelling: Ania) is a major character in the 2014 video game Wolfenstein: The New Order and the 2017 sequel, Wolfenstein II: The New Colossus, and a supporting character in Wolfenstein: Youngblood. She is the ally and later lover of William "B.J." Blazkowicz, and becomes a freedom fighter to fight against the Nazi Party. Anya later becomes the mother of B.J.'s daughters, Jessica and Zofia Blazkowicz.

She is voiced and modeled after Alicja Bachleda.

Anya Oliwa was born on September 6, 1923 in Poland to Dr. Krzysztof and Róża, who were Polish doctors and intellectuals who worked at the mental asylum, the Zakład Psychiatryczny Maławieś. Anya showed herself to be highly intelligent at a young age, and became a student at the University of London when she was around sixteen years old. When the Blitz happened, Anya was forced to abandon her academic life, and stepped up to help her family by becoming a nurse a the mental asylum.

During this time, Anya secretly killed many Nazi soldiers, often seducing and murdering them for their atrocities. The details of her killings are in Ramona's diary, a fake name she created in case the journal was ever found, and later gave them to B.J. to read them while on his missions. Anya became a dreaded induvial under the Nazi's rule, gaining the name "The Matawies Serial Killer", but decided to leave her crusade to aid her parents at the asylum. Despite these claims, Anya does state in the last entry that most of the things that were in the journal probably happened, leaving the entries up to debate.

At the asylum, Nazi officers would often visit and take random patients in shackles, and B.J. was rescued by Anya and her family when they found him afloat in the sea (after escaping Deathshead's compound). Anya became attracted to B.J. while he was in her care, and also hoped that the Nazi's rule would be over soon during the sixteen years.

Friedrich Keller and his men arrive to the asylum, announcing to Anya's father that they intend on shutting down the facility. Anya and her parents witness the Nazi's execute patients, and Anya attempts to intervene, but is struck in the head by a Nazi. Her parents attempt to stop the massacre, but are killed themselves before Anya is taken by Keller. B.J. awakes from his cationic state and manages to rescue Anya and capture Keller in the courtyard, and has Anya drive them to her grandparents' home. Anya and her grandparents tell B.J. that the Nazis won the war sixteen years ago, and that all resistance members have either been killed or sent to prisons.

B.J. interrogates Keller down in the Oliwa's basement, and gets information from the Nazi officer that resistance fighters have been taken to Eisenwald Prison in Berlin. After killing Keller, B.J. and the Oliwa's decide to fight against the Nazis, and help him get to train that travels to Berlin. Inside their room, Anya and B.J. begin a sexual relationship, and she later distracts a guard for B.J. to sneak into the prison. Later on, Anya saves B.J. and his ally, Fergus Reid/Probst Wyatt III from Nazi forces, and Fergus/Wyatt takes them to the Monuments of Truth.

Anya and B.J. become members of the Kreisau Circle, and the former befriends its leader, Caroline Becker by revealing that she knows how to typewrite. Anya becomes responsible for radio contact, support and intercepting Nazi messages while B.J. goes on missions to stop the Nazis. During his missions, Anya studies Caroline's notes on Project Whisper, a project on experimental helicopters, and "Uber concrete", which led the resistance find Da'at Yichud member Set Roth. B.J. manages to rescue Set from Camp Belica, and leads B.J. and Fergus/Wyatt to get the spindly torque.

After B.J. returns from the Moon to the London Nautica, the Nazis assault the Kreisau's headquarters and capture Anya, Set, Bombate and other members. Anya and the group are sent to Deathshead's compound, and reunites with B.J. who assaulted the compound with the use of the spindly torque. Anya separates from him, and helps the resistance get to a Project Whisper helicopter. B.J. defeats Deathshead, but is critically injured and orders Fergus/Wyatt to destroy the compound.

Anya and the resistance find B.J. in his critical condition, and take him to the Eva's Hammer after destroying Deathshead's compound. Anya begs Set to save B.J., which he does, but Blazkowicz is left in a weak state for five months. During the five months, Anya becomes pregnant with B.J.'s twins, and continued aiding the resistance until Frau Irene Engel attacked the Eva's Hammer with the Ausmerzer. During the attack, Anya saved B.J. from a Nazi strangling him, and takes him up to the top with Set, Bombate and Max Hass. Engel captures Caroline and Fergus/Wyatt, ordering B.J. to surrender if he wants to save his friends.

Despite Anya's pleas for B.J. not to, Blazkowicz does so and later detaches the Ausmerzer from the Eva's Hammer. B.J. returns with Fergus/Wyatt, Irene's daughter, Sigrun Engel, and Caroline's decapitated corpse. Anya is saddened upon learning of Caroline's death, and attends the wake after sending B.J. into Section F to kill the Nazis who survived the resistance's attack five months prior. After getting Grace and her group onto the ship, Anya's relationship with B.J. becomes strained, as the latter believes that he will die soon due to his injuries, and won't be able to be with Anya and their children. After confronting him, Anya criticizes Sigrun on being with her mother when she committed numerous atrocities, but later relents and gives Sigrun a station to aid the group.

Once B.J. was captured by the Nazis after his mission in Roswell, Anya and the resistance planned on getting him out, but it backfired when Norman "Super Spesh" Caldwell was killed by Frau Engel. Anya realized that Caroline found a bio-engineered super soldier body, and asks Set could he place B.J.'s head onto the body via a head transplant procedure like he did for Shoshana. After collecting William's head after his execution, the group manage to successfully place his head onto the super soldier body, and B.J. regains confidence to fight against the Nazis. After B.J. learns how to use his contraption, Set states that Anya was relentless on saving B.J., going as far to get his weapons from Mesquite after he was captured.

Anya later supports the resistance by going to New Orleans to recruit Horton Boone and his group, and goes on mission with Fergus/Wyatt to B.J. support. B.J. succeeds in recruiting Horton, and the group return to the Eva's Hammer when the Ausmerzer attacks them. When Horton tells the group that they need the ODIN codes to take the Ausmerzer, Anya comes up with the plan for B.J. to go to Venus as Jules Redfield, an actor trying to get the part to play B.J. in Adolf Hitler's film. While B.J. gets the ODIN codes on Venus, Anya and the resistance decide to throw B.J. a birthday party to celebrate him turning fifty.

The next day, the group learn that Wyatt is missing or that Fergus' arm has gone missing, and B.J. succeeds in finding them. Anya and B.J. board the Ausmerzer and battle Nazis to get to the stations to place the codes, and the two get separated by super soldiers. Anya manages to get to the top and saves B.J. once again, and the group reunite with Grace, Horton, Fergus/Wyatt and Sigrun. Anya goes with B.J., Horton, Grace and Fergus/Wyatt to assault the Jimmy Carver show's station, and B.J. assassinates Frau Engel on live tv. After Grace, Horton or Wyatt kickstart the revolution, B.J. proposes to Anya with his mother's ring, and she accepts.

By the 1970s, Anya and B.J. have moved to Texas, and train their daughters in fighting against the Nazis. Anya has semi-retired from fighting, and works as an anthropologist, and has spent decades to dig mass graves across America to document the Nazi's war crimes. In spring of 1979, B.J. disappears and Anya informs Grace that she doesn't know his whereabouts, but Walker informs her that B.J. created a false identity and left. Anya and B.J.'s twins, Jess and Zofia, and Grace's daughter, Abby learn that B.J. went to Paris, and decide to go find him and steal a project whisper helicopter. By the end of the game, Anya and Grace travel to the French Resistance's headquarters, and learn from Abby that Jess and Zofia are confronting the Brandt's at the Siegturm. The group save the twins from a Horten Ho 229, and Anya reunites with B.J. and their daughters, and Grace informs them that Fourth Reich are preparing to strike. Anya and B.J. decide to have the twins and Abby lead the French Resistance, as they find allies to help them. 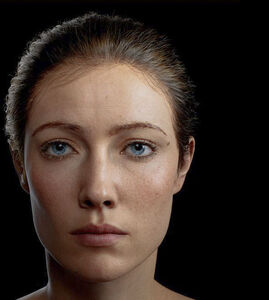 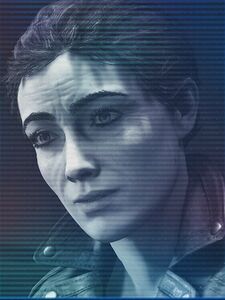 Anya and B.J. in Youngblood.