No information
Ao Fukai (フカイ・アオ Fukai Ao), or more appropriately Ao Thurston (アオ・サーストン Ao Thurston), pronounced as "aʊ", is the protagonist of Eureka Seven: AO. He is also the son of the two main characters from Eureka Seven; Renton Thurston and Eureka Thurston.

Ao is the son of Renton Thurston and Eureka.

One day, his mother fell from a clear sky into a bay in Iwato Jima, before giving birth to Ao sometime later.

After Eureka was handed over to the American Armed Forces ten years ago, as the islanders believe her and Ao's presence angered their local deity the "Sea Colossus" with the appearance of Scub Coral, Ao ended up in the care of his mother's only friend, Dr. Toshio Fukai. Ao discovers the RA272 Nirvash Mark One after he unintentionally retrieves his mother's bracelet from Gazelle who was smuggling it for the Japanese Army, and then Gazelle gets him to pilot the IFO, both named the Nirvash by Eureka and created by Renton. Ostracized by the villagers and targeted by the armies of several countries, Ao decides to join Team Pied Piper of Generation Bleu, hoping to find her.

Renton and Eureka named their son Ao Thurston. He was later renamed Ao Fukai by his guardian after his mother's disappearance.

Ao has a pale complexion and purple eyes with stained red rings that he inherited from his mother, and brown hair that he inherited from his father. From his father, Ao inherited the shape of Renton's face and eyes, and he looks almost identical to his father. Although his natural hair color is brown, it turns turquoise, like his mother's hair color, when he first awakens the Nirvash Mark I, possibly due to it mistaking Ao for his mother due to his Coralian heritage. His outfit consists of a blue hoodie with a black shirt underneath, dark half-cut pants with black knee-length stretch pants underneath, and blue shoes. As a member of Generation Bleu, he wears the standard uniform that consists of a blue and white shirt with the company's blue triangle symbol, a yellow tie, blue pants that reach his knees, and black shoes. He wears a space suit that is white and blue whenever he pilots Nirvash in battle.

It is revealed that Ao has a slightly different genetic makeup than a normal person due to being a Human-Coralian hybrid, but only that he sees things slightly in the infrared range is known, such as being able to see the movements of Trapar. This becomes a setback for him while in space because there is little to no Trapar there. The incidents in episode 11 reveal that Ao belongs to a class of people that can be influenced by trapar. This class consists of people that are born near a Scub Burst, wherein Generation Bleu concluded that their brain structure have been altered by the Scub. The exceptions to this are Ao and Elena, who were not born near a Scub Burst.[1] In episode 12, it is revealed that Ao can apparently see trapar, and calls it the "path of the wind".[2]

Ao is a brave, modest and empathetic boy who is willing to do anything to protect his friends and family. Ao seems to have inherited traits from both of his parents. Like his father, he is upfront and determined, and his unwillingness to give up; also like his father, Ao is shy around girls, but to lesser extent than Renton had been. Unlike his father, Ao is never obsessed with girls and instantly develops a good relationship with all of his crew mates. According to Eureka, Ao is just as honest as Renton is. Like his mother, he is blunt but a bit weary around certain people and suffers from identity crisis, although to less extent than Eureka did. Unlike his mother, Ao is modest and has always treats his friends nicely, especially Naru Arata and Fleur Blanc. He is very curious; despite believing his father abandoned him and his mother, Ao increasingly becomes interested in learning more about his father and the rest of his biological family, craving to know the truth about his origins.

Towards his family and friends, he tends to be very mature, caring and protective. In difficult situations, he presses others and becomes their voice of reason in order to prevent them from running away from their hardships or feeling down. Generally, when under attack or in dangerous times, he urges the others to help out in any way they can no matter how bad the odds are against them. Despite learning he is a Human-Coralian hybrid and suffered years of ostracism, Ao doesn't care about the value of his identity because, as he says, no matter who his parents are or if it is his destiny to fight Truth and the Secrets as their natural enemy, he will continue to fight for the sake of others.

During his early days with Generation Bleu, he tended to engage in combat without fully understanding the risks of battling, and he eventually starts to think about the events around him before coming up with a rational solution. He is very intelligent for his age, but always finds himself at the center of attention due to his unusual appearance. He is shown to be reckless; seen when the Nirvash's arm broke and he used it to smash the Secret. He also has a fierce temper and sometimes is quick to act out by fighting, especially against Gazelle. Ao loves his mother, Eureka, dearly and keep his memories of her from his childhood close to his heart.

Ao spent much of his life angry at his father, Renton, for allegedly abandoning him and his mother, but upon learning he had been wrong, he risked his life to save his parents without making any more mention of his past feelings for his father. After this, he develops great respect and affection for his father, happy to know that he was always loved by his father. Despite growing up without either of his parents in his life until he was 13, he turned out to be a pretty grateful kid, who was willing to repay them for giving him life and preserving it by saving his mother from her doomed fate and reuniting her with his father, despite knowing he may never see them ever again.

Eureka is Ao's mother and the heroine from Eureka Seven. Ao loved his mother so much when he was a toddler and missed her a lot when she left. When he met her past self, he was surprised to see her but was sad when he heard she was from the past and was shocked to find out she was pregnant with a little girl, leading him to realize that he had an older sister. Although the purpose of him joining the Generation Bleu was to find her, he loved her so much that he was willing to save her from her fate and have her reunited with her husband, and send them back to their world, despite knowing he might never see her again. Ao later told Truth that he did this because his mother had suffered enough hardships, which were coming to a different world to give birth to him alone and fought her own kind to protect him. He also wanted to return the happiness she had been denied with his father for a long time.

Renton is Ao's father and the hero from Eureka Seven. Ao had always appeared to have some animosity towards Renton when he was a child because he thought he was a deadbeat father who left him and Eureka. After hearing the truth from Eureka's past self and his guardian telling him that Renton was fighting for them, his hatred towards him lightened, but he still wanted to punch him when they first met. Ao later finds out that Renton, upon learning that high trapar concentrations would make it dangerous for a Human-Coralian hybrid, sent Eureka to a different world in order for Ao to be born and raised in a safe atmosphere, even if it meant risking his own life and happiness to ensure that Ao lived, but also because of the deep guilt he felt for not being able to save his late daughter. Saddened by those sacrifices his father made to keep him alive, Ao decided to save Eureka and reunite her with Renton, and sent them to their world and now loves his father. As a child, Ao looked almost identical to Renton and still bears a strong resemblance to him.

Naru is Ao's childhood friend and she is one of two people on the island who don't see Ao as an alien or monster. Although her father despises Ao and blames him for all of the island's misfortune, Naru has a strong bond with Ao, and often tries to keep him in line. Ao cares deeply for her, to the point where his crew mates (namely Fleur and Elena) tease him for being romantically interested her, although both Ao and Naru maintain they are just friends.

His concern for her grows when she is revealed to be a coral carrier, which damages her health. She later join forces with Truth to bring a new era where people can trust the Coral then people would like Ao. However, after she realizes Truth has deceived her and he was killed by the Quartz Gun, Naru is hospitalized. It is unknown what happens to her after Ao shot the Quartz Gun for third time; other than she grew up healthy and may not remember Ao.

Fleur is one of Ao's teammates and friends. Initially, Fleur saw Ao as a foolish and reckless IFO pilot, frequently critiquing him for any mistakes he made while on missions and not refer to her so casually by just calling her Fleur. Fleur starts to change her attitude towards Ao after the mission in Faisal Arabia, where they collaborated to help save the people there. During the mission there, Fleur reveals the reason she hates her father, Generation Bleu's President Christophe Blanc. They became friends after this, finding some mutual anger for her father, and she is frequently seen teasing Ao about Naru Arata.

She appears to have romantic feelings towards Ao because of the blush on her face and her deep concern for him. In the end she was sad when Ao was sacrificing his existence to save his parents from the fate that they had decided upon. At the end, Fleur was shown to have chased Ao to the Scub burst with the Alleluia's third engine activating. Her fate, however, is left unknown after Ao used the Quartz Gun for the third time; it is possible she may not remember Ao at all. At the end of episode 24 when Ao sacrifices himself, it is hinted that his last words to Fleur were something regarding about his feelings for her, however it still remains a mystery. 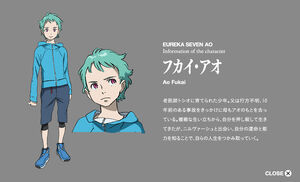 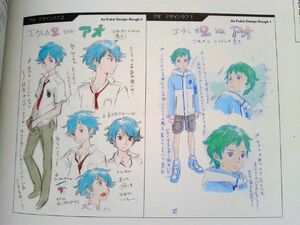 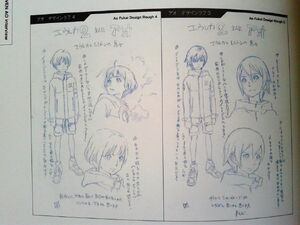 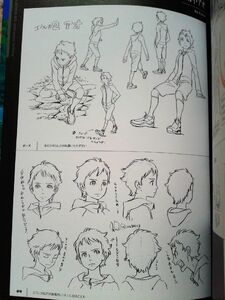 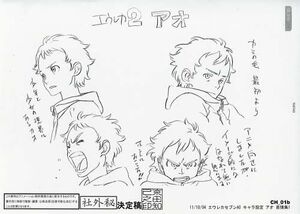 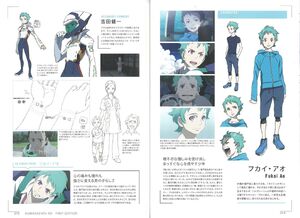 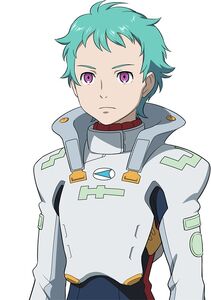 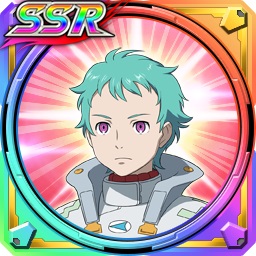 Ao wanted badly to punch his father for abandoning him and his mother.

Ao meets his father as a teenager.

Ao with his father 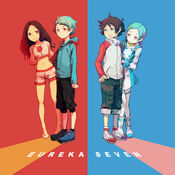 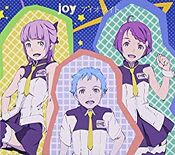 Ao and his father 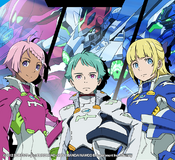 Add a photo to this gallery
Retrieved from "https://hero.fandom.com/wiki/Ao_Fukai?oldid=2003416"
Community content is available under CC-BY-SA unless otherwise noted.