Ao Haidong is one of the playable heroes from Hero of Robots. He is the pilot of the Azure, later Sacred Lord.

Ao Haidong has sometimes poor social skills. He is nerdy and lonely; because he does not fight friends.

This mysterious youth has a dragon design that extends from his face to his chest. Though he is a loner and problem student at school, he does not bully weaker kids. 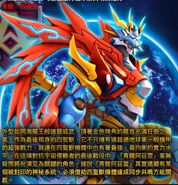 Retrieved from "https://hero.fandom.com/wiki/Ao_Haidong?oldid=1115114"
Community content is available under CC-BY-SA unless otherwise noted.