No information
Aoba Watase is the main hero of the anime, Buddy Complex. He is originally an high-school student who is one day launched 74 years into the future and finds himself in the center of a new global war. He later decides to become an official member of the Alliance Military as the pilot of the Luxon. He is voiced by Yoshitsugu Matsuoka.

He was having a normal school life with his two friends Kintero and Kinichi, until a mysterious mecha attacked. At first, it's unknown who and why he is targeting Aoba, but what is revealed is that Aoba's classmate Hina Yumihara saves him, sending them into a time vortex. Before telling him of what will happen next Hina disappears while Aoba goes into the protal to the future.

He then wakes up in the cockpit of a mecha called a Valiancer; he is inside a blue Luxon Valiancer and finds himself in midst of a battle. He does not know where he is, but the machine reported a "Nice Coupling." During the battle, the other pilot called Dio, whom Hina told Aoba about, askes Aoba to couple with him. After Aoba quickly introduces himself, the two machines couple, activating the Luxon and takes out one of the enemy machines. Their combined power forces the attackers to retreat; however, after the battle, Dio takes Aoba under gunpoint, due to being an unknown. Later, he is taken to Lieutenant Commander Lene Kleinback's office, where he is questioned about his origins; she gives a him a brief summary of what was going on in the world. Dio does not believe Aoba's explanation that he was from the past, and the latter keeps defending that he was speaking the truth. Before Dio leaves the room after being called, Aoba also talks about what Hina said, but he says he does not know who Hina was. After that, he was kept under watch with a tracker attached onto him.

Later, Corporal Mayuka Nasu gave him further background information on what has been happening in the world up to now, and he dozed off at one point, to her annoyance. After that, she showed Aoba the modified Luxon Valiancer; Dio later interrupts the two and it becomes a little heated when Aoba talks back at Dio for reprimanding Mayuka for telling Aoba about the machine. Just then, an alarm sounds, and the Alliance forces sortie against a Zogilian attack team. Aoba remained in the hangar, watching the battle. Eventually, he is requested pilot the Luxon and moves out. At one point, he duels one of the Zogilian Valiancers. Eventually, he damages the cockpit hatch and gets a visible image of who the pilot was; he sees that it was Hina. Upon seeing her again, he force decouples with Dio, which puts some strain on both him and Dio, and opens up his cockpit. He tries to establish contact with her, but she does not recognize him. More surprising, she also tries to shoot him while stating her salute to Zogilia.

After falling back, Dio reprimands him for his actions in the battle. Later, he checks on Lee Conrad, who also got himself injured trying to protect Aoba in the battlefield, and tries to apologize for his actions, but Lee was grateful towards Aoba and says that he actually saved everyone. 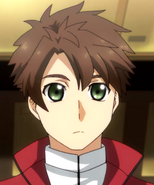 Add a photo to this gallery
Retrieved from "https://hero.fandom.com/wiki/Aoba_Watase?oldid=1879405"
Community content is available under CC-BY-SA unless otherwise noted.