Aoi Ichikawa is the main character of the fictional Nijiyome Academy Z-Cune Aoi anime. She started fighting crime in order to protect her best friend, Satomi Funabashi. The anime became popular very quickly; there’s even a movie of the anime coming out.

Her series (in the world of Akibaranger) has such a huge fanbase that Nobuo and Yumeria's interest in Super Sentai, in many cases, is overtaken by it. Her design inspired the MMZ-01 and decals of her cover the Machine Itashar. She is voiced by Shuri Toyozuki, later revealed to be an alias for Hiroyo Hakase. 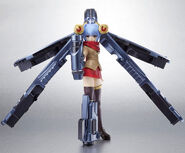 Z-Cune Aoi in the intro of Akibaranger Episode 8