Aoi Kiriya is a student at Starlight School and Ichigo's best friend. She was later put into a unit called Soleil with Ichigo Hoshimiya and Ran Shibuki.

Aoi and Ichigo have been best friends since they were young. The two first met at a festival where the latter was dancing to Guppy, an idol. She's highly knowledgeable about idols and the entertainment industry, but before that, she studied many cultural arts such as the violin, horseback riding, the piano, etc. As a result, she is often referred to as the “Idol Professor” or Aoi-sensei. After the two joined Starlight School, it was revealed that Aoi got the best score out of around 1000 people on the test about past idols for the entrance exam, having answered every question correctly. At the end of Episode 2, she became Mizuki Kanzaki's temporary manager after winning an audition against Ichigo. Her favorite brand is Futuring Girl and her stage color is blue.

Aoi has a pale complexion with cobalt eyes and wavy matching hair. Her hair is worn in a side-tail held with a light blue scrunchie. When her scrunchie is removed, her hair reaches slightly past her shoulder. As a student of Starlight School, she wears the standardized school uniform. At times Aoi may don a pair of glasses.

Aoi is a calm and bright girl. She is very intelligent, possessing an encyclopedic knowledge and excellent analytical skills. She is highly determined towards her goals and approaches them very seriously. Aoi makes sure to plan ahead and research as much as she can for a situation. She is hard-working and has a bit of a perfectionist streak.

As a child, Aoi quickly became interested in idols after discovering the freedom and excitement of it, which was a strict contrast to the traditional arts she partook in. Since then, she has dedicated herself to idols and has studied idols ever since. She appears to be quite lucky as she is seen throughout the series meeting several idols she is a fan of.

She is known for being much more mature than Ichigo and tends to keep her on the right track, but has times when she can get very excited. While normally she seems confident and in good spirits, deep down Aoi is afraid of the fact that she knows it's possible she and Ichigo won't both rise to stardom together as planned.

Aoi is first introduced in Episode 1 when Ichigo tries to ask her for tickets to Mizuki's concert for her younger brother. She then comes over to Ichigo's house and gives Raichi (Ichigo's little brother), a scrapbook to replace the pictures Ichigo had spilled juice on. She explains that through a very distant connection she was able to get tickets so that they could all go. The next day, Aoi explains to Ichigo about Starlight School and how they were going to audition together to get in the school. After Ichigo agrees, they begin their special training to get into the academy. She successfully passes the entrance exams with Ichigo, marking their start on the path to become an idol.

Aoi passes many auditions with Ichigo and Ran, and is also in the Naughty Detectives drama with Shion Kamiya. Later on, she auditioned for Tristar with Ichigo and Ran and made it to the final 3. In the end, Ran wins. Later, in Episode 37, she is put in a unit called Soleil with Ichigo. In the end of the episode, Ran had left Tristar to join Soleil with them because she was happier and more comfortable around them.

One year after Ichigo's departure to America, Aoi's new movie "Naughty Inspector" becomes popular and is a success. This leads Orihime to choose her as Starlight School representative in a constellation battle between Starlight School and Dream Academy. Her opponent is Seira, a new idol from Dream Academy. Later on, she over hears the headmistress and Johnny talking. She is shocked when she hears that the headmistress will resign if she loses to Dream Academy. It was announced that Seira would be going first.

At her debut concert, Seira performs a new special appeal that no one has ever seen before: a constellation appeal. The pressure gets to Aoi when she hears that she must perform one and that Starlight will be in trouble if she doesn't. In the following episode, Ichigo returns to Japan after a year in America. Aoi is overjoyed that her best friend has returned. As Ichigo tells the girls about her adventures, Seira and Kī sees them and talks to them. Seira points out that she wants to see Ichigo do a constellation appeal. The girls are amazed that the latter wants to do one without any thought. Aoi then announces that she wants Ichigo to be her replacement for Starlight's representative because she believes that with her Ichigo performing, there's a better chance that they'll win.

During the earlier portion of the season, Aoi would make the occasional appearances, either with Ichigo or lending a hand to the idols by teaching them something. In this time she was also doing work performing with Ichigo and Ran as their idol unit, Soleil.

Eventually, it was decided that Soleil would be going on a special tour around Japan for a 6-month tour and they embarked on the tour shortly after it was announced.

Ichigo is Aoi's best friend and co-member in Soleil. She was the one who first inspired Ichigo to become an idol. They auditioned together and became idols together. They were also roommates from the very start of their idol journey and still are now. Aoi has also given Ichigo advice relating to all aspects of idols throughout the series and alongside Kī, was one of the two producers for the unit 2wingS.

Ran is another close friend of Aoi's, as well as another one of her co-members in Soleil. When the two first met, Ran was very sharp and serious with her and Ichigo, especially with Aoi having a frequent habit of embarrassing her about some unknown facts that contrast to her image as the Beautiful blade. As the series progresses, Ran warms to Aoi supporting her through everything she does.

Kī was Aoi's partner in the Partners Cup. They both share an interest in idols together and often trade information with one another. Together, they helped Seira and Ichigo realize what was important during their competition against WM.

Kiriya - Kiri means fog and Ya means arrow. It's considered that surname Kiriya takes from Hiromu Kiriya a top star of Takarazuka Revue.

Aoi - is the Japanese name for hollyhock (written as in kanji). It also the adjective form of "ao" which means blue. 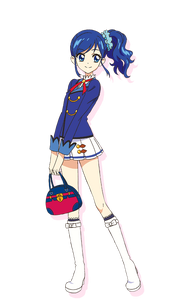 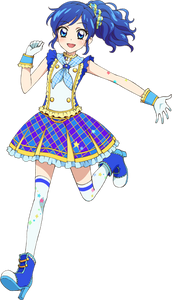 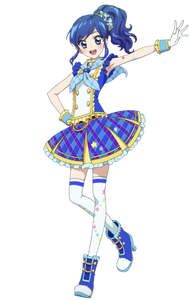 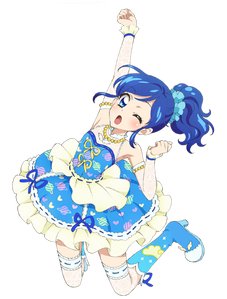 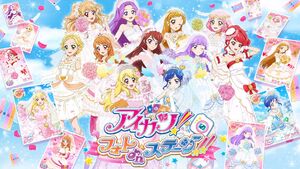 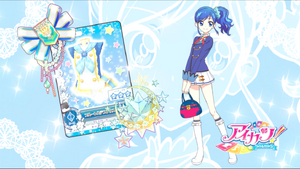 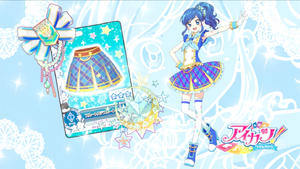 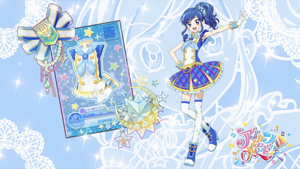 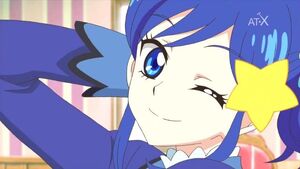 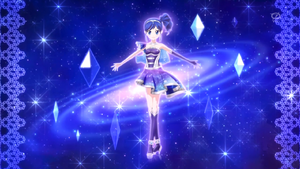 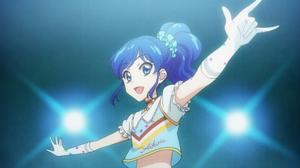 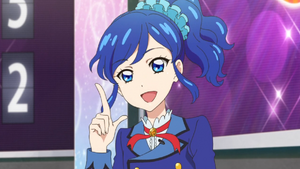 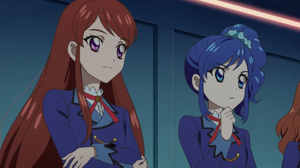 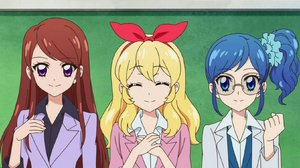 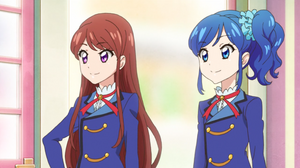 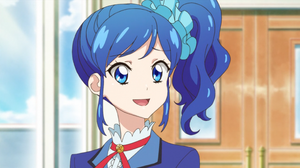 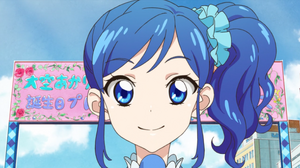 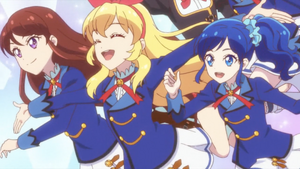 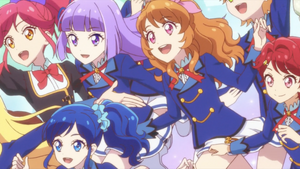 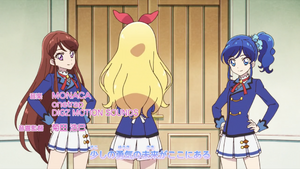 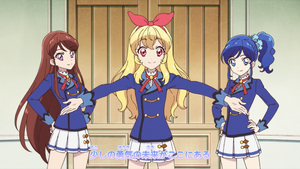 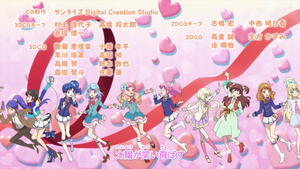 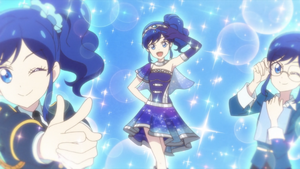 Add a photo to this gallery
Retrieved from "https://hero.fandom.com/wiki/Aoi_Kiriya?oldid=2065975"
Community content is available under CC-BY-SA unless otherwise noted.