Aoi Sakuraba is the main female character of the anime/manga series Ai Yori Aoshi. She is the daughter and heir to the Sakuraba family and the childhood friend of Kaoru Hanabishi, though when the story starts they have not seen each other for eighteen years. Aoi was engaged to marry Kaoru ever since she was a child, but due to Kaoru running away from the Hanabishi household, the engagement was called off. However, Aoi refused to accept that and pursued Kaoru, ultimately reuniting with him at the beginning of the story.

She is voiced by Ayako Kawasumi in the Japanese version of the anime, and Michelle Ruff in the English version.

Aoi is generally seen as very beautiful. She has short blue hair and blue eyes. She is usually shown wearing a kimono; specifically, an indigo one, which hides her well-endowed body. On her feet, she wears a pair of white socks and red sandals.

Aoi is a very kind, thoughtful and polite young woman, enough for it to be noted by Kaoru. She is often shown to be able to believe in people, and encourage them, such as when she told Taeko to keep making an effort to be a housekeeper despite her clumsiness, comparing it to her own situation when she was young. She has been described as a yamato nadeshiko (traditional Japanese beauty) time and time again by various characters, and every other female in the Sakuraba household aspires to be more like her, especially Tina, who describes her as a 'woman among women'.

Aoi is very devoted to Kaoru, having loved him ever since they were children, and is willing to do anything in her power to prevent being separated from him. When the Hanabishis announced that her engagement to Kaoru was called off, Aoi found this unacceptable and pursued him. It gets to the point that she can barely stand being away from him, even for just a day, and she says at one point that she couldn't imagine spending her life with any man other than him. Initially, however, Aoi did not know why Kaoru left the Hanabishi clan, and assumed that she was the reason and that he did not like her at all. After learning the truth from Kaoru as to why he left the family, Aoi expresses her deep sympathy and doesn't want him to return to the Hanabishi family due to the misery and abuse he suffered from them.

However, Aoi is also very shy and demure, to the point that she couldn't bring herself to wear a swimsuit on the beach with fear of showing so much of her body, though she eventually gains the courage to wear one in front of Kaoru. She generally refers to girls as 'Miss' and even addresses Kaoru as "Kaoru-sama", despite having loved him since the two of them were children. Overtime, she grows notably more courageous, to the point of being able to laugh out loud when she sees Kaoru in a rabbit costume. This change is noted by Miyabi, and it causes her to realise that Kaoru is a good influence on her.

Having been sheltered for much of her life, Aoi can be rather naive when it comes to the ways of the world e.g. she doesn't know what a turntable is until Tina explains it to her. She has a habit of frequently apologising, often for things that aren't even her fault or aren't worth apologising for, though this lessens considerably overtime. Ironically, she takes Kaoru apologising to her very poorly, claiming that she understands his feelings better than anyone and that there's no need for him to ever be sorry. While she does get jealous sometimes, as any woman in love does, she manages to control it and remains hopeful and optimistic that Kaoru will stay loyal to her, and her faith always pays off.

While generally quiet, subservient and consistently selfless, Aoi is far from being a doormat and is in fact a very plucky and determined young woman. Aoi will fight for the things and people she loves, even willing to defy her own family just so she can be at Kaoru's side. At one point, she even goes so far as to part ways with them just to be with Kaoru, though she regretted this shortly afterwards.

Despite her delicate appearance, Aoi is actually quite athletic and a very skilled tennis player, which she gets to show when the Sakuraba household all play tennis. Her skills greatly surprise Kaoru, who was worried that she'd end up embarrassing herself due how poorly everyone else had performed all day. Later on, Kaoru admits that, even after all this time, there's still a lot of things he doesn't know about Aoi, who states that being a skilled tennis player is only one of her secrets and, one day, she may let Kaoru know the rest, showing a surprisingly playful side to her personality. 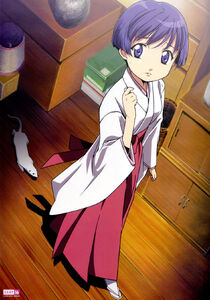 Aoi as a child 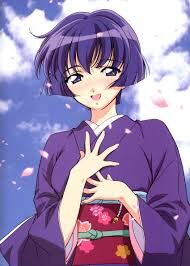 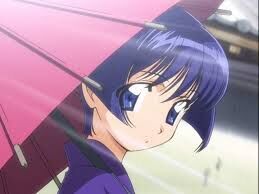 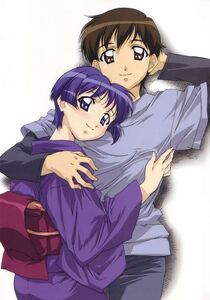 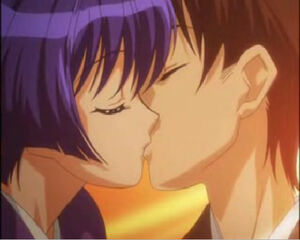 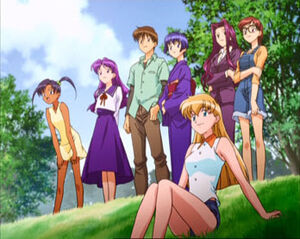