Aoi Tategami (立神あおい Tategami Aoi?) is one of the six main characters of KiraKira☆Pretty Cure A La Mode who is a second year middle school student who loves to sing. She is as brave and free like a "lion". Aoi's alter ego is Cure Gelato (キュアジェラートKyua Jerāto?) and she is based off ice cream and lions.

Aoi has azure eyes and dark blue hair worn in a volumized ponytail with tented bangs. She wears a yellow ribbon accessory. Her normal outfit consists of a white raglan top with light blue sleeves and a light blue mini-skirt under a dark blue leather jacket with a tiny gold crown pinned on the lapel, along with a pair of black and white sneakers with blue stockings/thigh highs. In the summer, she wears a light blue T-shirt with holes cut out of the shoulders and a pale yellow stripe running down the left side with a gold crown design at the bottom. She also wears light blue denim shorts along with a white belt and a gold buckle and blue leather sandals. During winter, she wears a sky blue hooded sweatshirt with a dark gray pleat skirt along with dark gray lace-up boots and blue stockings. At times she may wear her leather jacket and a pair of blue gloves. At almost all times her teeth appear fanged.

As Cure Gelato, her hair turns brighter and grows in size, resembling a lions mane, along with small forelocks and thicker bangs. She gains pale blue and white lion ears and a light blue tail with a tuft of fur on the end. She gains gold crown earrings and a gold crown on her head with a scoop of pale blue and white ice cream on it. She wears a metallic navy top with a loose, white fluffy collar and navel lining with an ice cream cone patch. The sleeve cuffs are yellow to match the flap on fabric on the chest. She also wears a white and sky blue balloon skirt reminiscent of ice cream with a light blue ribbon on her left hip where her Sweets Pact residing on it. She also gains sky blue stockings, one of which ends mid-lower leg, navy gloves with a paw design on the hand to match her ankle-length boots. On her neck is a blue choker.

In the movie, she wears a sloth costume. Super Cure Gelato has unchanged hairstyle, crown with ice cream scoop, lion ears, tail, earrings and gloves while her Cure outfit is in a super variant. She wears a ice blue vest with an ice cream cone design by her stomach area and light azure buttons by the waist. Her choker becomes a bright cerulean color and she has short, puffy sleeves by her shoulders. Her ribbon on the left side of her hip becomes light blue with the same Sweets Pact and her skirt also becomes a very light yellow and cream and the fur by her waist remains the same. She also has white fabric by her hips and white-blue socks with short length on the left leg and long on the right leg. Her boots become a very light blue with toe pattern and white wings at the back.

In her A La Mode Style, her vibrant blue hair grows thicker and wavy, with her forelocks messier. A fluffy light blue hat lines her head, with her ears getting bigger and her crown gaining more details. The collar of her jacket becomes wider and lined with more fur, with the shoulders protruding slightly. Her skirt is slightly altered, with the swirled, and white fabrics combined on the right to reveal a fluffy, pale blue section. A thick, white piece of fabric hangs from the back, reminiscent of a cape adorned with large blue spheres. On her waist are dollops of white cream. Her gloves are now completely blue with pale blue fur trim while her choker turns dark blue. She loses her socks, with one boot thigh-length while the other gains a furry yellow cuff.

Her Patisserie outfit includes blue boots with a slightly darker ribbon, a blue ribbon on her hat to match the stripes on her sleeves, and a blue, loose ribbon on the chest.

She is an enthusiastic second year middle school student who loves freedom. She is brave and free like a "lion". Due to her love for music, she sings and plays guitar in the rock band Wild Azur. When it comes to making sweets, Aoi is in charge of parts that make use of her muscular strength and support one's shape. She dislikes the strict rules and lack of freedom of her household.

Ichika Usami - Ichika is a big fan of Aoi, and is delighted when she finds that Aoi goes to her school. After becoming Cure Gelato, Aoi and Ichika become good friends with eachother.

Himari Arisugawa - Despite being almost the exact opposite, Aoi and Himari are good friends, and become quite close throughout the events of episode 35.

Ayane Misaki - Aoi was inspired by Ayane to start singing, and idolizes her. In episode 27, Aoi tells Ayane that her dream is to someday surpass her.

Kei Sonobe, Sara Asaka and Ryuuta Yokogawa - The other members of Wild Azur. In episode 42, it is revealed that Sonobe found Aoi busking on the street one day and invited her to join his band.

Tategami (立神?) - Tate (立?) means "stand" while Gami (神?) means "god". However, when combined together, it means "spirit". With the use of  a different kanji (鬣), Tategami can also mean 'Mane', which references her theme animal.

Aoi (あおい?) means "blue" (青い) which probably has something to do with her signature color.

Gelato is Italian for ice cream.

While Ichika and Himari are on their way to buy ingredients to make sweets, they overhear someone singing. They decide to check it out and see Aoi singing with her band Wild Azur, and Ichika enjoys the music. Aoi meets the two while they wait in line for some ice cream, stopping a couple of taunting high schoolers from cutting the line. Later, the band finds out that there will be a Battle of the Bands competition with Ayane Misaki, Aoi's idol, being one of the judges, so she volunteers to write the lyrics for the song. She has a difficult time coming up with anything decent, and even though Ichika tries to help her out, she still can't figure it out.

By the day of the contest, Aoi still hasn't come up with anything and starts to lose confidence when Ichika and Himari arrive backstage to give her some blue sky-inspired ice cream with a lion's face on it. Aoi takes a bite from it when she starts to have flashbacks of hearing Ayane perform live for the first time, which inspired her to become a rock singer. After eating it, she suddenly came up with the perfect lyrics for it and soon it is Wild Azur's turn to perform for the competition when Hotto, one of the Kirakiraru Thieves, attacks the stage, causing the crowd to evacuate. Ichika and Himari transform into Cure Whip and Cure Custard respectively, but Hotto's heat made it difficult for the two to hold him off. He then targets the ice cream that was kept safe in a cooler, but Aoi steps in to defend it, and her determination to protect it causes the ice cream to turn into an Animal Sweet and a Sweets Pact. Aoi then immediately transforms into Cure Gelato.

Using her newfound ice powers and lion's roar, she was able to hold Hotto off before she and the other two Cures sent him flying, freeing the Kirakiraru he consumed. Soon after, even with there being no crowd in sight, Aoi and her band perform the song she wrote and little by little, the audience returns to listen, including Ayane.

Cure Gelato (キュアジェラート?) is the Pretty Cure alter ego of Aoi. She transforms using the phrase "Cure La Mode・Decoration!". In this form, she gains great physical strength and ice attacks and can also roar loud like a lion.

Aoi on stage in episode 3

Aoi gives a thumb up to Ichika

Ichika and Aoi are confused about the lack of customers 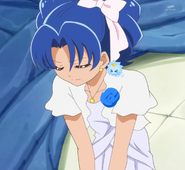 Being told by Yukari that she's pretty cool

Retrieved from "https://hero.fandom.com/wiki/Aoi_Tategami?oldid=1349191"
Community content is available under CC-BY-SA unless otherwise noted.