Heroes Wiki
Register
Don't have an account?
Sign In
Advertisement
in: Articles under construction, Animals, Anthropomorphic,
and 25 more

Ape lives with George, Shep, Tookie, and all the other animals in the jungle. When George first brought Ursula back to the treehouse, she is terrified of him until George tells her that he's harmless. At first, Ursula is shocked to find that Ape can talk. However, she eventually adjusts to it.

When George starts to fall in love with Ursula, he enlists Ape's help to seduce her. He tells George that he should use the same mating technique as a gorilla. But, these attempts did not impress Ursula.

Later on, Tookie flies to San Francisco to tell George that Ape has been captured by Max and Thor. George returns to Africa and tries to fight off Max and Thor. Finally, Ape weds George and Ursula.

Ape is an gorilla who has black fur and gray skin. He is seen wearing glasses. 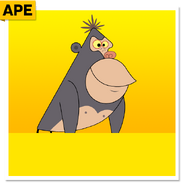 Ape captured by Max and Thor 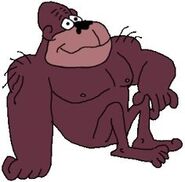 Ape from the 60s cartoon show