Sharing love and peace, Watching other people in love,


Having love affairs with gods and mortals, primarily Ares


Dione or none (mother),
Hephaestus (husband),
Ares (main lover),
Eros (depending of the version, son),
Phobos (son),
Deimos (son),
Harmonia (daughter),
Hermaphroditus (son/daughter),
all the Erotes or some of them (sons),
Priapus (son)

Seductive Deity
Aphrodite is the Olympian goddess of Love and Beauty in Greek mythology. It is theorized that she is the daughter of Zeus and Dione, whilst another theory claims that she was born from the severed genitals of Ouranos when Kronos slew him. Despite being known to have frequent affairs against her husband Hephaestus (especially with her lover Ares, the God of War), she is often portrayed in myths as a friendly, kind, benevolent, and even generous entity. The sites of Cythera and Cyprus are often associated with her, as they claim to be her place of birth. She is also frequently portrayed in many works of art, often nude. In some version she is seem as a villain while some represent her as good.

A second story however suggests a different origin. It states that Aphrodite is the daughter of Zeus and Dione.

Upon sight of the gods, Aphrodite's strikingly beautiful body began to attracted the attention of the many male gods. Zeus, fearing that her beauty would cause tension between the Olympian gods, had her married almost immediately to his son or step-son, Hephaestus, who was pleased greatly at this action. The Greek goddess Aphrodite, however did not want to be stuck with the rather plain Hephaestus for the rest of her life, and because of this, Aphrodite began her well renowned love affairs she had which resulted in many offspring by her various lovers. Her most notable lovers were the gods Ares, Dionysus, Hermes, Poseidon, and the mortal, Adonis. Hephaestus became quite jealous at times after learning of these affairs, however he seemed to accept this arrangement most of the time, happy to just have and hold her when he had the chance. Indeed, their marriage seemed companionable, with little passion perhaps, but little conflict as well.

Aphrodite has had many significant lovers, being both gods and mortals. Her primary lover was Ares, who's belligerent and violent personality attracted her. Hepheastus, upon learning this, became furious and seeked justice for Aphrodite's affair. Using his wit, he crafted skills an indesructible net and trapped the two lovers while they were in bed, then dragged them to Olympia. Upon arrival, Hepheastus demanded punishment amongst the Gods, Zeus included, but they just laughed off his statement. In the end nothing was done and things went back to the way they were beforehand, and Hepheastus learned to accept Aphrodite’s adulterous affairs.

Aphrodite has several powers and abilities that mortals should not take lightly. While it may appear as though she was uncontrolled, she had the power to affect a number of emotions in both humans and gods. She has the ability to seduce men into falling in love with her, however she prefers a more helpful solution to her powers, by helping hopeless romantics suceed in finding love in their life using her powers to charm individuals to appear more appealing amongst each other or even charming them to fall in love directly and immediately. She is also able to charm objects into present a more pleasant and attractive appearance (usually in the form of flora). 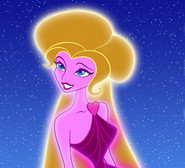 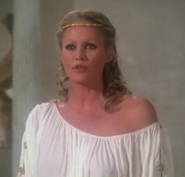