Apis is a young girl who lives on Warship Island. She is the one of the main characters of the anime and manga series One Piece. She ate the Hiso Hiso no Mi. She tried to guard the thousand year dragon Ryuji from the Marines on her own, but she was captured by Commodore Nelson. The Straw Hat Pirates helped her out and she was able to fulfill her duty. When offered to join the crew she declines and says that she wants to stay and protect the island. She is the granddaughter of Bokuden.

She is voiced by Masami Suzuki in Japanese and Chio Su-Ping (Odex) and Brittney Karbowski (Funimation) in English.

Apis is the young girl who has a londer hair tied back in a very thin braid, fair skin, and her eyes is brown. She wears a long mustard yellow dress, her sleeves and the bottom of the dress are maroon with mustard colored circles. She also wears a dark maroon sash, and has the same colored undershirt. And she has a pointy hat, white color, and red shoes.

Apis is a brave child working hard to respect her friend, Ryu, made it safely goal to help him to find on way from home. She was just terrified on the way finding Ryu, such as Luffy discovered on the secret. Apis is very caring and kind, she finds to get more emotional learns about things better than the people word, when she cries about being reach out fit her necklace into the dragon door's hole. She is very worried and frantic dangerous situations, such as Ryu's raft down the steep hillside of Warship Island, on this time, she becoming excited as Luffy does. The Straw Hat Pirates is that she is horrible at cooking who does like the food. 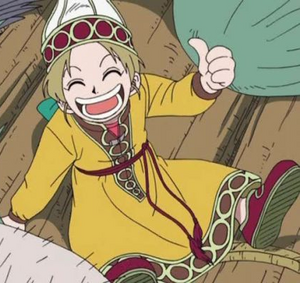 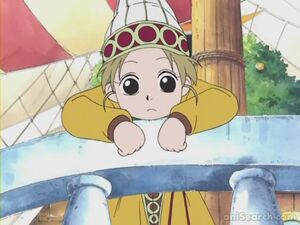 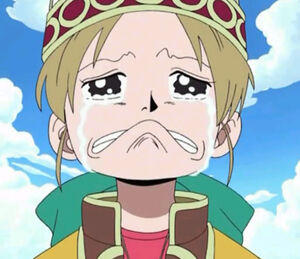