To restore the Kingdom of Khura'in's legal system (ongoing)

Truth-seeking Advocate
Apollo Justice is a defense attorney working for the Wright Anything Agency, and the deutoragonist of the Ace Attorney series. He is notable for his involvement in a test trial for the Jurist System, an effort to reintegrate the jury into court proceedings, along with co-counsel Trucy Wright, Prosecutor Klavier Gavin, and mentor Phoenix Wright.

The new defense attorney protagonist for the fourth Ace Attorney game, Apollo gets his start defending legendary ex-lawyer Phoenix Wright in the courtroom while under the tutelage of his mentor Kristoph Gavin. After Kristoph is arrested, Phoenix (who becomes Apollo's new mentor) offers him a job at the "Wright Anything Agency". Apollo uses his "chords of steel" to loudly assert his cases in the courtroom, though he is often reprimanded for this. He once told his assistant, Trucy Wright, that he often wakes up early to practice (although it normally just makes his voice raspy). Apollo is also the half-brother of Trucy, but both are currently unaware of this fact.

The bracelet Justice has helps him to read subtle changes in body language and expose lies from witnesses. When Justice feels his bracelet getting tighter during a cross-examination, he knows to focus on the witness. He inherited the bracelet from his mother.

Apollo returns as a playable character in the latest installment of the Ace Attorney series, Phoenix Wright: Ace Attorney: Dual Destinies. At one point in the game, he is injured; both his arms and his right eye are swathed in bandages, and he sports a slightly tattered long blue coat that hangs from his shoulders over his usual apparel.

Apollo Justice's likeness appears in the game We Love Golf! as an unlockable cosplay outfit for Jack.

Apollo and Klavier Gavin make a cameo appearance in the anime adaptation of Lucky Star. 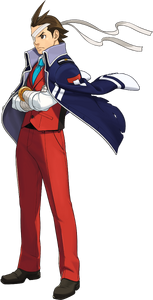 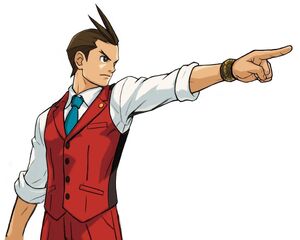 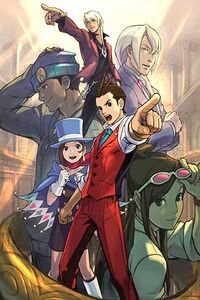 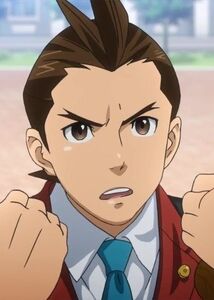 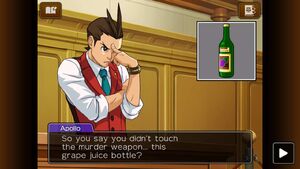 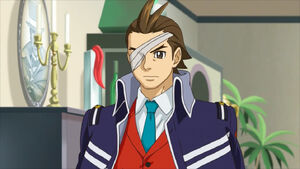 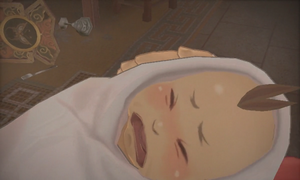