Hanging out with Momo.

Stay by Aang's side. (succeeded)

Appa is a six-legged flying bison as well as a major character in Avatar: The Last Airbender. He is the animal companion of Aang, the Avatar. He was frozen with Aang for a hundred years, and both of them together were original members of the Team Avatar.

There was little said about Appa's personality, as he lacked the ability to speak human language. However, he had displayed an ability to understand human language on several occasions. He was also afraid of going underground and since his experience in the Fire Nation circus, of fire. Appa seemed to have a reasonably trusting attitude, as he did not take long to accept the apple offered to him by Aang, to whom he became incredibly loyal and devoted, and took an immediate liking to Sokka when he first saw him. However, this trait was damaged due to his experience with the ringmaster and the sandbenders. In these difficult moments, Appa seemed to have similar feelings toward humans when he missed Aang and he tried his best to find the team. In the Eastern Air Temple, he also remembered with sorrow his childhood with his siblings and his mother.

Appa also might have had some degree of intelligence as shown when he yawned after Aang prompted him, and when he apparently "scolded" Hawky and Momo when the two fought due to Sokka's order that Appa was in charge. Appa's intelligence was also shown when he was taking the team and Professor Zei to Wan Shi Tong's library. Zei asked Appa a question and Appa tried to respond, only letting out a groan.

Being a sky bison, Appa possessed the ability to fly. He utilized his airbending for this purpose; his tail appeared to be the main driving force behind his bending, but he also had shown the ability to accomplish it with his mouth. Despite the tranquility related to his personality as well as his species, Appa had shown himself to be capable of fighting whenever necessary. With his bending, Appa could create powerful gusts of air with just a flick of his tail and could gain an advantage over his opponents by hovering. He even defeated Long Feng, Ty Lee, and Mai.

Due to his size and mass, it took a lot of energy for him to stay aloft. As a result, Appa could not fly for an extended time and periodically required stopping and resting. However, there were times when he displayed extreme stamina, such as when Katara stated that they flew two days non-stop, as well as when Appa continually had to fly in order to avoid Azula, Ty Lee, and Mai for hours on end with only a few minutes of rest each time he stopped. He was also capable of carrying quite a burden on his back, having once carried seven medium-weight people in one journey.

Being a bison, he had a great deal of brute strength and endurance. The best demonstrations of this were in the fight against Nyla in the abbey, and against a fully-grown boar-q-pine in the forest. His strength was so great to the extent of Appa lifting two Fire Nation tundra tanks simultaneously each by the horn, flipping them over. Using his teeth alone, he was capable of grabbing Long Feng by his leg and throwing him a great distance.

Appa was also capable of swimming, even being a fairly adept swimmer, however, he would more frequently fly or walk rather than swim. 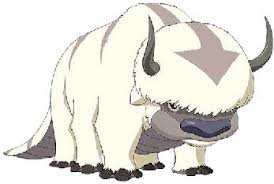 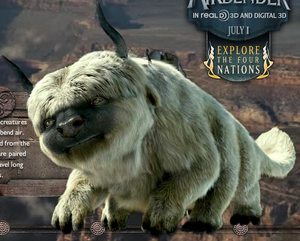 Appa in The Last Airbender