Applejack is a cowgirl Earth pony and one of the six main protagonists in My Little Pony Friendship is Magic. She lives and works at Sweet Apple Acres farm with her grandmother Granny Smith, brother Big Macintosh, little sister Apple Bloom, and a pet dog named Winona. She represents the element of honesty. She is hardworking and she can be very stubborn when it comes to help.

She is voiced By Ashleigh Ball who also voiced Rainbow Dash

Applejack was the last one in her class to get her cutie mark, a trait that seems to run in the family. The young Applejack leaves the farm to live with her upper class relations, the Oranges, in the big city called Manehatten (a play on words based on a real city, Manhatten). Once there however, she finds it hard to fit in and becomes terribly homesick. The rainbow left in the wake of Rainbow Dash's sonic rainboom leads her to return home to the farm. Once there she realizes that she truly belonged there, and finally gains her cutie mark.

Twilight Sparkle first meets Applejack and the rest of the Apple family when checking up on food preparations for the Summer Sun Celebration. In the second episode, when Twilight Sparkle is about to fall off a cliff, Applejack convinces her to let go so Rainbow Dash and Fluttershy can catch her. This action is later explained as representative of Applejack's honesty, in the rather contrived fashion of not telling Twilight Sparkle why she had to let go, and simply asked Twilight Sparkle to trust her, possibly because Twilight Sparkle would have panicked otherwise.

Throughout the series, Applejack tells Twilight Sparkle about the way things are in Ponyville. She gets upset with Twilight for using magic for Winter Wrap Up, and tells her "That's not how we do it 'round here, Twilight, and especially not on MAH farm." She explains to Twilight in Feeling Pinkie Keen that "those of us who have been in Ponyville a while, have learned over time that, if Pinkie's-a-twichin', you better listen."

In her first appearance (Rescue from Midnight Castle), she was one of four ponies to be corrupted by Tirek's Rainbow of Darkness in order to pull his chariot. She was reverted back to normal after Tirek was destroyed.

Applejack received positive feedback from fans (also known as Bronies) and others, and was one of the most loved main character of the series.

Pony Physiology: Applejack is an Earth Pony who lives and works at Sweet Apple Acres with her grandmother.

Expert Cook: Pinkie Pie describes Applejack as "one of the best bakers ever".

Expert Herding: She stops a cow stampede with only the help of her dog, Winona.

Expert Music Player: Applejack can play the harmonica and the fiddle.

Enhanced Eating: Applejack possess a huge appetite. Granny Smith recalls the time when an Apple family relative found Applejack as a foal eating all the apple fritters, showing that she had the appetite of a "full-grown stallion". 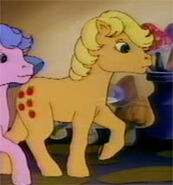 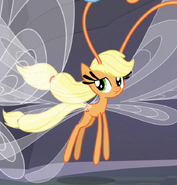 Applejack as Breezie It Ain't Easy Being Breezies

Applejack, Fluttershy, Rainbow Dash and Rarity screaming comically
Add a photo to this gallery
Retrieved from "https://hero.fandom.com/wiki/Applejack?oldid=809090"
Community content is available under CC-BY-SA unless otherwise noted.