April O'Neil is one of the protagonist of Teenage Mutant Ninja Turtles.

She is voiced by Mae Whitman, who voices Katara from Avatar: The Last Airbender, Little Suzy from Johnny Bravo, Shanti from The Jungle Book 2, Tinkerbell from The Tinkerbell movies, Kimi from Family Guy, Batgirl from DC Superhero girls, and Rose Killdragonosa from American Dragon: Jake Long.

Her shoulder-length bright orange hair is tied with a white ponytail holder which becomes undone at times, if she is under great stress or rage.

Unlike her previous counterparts, she is a sixteen-year-old teenager (as opposed to being a young adult in her late twenties) and possesses exceptionally strong psychic powers, which she eventually learns to develop more and increase drastically throughout the fourth season. This is due to her being a half human, half Kraang-mutant as her mother was abducted and experimented on by the Kraang before she was born. Her inherent psionic abilities are first hinted at in Episode 7, "Monkey Brains", when she had detected that a mutant-monkey was, in fact, a human scientist; merely saying that she "sometimes get a feeling about things", implying that she possesses extrasensory abilities as well. It even enabled her to hear far off sounds that Splinter, with his superhuman hearing, could not.

Befriending the Turtles after they rescue her from the Kraang, she is a valuable and dependable ally; able to go up the surface in broad daylight when the Turtles cannot. She is later offered by Splinter to trained in ninjutsu in order to become a full-fledged kunoichi. Her original weapon was a metal tessen fan, but later earns a special tantō sword to symbolize her high status as a ninja. At one point, April had a brief falling out with the Turtles when their cockiness had caused her father Kirby to mutate into a bat. Sometime later, she and Casey come under attack by the Foot Clan, forcing her to put an end to her grudge and call the Turtles for help. She later forgives them after that. She is mentally capable of sensing the presence of others nearby, seeing into a person's very soul, and psionically hearing the thoughts of the Kraang. Under pressure, she emits an incredibly strong psionic wave that incapacitates those around her. At one point, she displayed the telekinetic ability to levitate several cards in midair, and became mentally linked with a fish-bird-worm mutant.

In the 14-episode Outer Space saga (the first half of Season Four), April donned a yellow spacesuit that resembles her 80's suit and used a ray gun for defense. For the second half of Season 4, it is now black with yellow stripes to indicate her high status as full-fledged kunoichi. Upon being given a small fragment of the mystical Sol Star from the ancient Aeons, her inherent psionic abilities have further developed and grew considerably much stronger; to the point of having full and far greater use of her telekinesis, mentally detect lies and discern truth from her victims, and sense incoming danger. She even began telekinetically controlling the direction of her metal tessen fan, making its targeting range more accurate from a distance. She eventually learned to erect an exceptionally strong telekinetic shield for defense, make a soft landing, and lift herself and her friends in the air by encasing them in a light yellow orb of telekinetic energy. In addition, she is now fully capable of tracking mutants, wherever they may be; another of the many more psychic and extrasensory abilities her Sol Star necklace helped her to develop. According to Splinter, her natural intuition is very near perfection, as it is one of the many powerful psionic abilities that she possesses.

In the fifth and last season of the show (titled Tales of the Teenage Mutant Ninja Turtles), April continues to be there for the Turtles and help them adjust to moving on with their lives without Splinter. Unfortunately, her innate, extraordinarily strong mental powers prove to be ineffective against the mighty demodragon, Kavaxas, as he is not of the earthly plane. She worked together with Karai in finding Bebop heading to Don Visiozo's restaurant, where a vial containing the heart of the Super Shredder was being held. Aware of the Seal of the Ancients power over Kavaxas, she attempted to use it by combing its dark magic with her own growing sensory abilities, but was unsuccessful. Intrigued by her unique nature, Kavaxas desired to sallow her very essence in order to obtain her increasingly powerful mental/mind-based abilities for himself.

As the showdown between Kavaxas and the reivied Zombie Shredder grew imminent, she, Casey and the Turtles were approached by several Foot cultists, April psionically detected a change of heart from Fishface. Later, she stayed with Casey, Raphael and Donatello, to try and stop the dozens of spirits' of the departed with Donnie's new specter-destroyers. She was amazed by the sudden arrival of Splinter's spirit, who had arrived to hold off Ho Chan. Afterwards, she, the Turtles, Karai and Leatherhead, all bed their final goodbyes to Hamato Yoshi's spirit, as he returned to the afterlife. She was soon comforted by the appearance of the sunset, as she was sure that they would never see one again and remained to enjoy its everlasting beauty and warmth before heading back to the Lair.

Some time later, April fought alongside the Turtles, Mona Lisa, and Karai to put an end to the rogue Salamandrian called "the Newtralizer". When he blasts with his electrical bursts, she defended herself by erecting a yellow shield out of telekinetic energy. 0She used her extraordinarily strong telekinesis to open the water pipes, which appeared to weaken and disorient him. When Lord Dregg later invaded, she joined Raphael, Mona Lisa and Bishop in the Turtle Mech to try and overpower his spaceship. Once confronting Dregg directly, she tried to hold him off with her tantō sword but he proved too strong.

In a three-part special episode, which is somehow set in a fifty-year apocalyptic future, "Raphael: Mutant Apocalypse", April is killed along with the entire human population and most mutants from being hit with a mutagen bomb that had been mysteriously triggered by an unknown adversary. Unfortunately, she was not able to protect herself from the massively powerful blast with her extraordinarily strong psionic powers.

In "The Curse of Savanti Romero", she is turned into a vampire-zombie and utilized her incredibly strong psionic/extrasensory powers against the Ninja Turtles. In "The Frankenstein Experiment", she is ordered by her "master" Dracula to seek out the Turtles and eliminate them. In the Lair, she succeeded in biting Donatello and turning him into a full vampire as well. She returns to normal at the end of "Monsters Among Us" when Mikey kills Dracula. Leonardo explains to her about their time-traveling ally Renet, that she is "the greatest time master that ever lived."

In "Wanted: Bebop & Rocksteady", April and the Turtles meets the 1987 counterparts of the Ninja Turtles, who seeks help to stop Krang and Shredder, who recruited the present Bebop and Rocksteady. In "The Foot Walks Again", April and Casey split from the Turtles, who are busy training their 1987 counterparts, to find Karai and Shinigami to stop Bebop and Rocksteady from working with Kraang and the Shredder of the 1987s dimension.

In "The Big Blowout", she fought alongside all eight Ninja Turtles, Casey, Karai, Shinto witch Shinigami and three members of the Mighty Mutanimals-Slash, Leatherhead and Mondo Gecko- to put an end to Krang and Shredder, unknowingly putting an end to Bebop and Rocksteady's villainous ways in doing so. During the heated skirmish, she had saved the two Donatellos from being crushed by stopping the two rock monstrosities in their tracks telekinetically. She tried to utilize her extraordinarily strong mental powers on Krang, but he had blasted her with a purple energy ray, which seemed to have an effect on her and her growing extrasensory abilities. After Krang and Shredder plans for inter-dimensional annihilation were thwarted by none other than Bebop and Rocksteady, she promoted the former villains to stop robbing banks and working for supervillains. 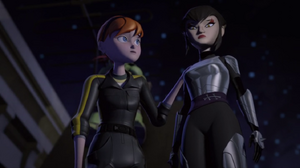 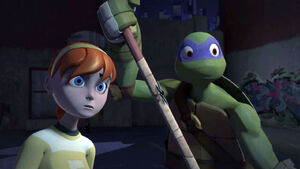 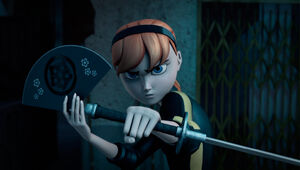 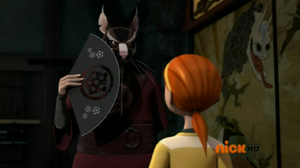 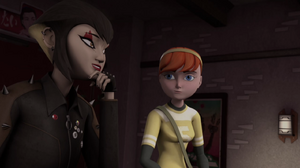 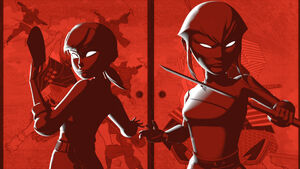 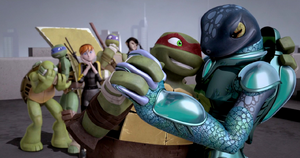 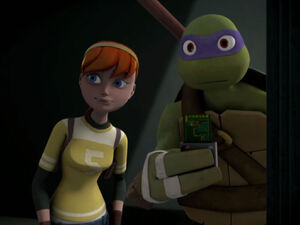 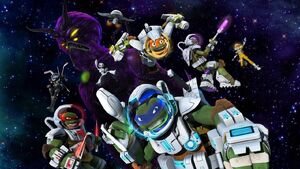 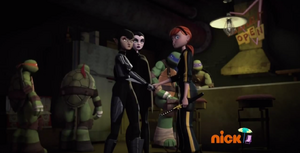 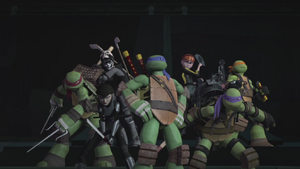 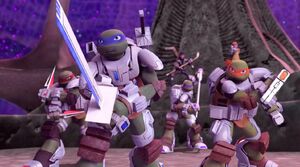 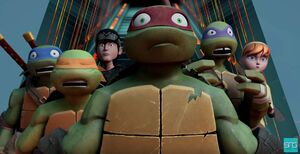 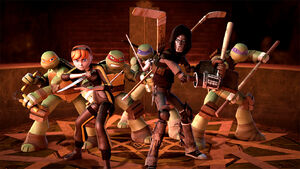 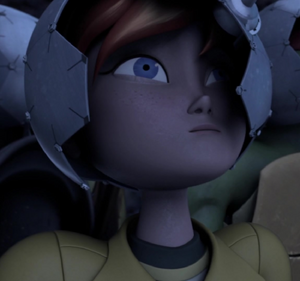 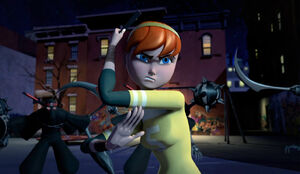 Retrieved from "https://hero.fandom.com/wiki/April_O%27Neil_(TMNT_2012)?oldid=1756115"
Community content is available under CC-BY-SA unless otherwise noted.