April O'Neil is the overall main protagonist of the 2018 Nickelodeon TV series Rise of the Teenage Mutant Ninja Turtles.

She is voiced by Kat Graham who plays Bonnie Bennett from The Vampire Diaries.

April wears a black choker around her neck, a long yellow t-shirt and a green jacket with quarter sleeves, pale green trim and stripes, single button, and an "S"-like logo over the jacket‘s heart and back. She also wears navy blue leggings and yellow sneakers.

April is very upbeat, sassy and much more loud than her previous incarnations. She is also aggressive and quick to jump into action, showing that she also has more spunk, confidence and spirit.

April is shown to be incredibly brave as seen in "The Gumbus" when she was enjoying the whole fiasco in the Stock 'n' Shop while Mikey and Leo were freaking out. In "War and Pizza", April is very determined and would never give up as seen when she tries to get through Timmy's birthday without any disruptions.

Despite this, she can be rude at times. Like in "The Fast and the Furriest" when Donnie accuses her of stealing the Turtle Tank and, being annoyed by them breaking in and being accused of something she didn't do, uses a bat to get them out via window.

She's quite agile and powerful on her own. Her fighting style screams out Street Fighting. She also has natural talent for improvisation. 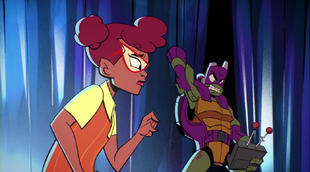 Retrieved from "https://hero.fandom.com/wiki/April_O%27Neil_(TMNT_2018)?oldid=2151681"
Community content is available under CC-BY-SA unless otherwise noted.