Aid the Turtles in defeating Shredder

April O'Neil is one of the main protagonists of the Teenage Mutant Ninja Turtles paramount film universe. She is a "lifestyle reporter" for channel 6 news.

She is portrayed by Megan Fox (as an adult) who also portrays Mikaela Banes from the first 2 Transformers films, and by Malina Weissman (as young) who is best famous for playing Violet Baudelaire.

As an adult, April worked as a local reporter for Channel 6 Eyewitness News in New York City, investigates a crime wave by a group of criminals called the Foot Clan. At a dock at night, she sees the Foot raiding cargo containers. After an unseen vigilante attacks the thieves, April notices a symbol left behind. April's supervisor Bernadette Thompson and her coworkers are oblivious to her story. Later while covering a charity event thrown by Sacks Industries, April expresses gratitude to the company's CEO Eric Sacks, who was her late father's lab partner.

April, at the scene, becomes a hostage herself. Four mysterious figures arrive, take out the Clan, and free the hostages. April follows them to a rooftop and is shocked to see that the vigilantes are anthropomorphic mutant turtles, causing her to pass out. When she regains consciousness, they advise her not to tell anyone of them. As they leave, April hears Raphael and Leonardo's names.

April returns to her apartment and remembers "Project Renaissance", her father's science experiment, which involved four turtles named Leonardo, Donatello, Michelangelo, Raphael, and a mutated rat called Splinter. Unable to convince Bernadette of the Turtles' existence, April is dismissed. Her coworker Vern Fenwick drives her to Sacks' estate where she confides in him about her discovery. Sacks believes her and reveals that he and April's father had been experimenting on a mutagen created to cure disease, which was thought lost in the fire that killed her dad.

Turtles bring April to their sewer lair. Splinter explains April had saved them all from the fire and freed them into the sewers. The mutagen caused the five of them to grow and develop humanoid attributes. Splinter took on the role of their father, using April's father as an example. After finding a book on Ninjutsu in a storm drain, he proceeded to teach himself, then the Turtles, in the fighting style. When April reveals she told Sacks about her discovery of the Turtles, Splinter informs her that Sacks turned on her father and killed him.

April comes out of hiding and she and Raphael plan to save the others. Raphael, April, and Vern storm the estate and free the other Turtles. The group then escapes the compound in pursuit of Sacks.

April and Vern subdue Sacks in the lab, while the Turtles are battling Shredder on the roof. As the turtles try to keep it from falling and infecting the city, April confronts Shredder with the mutagen. In the struggle, the tower collapses and the Turtles pull April onto it with them, while Shredder falls to the street and is captured by the police. Believing they are about to die, the Turtles confess their secrets, while Raphael gives an impassioned speech of his love for his brothers before they land harmlessly on the street. They vanish before the humans find them and return to the sewers, where they give Splinter the mutagen and he begins to recover.

Sometime later, April meets with Vern, who tries and fails to ask her on a date. As police respond to the explosion, the Turtles leave, but not before Mikey tries to serenade April with "Happy Together" by the band The Turtles, much to his brothers' annoyance and April's amusement.

Teenage Mutant Ninja Turtles: Out of the Shadows

Two years later, April has apparently returned to Channel 6, although she also acts as the Turtles' 'human contact', such as discreetly observing Baxter Stockman to confirm his ties to the Foot when the Turtles would be unable to get close enough to him. In the course of the film, she meets corrections officer Casey Jones when he is attempting to track down the Shredder and new mutants Rocksteadyand Bebop after all three escaped during a prison transit that Jones was supervising.

During her investigation, April discovers and loses a canister of the purple mutagen used to transform Rocksteady and Bebop, prompting Raphael to convince April and Casey to help him and Michelangelo break into police headquarters to recover it from the evidence room after Donatello's research revealed that the purple mutagen could make the Turtles human. In the process, April and Casey are arrested when they act to protect the turtles from the police, but during the subsequent interrogation April refuses to give up any information about the Turtles, stating firmly that they are not monsters. Stockman attempts to frame April for industrial espionage and sabotage by providing the police with doctored footage of April stealing the purple mutagen, but Verne is able to find the original footage showing April escaping the just-mutated Rocksteady and Bebop and clear their names, allowing April to call the Turtles for help.

At the conclusion of the film, April is shown delivering a news broadcast on the turtles' role in saving the city, although she again avoids identifying them in order to let them continue to operate in secret. 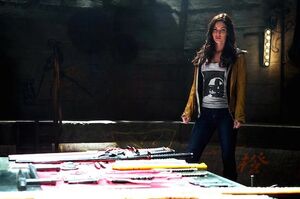 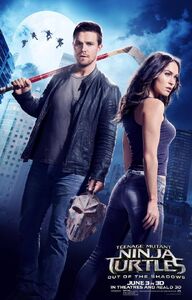 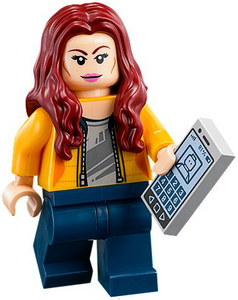