Spending time with Terra and Ventus.

Escape from the Realm of Darkness and find Terra and Ventus (succeeded).

Aqua is one of the main protagonists of Kingdom Hearts Birth by Sleep. From the view of the story, it is revealed she is one of the Keyblade Wielders before Sora. Like Terra and Ventus, it is her dream to become a Keyblade Master, a dream she is the only of the three to accomplish.

Her name is Latin for "water", while Kairi's name in Japanese means "sea". The only connection between the two is that Aqua met Kairi in Radiant Garden in Kingdom Hearts Birth by Sleep and put a protective spell on her necklace, which later brought Kairi to Destiny Islands. Kairi, by accidentally touching Aqua's Keyblade during this time, also inherited the Keyblade from Aqua. The official Japanese website refers to Aqua as the "Dancing Waters Forming Bonds".

She is voiced by Willa Holland in the English version and Megumi Toyoguchi in the Japanese version.

Aqua is the most self-willed of the trio of protagonists in Birth by Sleep. She displays true elegance while fighting, and will do anything to protect her friends. When relaxed she can be very gregarious and comedic, but when angered, she can become bellicose.

Aqua bears some similarities to Kairi and Sora, primarily in her sisterly affection for her closest friends. This is displayed by when she makes lucky charms for them, does everything in her power to guard Ventus (despite his apparent discouragement when she tells him to go home), has confidence that Terra will overcome the darkness, and when she strands herself in the Realm of Darkness in order to save him.

Aqua is also shown to be very sociable with kids, quickly befriending Kairi, Sora, and Riku. Aqua is remarkably even-tempered and dead-set on her goals, and only threats on her loved ones seem to make her lose her composure. Although, like Sora, Aqua is comedically insecure in a romantic sense, so when Zack asks her out on a date, she shakes her head, wildly waves her arms, avoids eye contact, stutters, and blushes, desperately trying to compose herself. She also quickly changes the subject when Hercules asks why her face is red.

Aqua is typically modest, referring to herself as a trainee (only calling herself "Master Aqua" before she fights Terra-Xehanort, even then only as an intimidation tactic) and acting very respectful toward elders and authorities such as Master Eraqus, Queen Minnie and the Grand Councilwoman. However, like Eraqus, Aqua is also firm, obstinate, and overprotective, which sometimes makes her seem condescending. She always worries about Ventus because of his age and lack of experience, ordering him to head home when she finds him without giving him a chance to prove himself.

However, despite her flaws, when the situation demands it, Aqua's overall skill, determination, wisdom, and kindness make her the most reliable and competent out of Eraqus' apprentices, and unquestionably worthy to be a Keyblade Master.

Aqua looks slightly like Kairi, but older. She has a tall and slender figure, about as thin as Ventus and standing a few inches shorter than Terra. She has blue eyes and medium-length icy blue hair, mostly parted to her left. She wears a black and navy blue, high-collared halter top, a black corset with two pairs of white laces, and black shorts. She has two pink straps intersecting over her chest, with a silver badge similar to badges also worn by Ven and Terra over the intersection. On Aqua's arms are white bell-sleeves and tan, fingerless gloves. She also wears a small, segmented piece of armor on each of her upper arms. She wears black stockings reaching about halfway up her thighs, leaving a small area of bare skin. There are two strips of blue cloth draped over each of her hips, along with a smaller, white strip of cloth tied around her waist and draped in the same manner. Her silver boots are pointed and armored, with a sharp "hook" on the outer side of each. When under the corruption of darkness from the attack by Ansem, Seeker of Darkness, during her time trapped in the Dark Margin, her clothes become tattered and frayed, are in shades of purple and black, her fingers/gloves now look to be stained in blood, similar to the red fingers on Soldier Heartless, and her eyes and hair now sport coloration similar to Master Xehanort's with being golden and bleached blue respectively. When the corruption is expunged, her appearance returns to normal.

By touching the piece of armor hanging on her arm, Aqua will become full clad in her Keyblade Armor. In Birth by Sleep, Aqua's armor is mostly colored in shades of silver, black, grey, purple, and blue. Notable additions include a silver breastplate resembling an upside-down crescent moon and a dark-visored helmet. Her helmet, like Ventus and Terra's, bears two prongs on either side, with her silver ones wrapping around the sides and angling diagonally downwards. Her cape is that of a dusty-rose color. In Kingdom Hearts Birth by Sleep, Aqua's armor remains largely unchanged, though she loses her cape and grey becomes a more dominant color than black or blue. She also gains more armor near her upper legs and hips.

Aqua is a skilled magic user and is a Keyblade user who has proven herself to be a formidable combatant while in battle. The Keyblades she uses all focus on magical strength.

She has the most expertise in magic compared to Terra and Ventus, utilizing a barrage of spells as her style, and can use Barrier to completely protect herself. Aqua's magic also gives her access to elemental spells, including special variations of Fire, Ice, and Thunder. 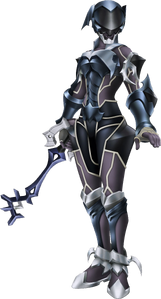 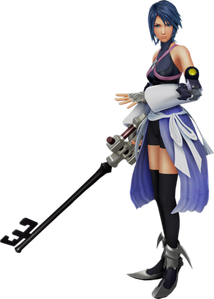 Aqua as she appears in Kingdom Hearts 0.2 Birth by Sleep -A Fragmentary Passage-. 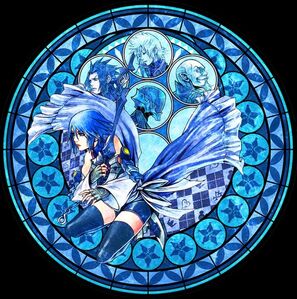 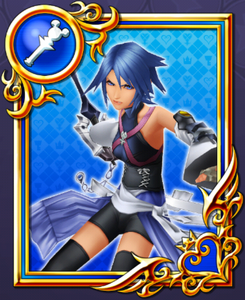 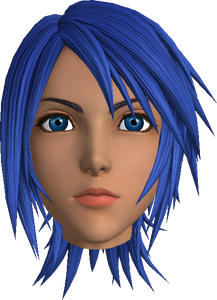