Aqualad (real name Kaldur'ahm and human name Jackson Hyde), is a fictional character and superhero that appears in comics created by DC. The character made his first appearance in the Young Justice animated series, and was later introduced into the comic continuity. He is an aquatic superhero who is a hybrid, being able to transform with gills and manipulate water and electricity.

He is the partner of Aquaman and became the new "Aqualad" after the original, Garth, left the title and became "Tempest". He is also the son of Aquaman's archenemy, Black Manta, and was named after the supervillain's henchman, Calvin "Cal" Durham. When Arthur left the planet to Mars, Jackson took on the duties of "Aquaman", and was later dubbed so by the media. He is a member of the Aquaman Family, Teen Titans, and a reserve member of the Justice League and Young Justice.

He was created by Brandon Vietti, Greg Weisman, and Phil Bourassa, and first appeared in the Young Justice animated series, and made his comic debut by the writer Geoff Johns and artist Ivan Reis, first appearing in Brightest Day #4 in August of 2010.

On New Earth, Kaldur'ahm is the son of the supervillain Black Manta and an unnamed mother, and his name is a reference to the villain's henchman, Calvin "Cal" Durham. He was adopted by the Hyde's and given the name Jackson, and they taught him at a young age to be afraid of water, as they didn't want his real parents to locate him and were afraid he would change.

Though Jackson would attempt to get this a secret to his friends and girlfriend, his powers would manifest when he was outside in the rain. His adopted parents then revealed that he was adopted after they were given him by Mera, who told the Hyde's to keep him away from his biological father. At that moment, they were attacked by Black Manta, but he was defeated by Jackson with the assistance of Aquaman, Mera, and Aquagirl. After the event, Jackson became Aquaman's partner and a member of his family.

Jackson Hyde is the son of David Hyde, who was the supervillain Black Manta, and Lucia Hyde, a Xebelian who fell in love with David. Lucia soon learned that David only wanted an artifact called the Black Peral, and knew that she knew the location of the map that would lead him to the artifact. Though pregnant with his child, Lucia decided to flee to from the sea to the surface world with the map, and moved to New Mexico. She immediately noticed that Jackson inherited her Atlantean physiology, and moved far away from water and attempted to keep the truth from him. During his youth, Jackson wanted to learn of his true heritage, but his mother refused to tell him about his father or allow him near water. Though she controlled most of his youth, Lucia did allow him to have the map that she kept in a necklace, and Jackson later revealed his sexuality to his mother.

One day, Jackson saw a video of a group of teenage superheroes stopping a threat, and he decided to join them so he could find a purpose for his powers. Going to San Francisco, Jackson managed to enter Titans Tower III by getting permission by Goliath, a bat dragon. Once in the tower, Jackson met Robin, Starfire, Raven, Beast Boy and Kid Flash, who questioned how Hyde managed to enter the tower without them noticing. Hyde then told Robin that he wanted to join their team, but Damian dismissed him as he believed the Teen Titans didn't need another member. The conversation was stopped as report came that King Shark had taken over a prison, and the team left while Jackson was left there. Despite being dismissed by Robin, Jackson decided to help the group, and managed to use his powers to bring King Shark to the sea and defeated him.

After defeating the supervillain, Jackson was brought into the team, and Robin gave him a Robin diving suit as a placeholder costume until he was given one. Hyde would help the Titans on several missions, and continued to undergo training from Robin even after Kid Flash was kicked off the team. When his mother called him to meet at a café, Jackson asked her about his true heritage and who his father was. Though Lucia didn't tell him that his father was Black Manta, but informed Jackson that his father was a evil man, and that if he knew of his existence, he would kill him. She also reveled that Jackson inherited his powers from her, and that she was an Atlantean who left the seas. Jackson was alerted to Starfire about a robbery, and left the café but returned after Beast Boy had taken care of the situation. Returning to his mother, he found her battling Black Manta, who revealed to Jackson that he is his father.

Upon being defeated by Black Manta, Jackson offered to go with his father if he didn't hurt his mother, and David agreed to brought him to his sub. Manta then took the necklace off of Jackson to use the map, and the two came across the Black Pearl at the bottom of a trench. Jackson was then attacked by a creature, and Black Manta rescued him only so Jackson could open the seal to get the Black Pearl. Realizing this, Jackson attacked his father, and was later supported by the Teen Titans, being able to defeat Manta with the use of electricity. After defeating Black Manta, Jackson and the Teen Titans were greeted by Garth, who was the original "Aqualad". Garth told Jackson that he was proud of him for defeating the supervillain, and offered him a symbol that allowed Jackson to become the new "Aqualad". The Teen Titans and Lucia then gave Jackson a party, celebrating his heroism and succeeding the title.

The Teen Titans later wanted to bring back Kid Flash to the team, deciding to go behind Robin's back to travel to Central City. Kid Flash informed the group that he just left Deathstroke's team Defiance, and only agreed to return if Damian gave him a formal apology. After helping Robin defeat Onomatopoeia, Damian apologized to Wallace and he was allowed to come back to the team. 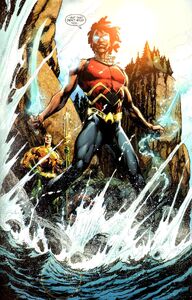 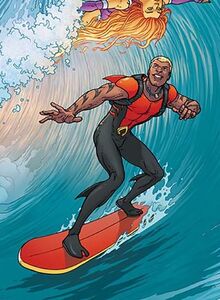 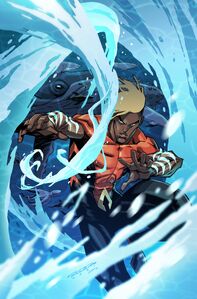 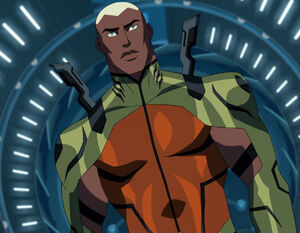