Rescue Poki and Piki and save Subcon from Wart (both succeeded)

Each other
Poki
Piki
Rusa (pet)

The game takes place inside a book. The book's story tells of the land of Muu (which name was changed to Subcon for Super Mario Bros. 2), where the quality of dreams determined the quality of the weather the next day. Because of this, the Muu citizens invented a dream machine so they could always have good dreams. One day, an evil toad named Mamu (whose name was changed to Wart for Super Mario Bros. 2) invaded the land and twisted the dream machine into a nightmare machine. However, the Muu people learned of his weakness to vegetables and used them to defeat him.

The book had found its way into an Arabian family. Their pet monkey, Rusa, gives the book to twins Poki and Piki. However, the twins quarrel and end up ripping out the last page of the book, causing its ending to be erased. Mamu, freed, reaches through the pages and grabs the twins, pulling them into the book. Rusa gets the twins' parents, Mama and Papa, their brother, Imajin, and Imajin's girlfriend, Lina, and they enter the book to both rescue them and save the Muu citizens by defeating Mamu and his army of monsters. 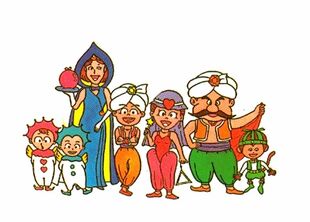 The four playable members of the arabian family alongside Poki, Piki, and Rusa.

From left to right: Imajin, Lina, Mama, and Papa.

The family chasing Mamu.
Add a photo to this gallery
Retrieved from "https://hero.fandom.com/wiki/Arabian_Family_(Doki_Doki_Panic)?oldid=1750581"
Community content is available under CC-BY-SA unless otherwise noted.