The Aragane Twins (鋼姉弟) are a pair of young, twin ninja who are members of the Oboro Clan and minor heroes in the 2002 videogame Shinobi. both Akagane Aragane (銅) (the female) and Shirogane Aragane (銀) (the male) form a fearsome duo; Akagane with twin sickles, and Shirogane with a weight and chain.

Found abandoned in the mountains by Kobushi as orphan children of the Aragane family, the two would be taken in by Kobushi as his adopted children and raised by him. During this time they would come to meet Hotsuma, who would act as their instructor for a time as Jonin.

Akagane, the elder sister, has a bright personality, but to get past her sadness from abandonment, she placed herself into her training on a daily basis to get better. She would grow attached to Hotsuma, who shared similar circumstances as her, but somewhere along the line she began to develop a longing for Hotsuma, which grew into a precocious crush.

Shirogane, the youngest twin, is a shy and gentle boy who is often hidden behind his big sister. While not very bright, he is quite strong. While initially Kobushi didn't see any talent in him, he trained Shirogane so that he can be strong enough to protect his sister. Shirogane swore an oath of obedience to his sister, and vowed to protect her with his life.

Four years later, the Oboro Clan were attacked by an old enemy of theirs known as Hiruko Ubusuna who used his dark magic and the summoned legions of Hellspawn demons to slaughter and later possessed the ninjas including the Aragane Twins one by one.

They both ask Hotsuma to kill them, knowing that if they are left alone, they will end up hurting innocent people. Despite Hiruko's control over them, they show great respect to Hotsuma by calling him "Master" (senpei). In the end, they are both defeated by Hotsuma and are given the death they asked for as their souls were freed from their torment. 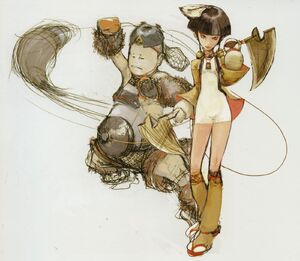 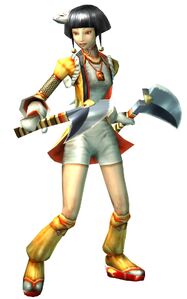 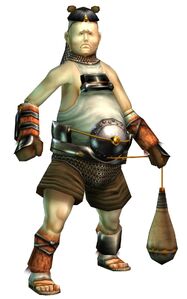 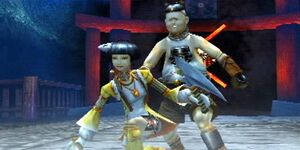 The Aragane Twins are in torment because they were controlled by Hiruko's dark powers.

Hotsuma defeated his most dear 2 apprentices and freed their souls from Hiruko's control.
Add a photo to this gallery
Retrieved from "https://hero.fandom.com/wiki/Aragane_Twins?oldid=1083883"
Community content is available under CC-BY-SA unless otherwise noted.